Cairo to build new site for culture but will artists and fans come?

Egypt has announced that it will build a state-of-the-art culture city by mid-2022, but it remains unclear whether it would attract artists and art lovers. 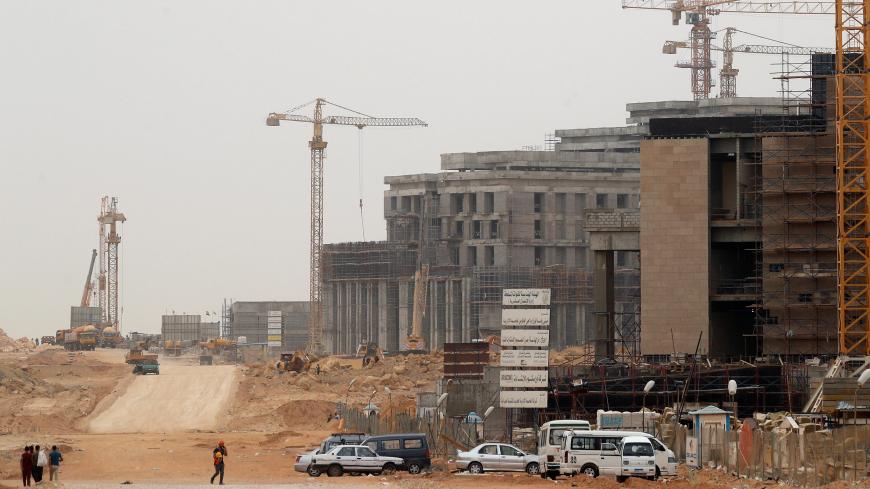 Construction machines and labourers work at the future headquarters of the Council of Ministers in the government district of the New Administrative Capital (NAC), east of Cairo, Egypt, May 2, 2019. - REUTERS/Amr Abdallah Dalsh

A new Egyptian arts and culture city is set to be built on the outskirts of the capital Cairo as artists and intellectuals disagree over its effectiveness and whether it would contribute to boosting Egypt’s art industry.

The city, which is located in the new administrative capital, should be completed by mid-2022.

The city is built on an area of ​​127 acres and includes a number of high-tech theaters, galleries, libraries, museums and art galleries for all types of traditional and contemporary arts, including music, painting, sculpture and handicrafts. The art spaces are completely separate from those in the capital and will be rented to galleries and artists who are willing to showcase their artworks in the new city.

An important component of the city is the Opera House with its main hall that can seat 2,000 people, as well as two theaters of music and drama, and a wax museum.

"It is a global cultural city that will serve as a platform for arts and culture for the whole world. The building of this city and its projects will have a positive impact on Egyptian cinema and restoration of the spirit of authentic Egyptian culture,” Ahmed Zaki Abdeen, president of the new administrative capital, said in press statements in January.

Abdeen noted that the city will become a major venue for large classical music concerts, because the grand theater of the Opera House downtown cannot accommodate more than 800 people, so major performances sell out quickly.

Artists, tourism experts and economists have praised the establishment of the cultural city. They, nevertheless, maintain that the Egyptian government should not only focus on establishing well-designed buildings but rather devise a plan to attract artists to the city and organize world-class performances.

Hanan Shoman, an art critic who writes for Youm7 newspaper, told Al-Monitor that the new city will be equipped with the latest technologies and will attract art enthusiasts.

However, she noted that arts and culture have nothing to do with buildings. “This arts and culture industry is more concerned with what is going to be shown in theaters, the Opera House, galleries and libraries [not just how large the buildings are],” she added.

“The state has to focus more on raising social awareness about culture and producing strong performances, because the state can build the largest opera house, theater and library, without an audience seats would remain empty,” she added.

Shoman said that art studies should be fully integrated into the school curricula and TV shows should focus on raising awareness of culture and art.

According to Minister of Culture Enas Abdel Dayem, Egypt is currently working to restore its cultural leadership through promoting positive values ​​in society, investing in talented and creative people, spreading culture in various regions of the country and developing new cultural institutions.

Artists are worried, however, that some of the steps are in the opposite direction. Last year, Prime Minister Mustafa Madbouly issued a decree to reorganize funding and authorization for governmental and nongovernmental festivals, saying that “no ceremony or cultural festival may be held unless the organizer has obtained a license from the Ministry of Culture following coordination with the relevant authorities.”

Tourism expert and former head of the Egyptian Union of Tourism Chambers Hossam Akawy maintained that an arts city equipped with the latest technology would draw the attention of many people, including foreigners.

“Cultural tourism is among the top aspects that attracts tourists to Egypt. Many tourists who come to Egypt are excited about galleries, museums, theaters, cinema and music. What would add value to these places and attract many foreigners is the fact that they would be exposed to Egyptian and Arab culture and technology,” he told Al-Monitor.

He added that Egypt should invite international musicians, writers, artists and painters to have their work shown in the new cultural city as this would “definitely attract their fans to come and visit the city.”

Economists believe the Egyptian economy would also largely benefit from such an arts city. Ahmed el-Shami, an economist and a professor of feasibility studies at Ain Shams University, said that building a city of arts and culture could be an important trump card for the national economy — if well managed.

“For example, the US film industry, led by Hollywood, supports the US economy with $504 billion every year. If the Egyptian government could also make this new city attractive to the film sector, it would be a lucrative business,” he said.