The Bab al-Salama border crossing in Aleppo’s countryside opened for Syrian refugees coming from Turkey to spend Eid al-Fitr at home with their families. 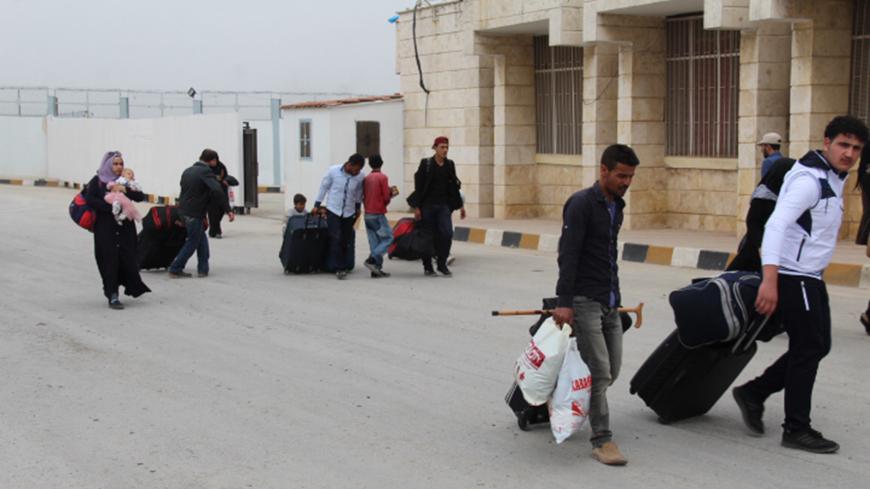 Syrians who live in Turkey cross the border at Bab al-Salama to spend Eid al-Fitr with their families in Syria, May 24, 2019. - Khaled al-Khateb

ALEPPO, Syria — Syrian refugees living in Turkey have been arriving at the Bab al-Salama border crossing, north of the town of Azaz in the northern countryside of Aleppo, to enter Syria and spend Eid al-Fitr, marking the end of the holy month of Ramadan, with their families. The crossing’s administration is allowing Syrians to enter between 9 a.m. and 4 p.m. on May 18-31.

Since May 18, hundreds of Syrians have entered through the crossing every day, reaching a total of just over 8,300 Syrians currently. The crossing’s administration reported that on May 25 alone, 1,407 Syrians entered Syria. Ever since the crossing started to receive Syrian refugees from Turkey, many pre-booked their entry for the Eid holiday on the crossing’s website.

Al-Monitor visited Bab al-Salama crossing on May 24. Buses have been transporting families from the Turkish side of the crossing to the Syrian side around the clock. The buses stop in front of the administration building where the travel permits are stamped, and then people get back onto the buses to reach the station, 2 kilometers (1.2 miles) inside Syrian territory. Travelers seem pleased with the quick process and the buses that provide transportation.

Brig. Qassem al-Qasim, director of Bab al-Salama crossing, told Al-Monitor, “We expect over 25,000 people to enter Syria for Eid al-Fitr by May 31. On May 16, we announced a set of instructions and conditions that must be met in order for Syrians to enter. Among the conditions, only refugees who have received the Temporary Protection Card can spend the holidays in Syria, while Syrians who hold Turkish residency or citizenship, or a work permit from Turkey, cannot enter Syria.”

The Temporary Protection Card is granted to Syrian refugees by the Immigration Department of the Turkish Ministry of Interior. It gives the refugees the right to reside in Turkey in a formal way. Not all Syrians residing in Turkish territory carry this card; some of them hold a work permit, others obtained Turkish citizenship. However, most Syrians in Turkey have this card.

There are about 3.6 million Syrian refugees in Turkey, according to data from the Turkish Interior Ministry in March, but there are no official Turkish statistics on the number of refugees who hold the Temporary Protection Card.

“The Syrian refugees who entered Syria have to return to Turkey between June 10 and Nov. 1,” Qasim said, adding that people who miss the Nov. 1 deadline will have to remain in Syria.

Mohammad Ismail and Ibrahim Ismail, two brothers from Raqqa who took refuge in Turkey about five years ago, were waiting at the crossing. Mohammad told Al-Monitor, “I miss my mother so much; I have not seen her since 2014. I am very happy that I managed to get the permit and spend the last days of Ramadan and celebrate Eid al-Fitr with her. You cannot imagine how happy I am to spend time with my mother and eat her food again.”

The Ismail brothers still have to head to Aoun al-Daddat crossing, which separates the areas controlled by the Free Syrian Army in Aleppo countryside from those controlled by the Syrian Democratic Forces (SDF) in Manbij. From there they can reach SDF-held Raqqa.

Saber Najjar, a Syrian refugee who lives in the Turkish city of Adana, came with his wife and three children to spend Eid al-Fitr with their relatives in al-Bab in Aleppo’s countryside. “The Eid holiday takes our mind off the hard life we live as refugees in Turkey. Seeing our family and friends is priceless and I hope my family and I will have a great vacation since I have not been back home for about four years now,” Najjar told Al-Monitor.

An Aleppean woman in her 50s, who was accompanied by four young women, told Al-Monitor on condition of anonymity, “We are from al-Shaar neighborhood in Aleppo city. We came to Turkey in 2015 and we have not seen our home since. We have no idea what happened to it exactly; we are not sure if it still stands or was destroyed in the war.”

She added, “These are my four daughters and some of our family members are still in Turkey. My husband and our two sons stayed in the Turkish city of Mersin; they cannot spend the Eid holiday with us in Aleppo because we are afraid that the regime security forces would arrest them. We will see what the security situation is like in Aleppo and if it is safe and our home is still there, we will stay here and not go back to Turkey. The rest of our family can follow next Eid. But if the situation is not good enough and we no longer have a home, we will have to return to Turkey.”

Many Syrian men stay behind in Turkey, either for work obligations or for security reasons if they are from areas controlled by the regime or the SDF, fearing arrest or forced recruitment. Crossing the border into Syria is safer for women as many do not work and fewer security measures are taken against them.

Souad Hassan, a mother of two from the city of Azaz, told Al-Monitor, “My husband stayed in Gaziantep. He cannot spend Eid with us because he works in a clothing shop. My children and I will spend the holidays with my family in Azaz, whom I have not seen since last Eid.”