While the United States is pushing for an economic workshop to help Palestinians, the mood in Ramallah is defiant with ideas to build an alternative independent economy — a goal sought by the Shtayyeh government. 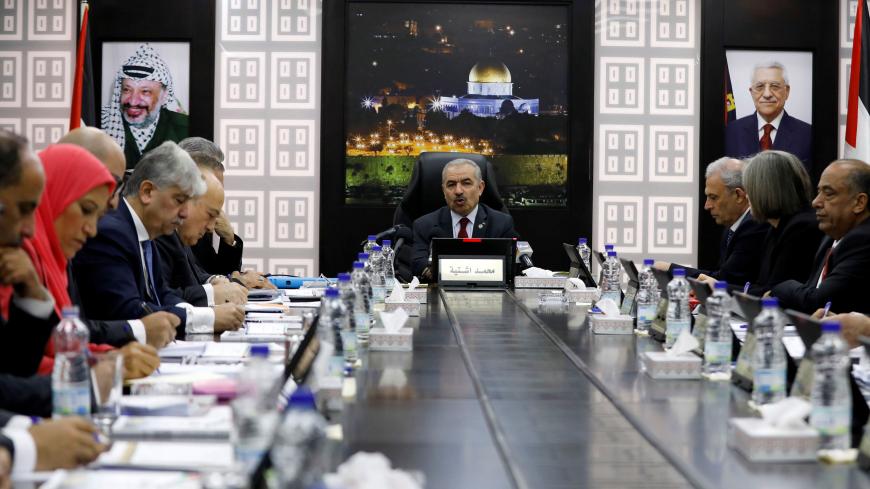 Newly appointed Palestinian Prime Minister Mohammad Shtayyeh didn’t mince words about the situation facing Palestinians. Walking to his first Cabinet meeting since his appointment, the Fatah Central Committee leader told his government that it has to make major cuts. No more business class flights, no new purchases of cars — and they must agree on an austere Palestinian budget as soon as possible. This austerity mode is in sharp contrast with the Donald Trump administration’s attempts to flood Palestinians with investment money through the economic workshop due in Bahrain in June.

The main reasons behind economic problems facing the Palestinian government are all man-made. The United States drastically cut its aid package for the West Bank infrastructure programs (it had earlier stopped any direct support to the government), and the Palestinians had refused to accept the $60 million earmarked for the Palestinian security because of a new US law that would make it acceptable for any US aid recipient to be sued in American courts.

While the Trump administration’s effort to squeeze Palestinians financially was starting to be felt throughout Palestine, what the Israelis did in restricting the transfer of Palestinian money made things much more difficult.

As part of the 1994 Paris Economic Protocol, and in response to Palestinian plans to run the public sector, Israel agreed to collect customs and taxes for products earmarked for the Palestinian territories in return for a 3% service charge that has been in effect since the establishment of the Palestinian Authority (PA) in 1994.

But the Benjamin Netanyahu government — struggling to ensure victory in the April elections — had decided in February to unilaterally deduct an amount from Palestinian money equal to what the Palestinian government pays families of prisoners and martyrs, even though these payments have been paid with Israel’s full knowledge since the formation of the PA.

Calling the Israeli decision “theft,” Palestinians refused to accept any of its own money unless it was paid in full as agreed to in the Paris Protocol. Attempts to ask French President Emmanuel Macron and other Europeans to intervene with Israel made little difference because the Israeli decision had become law and couldn’t be reversed — even as many in the Israeli government (and especially the security apparatus) felt it might have gone too far.

Samir Hulileh, a Palestinian businessman with close ties to the Palestinian leadership, told Al-Monitor that the "crux of the economic problems is not new and is based on a consistent Israeli policy aimed at stunting economic growth based on security and political excuses."

Hulileh said that despite efforts by former British Prime Minister Tony Blair, the Quartet on the Middle East and former US Secretary of State James Baker to help kick-start the Palestinian economy, “The economy failed due to Israel’s refusal to cooperate in terms of what Palestinians could do in Area C (which covers 60% of the West Bank) and the crippling security restrictions.”

Hulileh — former CEO of PADICO, which is the biggest company in Palestine — said that Israel’s “refusal to allow Palestinians to extract gas offshore and oil in the West Bank, as well as its denial to allow telecommunications equipment to enter Palestinian areas, are just a few of the many examples of the negative effects of Israeli policy on our economy.”

Bringing Palestinians to their knees economically was not a coincidence, as the Trump administration revealed May 19 a plan to organize a workshop with Bahrain, aimed at supporting Palestinians economically. Naturally, Palestinians shouted foul as they felt that the Americans bypassed them and didn’t consult with them. If Washington is so keen on preserving the Palestinian economy, they argued, why is it so busy, along with Israel, in destroying it.

Shtayyeh told the Cabinet May 20 that the Palestinian leadership is not looking for ways to improve life under occupation. “We were not consulted about this workshop, and the financial crisis is the result of a financial war that aims to politically blackmail us. Our national rights are not negotiable,” he said.

Ori Nir, spokesman of Americans for Peace Now, told Al-Monitor that the Trump administration’s approach brings the conflict back to the 1970s and 1980s. “Back then, the Israeli governments followed an oxymoronic policy of ‘benign occupation,’ applying economic band-aids to numb Palestinian nationalism. The tragic difference is that while Israeli leaders knew full well that conflict resolution will have to accommodate the Palestinians’ yearning for national liberation and statehood, Trump’s team seems adamant on ending the conflict without liberating both Palestinians and Israelis from the disaster that the occupation is,” said Nir, who covered the first Palestinian intifada for Haaretz.

Hanan Ashrawi, an elected member of the Palestinian Legislative Council and a PLO executive committee member, argued in a post on her Twitter account that the Bahrain workshop is an attempt to “sidestep” the political and legal imperatives of a just peace. “We are perfectly capable of building a vibrant economy once we control our land, resources, borders and lives. Integrating Israel in the Arab world while maintaining its brutal occupation of Palestine is delusional.”

Hulileh noted that if the United States wanted to help the Palestinian economy, “[It] can work on releasing our money instead of seeking financial support from Arab and international donors.”

Head of the Bethlehem Chamber of Commerce and Industry Samir Hazboun told Arab News May 21 that none of the businessmen he knows were invited or are planning to attend the US-sponsored workshop. He said he and his team had been working with the Palestinian government on a 100-day plan that would include “practical ways to speed up economic separation from Israel and become more economically dependent on our own.”

Bashar al-Masri, a Palestinian real estate businessman, said May 21 he has been invited but will not attend.

Mubarak Awad, founder and director of the Nonviolence International Center in Washington and one of the proponents of nonviolence in Palestine prior to the first intifada, told Al-Monitor there is a need for drastic economic policies to totally separate from Israel. “We need to stop using the Israeli currency, stop eating and drinking Israeli-made products, and take strong steps to totally separate from Israel, which will be costly in the short term but is necessary for the long term.”

The Shtayyeh government’s weekly press release May 20 spoke about Cabinet decisions to improve economic relations with Jordan and slowly cut off ties to Israel. A senior Palestinian source told Al-Monitor on condition of anonymity that these proposals, as well as ending all medical referrals to Israeli hospitals, were a compromise. “Certainly, improving relations with Jordan is needed, improving local production is necessary, but Shtayyeh’s policy avoids bigger issues such as boycotting Israeli products or asking workers not to work in Israel,” the source said.

While Palestinians are going to be absent from a conference that will be talking about the Palestinian economy, a well-respected international expert on the Middle East thinks Palestinians should not totally dismiss the idea of giving the economic path precedence on the political track.

Nadim Shehadi, director of the Lebanese American University New York Headquarters and Academic Center, told Al-Monitor the economic track is not necessarily inferior to the political track. “Sovereignty is overrated, and there is no such thing as absolute sovereignty today. Palestinians should be present in any forum and shouldn’t boycott it so as not to be a hostage to a particular political point of view. The economic and political tracks are independent of each other, and attending an economic conference will not dilute Palestinian political demands,” Shehadi said via phone from New York.