Is the Palestinian social fabric at risk of tearing?

A recent local incident on the West Bank required the attention of the national leadership to tamp it down, leading some to wonder it if portends trouble ahead for the Palestinian social fabric, which has to this point been distinguished by its unity. 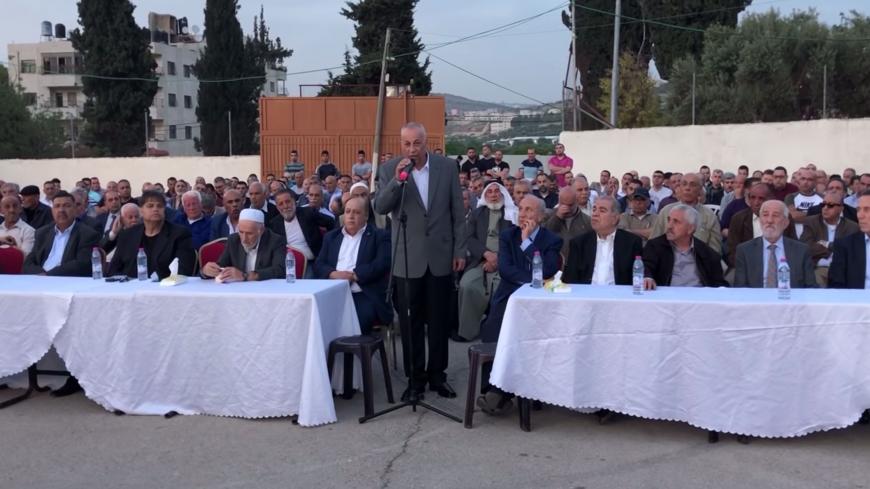 Amid economic pressures and political uncertainty in Palestine, a small personal altercation became a much larger episode requiring high-level political intervention to keep the local incident from turning into a national conflict. Such events are especially troubling in cases that expose religious differences and leave minority communities feeling vulnerable, as recently happened in Jifna, a predominantly Christian village of some 3,000 people north of Ramallah.

Hanan Rafidi, driving with her children in Ramallah on April 24, found herself in a traffic altercation and roadside incident involving a young man, Ayham Rizeq, who allegedly pushed Rafidi and verbally insulted her. Rafidi filed a complaint at the local police station that resulted in Rizeq's arrest at his home.

Efforts to convince Rafidi to drop the charges failed, so Rizeq remained in police custody. Rizeq’s father, Khalil Rizeq, heads the Palestinian Chambers of Commerce, which has strong ties to the dominant Fatah movement.

With Ayham detained, members of the Rizeq family rounded up friends from the nearby Amari refugee camp, many of whom were armed, and on April 26 traveled to Jifna, where Rafidi lives, and wrecked havoc. They destroyed property, shot weapons in the air and cursed at the people of the village, sometimes hurling religious and sectarian insults.

Jifna residents made emergency calls to the police, but it would be three hours before anyone would arrive. Part of the delay, it turned out, was because Jifna lies in Area B of the West Bank — administered by the Palestinians but with joint Israeli-Palestinian security control — the police needed approval from Israeli authorities before entering it. The village council met and issued a strongly worded letter to Palestinian Prime Minister Mohammad Shtayyeh, who is also serving as acting interior minister.

Shtayyeh and Lila Ghannam, governor of Ramallah and al-Bireh, moved expeditiously, ordering security forces to round up the individuals who had disturbed the peace and done damage to Jifna. Following the intervention by the Palestinian leadership, family members and other relatives of those involved in the assaults in the village requested a “sulha itraf” (admission of guilt reconciliation).

A reconciliation agreement was signed on April 29 at a public event held in the courtyard of the Jifna Orthodox Church, with more than 300 people in attendance, including friends of the Rizeq family and public figures. A video of the event showed prominent Palestinian political and religious leaders publicly addressing the mayor and people of Jifna, asking their forgiveness for community members' actions against the people of Jifna. They gave the head of the village council funds to help cover the cost of the physical damage.

Jifna Mayor Amjad Awwad, speaking by phone to Al-Monitor, declined to disclose the amount provided, but said that it would “more than cover the cost of repairs.” Awwad further remarked that the people of Jifna were satisfied with how the incident had been dealt with and now considered the case closed. “We accepted the apology, and the people of Jifna feel that their rights have been restored,” Awwad said.

One of the best things arising from the incident, Awwad said, is that Shtayyeh, in his capacity as interior minister, bypassed the requirement of coordinating with Israel. “From now on, when we call the Palestinian police asking for help, they will come immediately and will no longer need to wait for coordination or approval from the Israelis,” he said. Shtayyeh's decision is a clear challenge to the Oslo Accords, which Palestinians feel Israel has repeatedly violated.

Father Abdullah Ylious, from the Melkite Roman Catholic Church in Ramallah, took part in the reconciliation event in Jifna.

“The Bible teaches us that blessed are the peacemakers,” Ylious told Al-Monitor. “In this case, it is important to resolve a problem when you are dealing with a sinister plot aimed at causing divisions between Muslims and Christians. I thank the people of Jifna for accepting our apology. After years of struggle together, we should never be talking about Muslims and Christians. People in Lebanon were always referring to Palestinians as a unique example of inter-religious comradeship. We need to be united now more than at any other time, as the conspiracies against Palestinians are increasing.”

George Abdo, secretary of the Orthodox Church in Jifna, also spoke at the reconciliation, referring to the Palestinian experience as a mosaic.

“This is a happy event that shows that we live in a community that is proud to be peacemakers,” he had said. “This is a mosaic that reflects a civilized way of solving problems. We live on this holy land as one big family, and what happened today is a reflection of our people’s commitment to our shared life, values and national aspirations.”

The incident in Jifna was resolved peacefully, but it is not clear whether what happened represents a precursor of social tensions to come in Palestine or is just a one-off. With the US plan for an Israeli-Palestinian peace soon to be announced, and the economic situation deteriorating due to the US and Israeli actions, it is more important than ever for Palestinians to be vigilant and not allow local incidents to create broader internal tensions and conflicts.