Can Golan Heights' vultures be saved?

Faced with poisoning by cattle breeders, the vultures of the Golan Heights are practically extinct, with only five still alive. 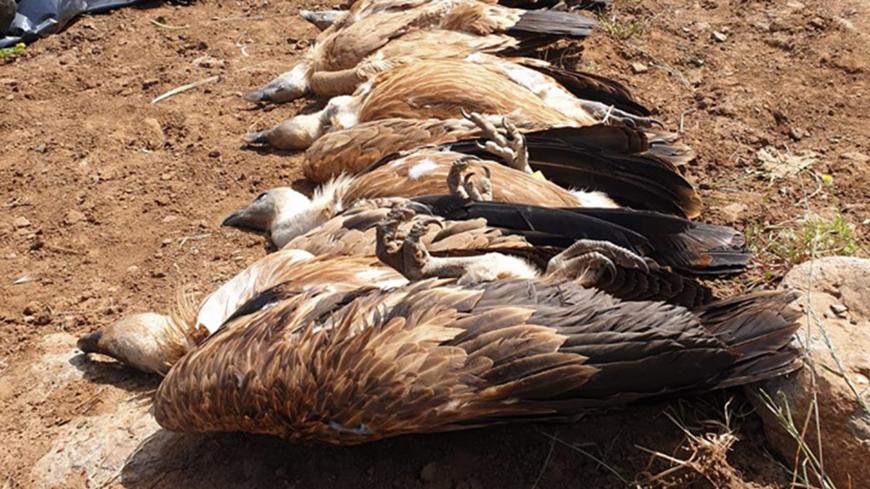 Poisoned vultures lie side by side in the Golan Heights. - Israel Nature and Parks Authority / Dudu Pils.

A picture on social media May 10 showed eight vulture carcasses lying side by side, all of them victims of poisoning. The snapshot sums up the tragedy of the griffon vulture population in the Golan Heights, which until a decade ago numbered about 130. Today, there are no more than five of them left. On May 12, the police reportedly arrested a 30-year-old man who is suspected of poisoning the vultures.

The Eurasian vulture, also called the biblical vulture, weighs no more than eight kilos (about 18 pounds) and has a wingspan of up to 2.80 meters (9 feet). This vulture feeds on carcasses and is prevalent in Mediterranean basin countries. For many years, numerous vultures nested in the Gamla Stream cliffs of the Golan Heights and were a tourist attraction. Tens of thousands of visitors flocked to the nature reserve to observe the vulture colony that nested in the cliffs above the stream. However, over the years the vultures have fallen victim to systematic poisoning attempts. The worst instance of poisoning took place in 1998 when about 40 vultures were found dead after eating the carcasses of poisoned cattle or wild animals.

“Cattle breeders and farmers illegally scatter poison for various reasons,” Ohad Hatzofe, an avian ecologist with the Israel Nature and Parks Authority (INPA), told Al-Monitor. “Sometimes it’s because they want to eliminate predators —  wolves, jackals and foxes — that threaten their flocks; sometimes it’s due to a dispute over grazing land. Most of the farmers are law-abiding citizens, but all you need is one person to place poison to harm the vultures. The reason that vultures are so vulnerable is because they live in flocks. Dozens of them surround a carcass to eat it, and if the carcass is poisoned, then all of them will be poisoned.”

Hatzofe is frustrated and angry, especially with regard to the current poisoning. “We had equipped three of the poisoned vultures with GPS transmitters and they had tags and rings. We saw that they had stopped moving and that their body temperature fell; we understood immediately that a tragedy had taken place,” he said. “My greatest frustration is that I know it will happen again. There is no punishment, no control. The bullets of an entire gun cartridge are nothing compared to the potential of damage caused by poisoning. These criminals scatter substances in quantities that can poison dozens of human beings [as well].”

INPA wants to use the current public outrage over the recent vulture poisoning to introduce legislation that will enable them to protect wild birds. It would be an amendment to Israel's Wildlife Protection Law in which the burden of proof would be shifted to any person found with a poisoned carcass in their possession on his land. Today, the burden of proof is on the state. With the new amendments, inspectors would be authorized to enter the private areas without a court order if they suspect poisoning. Another vital aspect that requires legislation — or at least regulation — is ramping up the supervision over the selling of pesticides.

However, there are those who strongly object to increased regulation in this sphere. One notable example is Omri Sharon, one of the sons of deceased former Prime Minister Ariel Sharon and chairman of the Israeli Cattle Breeders Association (ICBA). Sharon himself breeds cattle, sheep and goats, and he grows agricultural products.

"What needs to be addressed is poison that is used illegally,” Sharon told Al-Monitor, rejecting automatic accusations against cattle breeders. “We cattle breeders don’t even use that poison. Clear directives already exist in the law and these existing orders must be enforced. We oppose any tightening of regulation and punishment. There are 8,000 farmers in the country. The idea that someone will be allowed to freely conduct searches of farmers' storerooms is crazy. It is populistic, and it’s not the solution to the problem. We already suffer from overregulation and it’s not easy being a cattle breeder in Israel.”

Al-Monitor spoke to professor Yossi Leshem, a world-renowned Israeli ornithologist and senior researcher at Tel Aviv University’s Zoology Department. He is also active in INPA. Leshem is furious at the lack of regulation and directs his anger at ICBA. “The situation today is a bad joke,” he said. “The cattle breeders do whatever they want because they know that there is no enforcement in Israel. So they receive a fine of 5,000 Israeli shekels [$1,400] — big deal. That doesn’t deter a farmer who wants to kill the wolves that devoured his calves. In Spain, people are sent to prison for poisoning vultures, but not here. There was a big poisoning incident [in Israel] in 1998 in which dozens of vultures died and the police caught the perpetrator. He wasn’t even slapped with a fine. If he would have spent a year in prison and paid a fine of a million shekels, the [current] tragedy would never have taken place.”

Leshem is not deterred by public battles. In the past, he founded the “Under Our Wings” initiative for the protection of vultures and other birds of prey together with the Israel Electric Corporation and INPA. He now aims to lead a widespread public campaign.

“The situation today is a catastrophe. Before the establishment of the state, there were a thousand pairs of vultures in Israel; today only 40 pairs remain," he said. "In Gamla, there had been 60 pairs; today, none are left. We have already recruited several public personalities to join us, including former Attorney General Yehuda Weinstein; former High Court Justice Elyakim Rubinstein; former head of the Police Investigations Branch Lahav 433 Meni Yitzhaki; Maj. Gen. (Res.) Noam Tibon — and others. We will work together to change the law. We in INPA want to lead a public campaign under the title, “Returning the Vultures to the Land of the Bible” — the vulture is mentioned 27 times in biblical Jewish sources and is part of the story of Israel. It just doesn’t make sense to abandon it to poisoning attempts.”

Another threat to birds of prey that greatly troubles the organizations involved is the current establishment of electricity-producing wind turbine farms in the Golan Heights. The blades of the turbines harm birds and may kill the vultures and other large birds of prey. Due to the opposition of environmental activists, the decision was made to operate a system of observation posts and radar devices that will pinpoint birds nearing the turbine site and the engine will slow down to avoid harm to the birds.

Leshem is skeptical of the plan. “All this is simply bullshit. It won’t work. In Spain, a thousand vultures a year are slaughtered by these blades. Two types of vultures that had been common in Israel were wiped out three decades ago. The threat to Israel’s birds of prey necessitate deep changes in our thinking. So long as that doesn’t happen, no one should be surprised when the birds of prey population in Israel becomes history,” he concluded.