Vultures have existed in the Holy Land since biblical times, and Israel is investing considerable resources to save the local population from extinction due to urban development, hunting and poisoning. 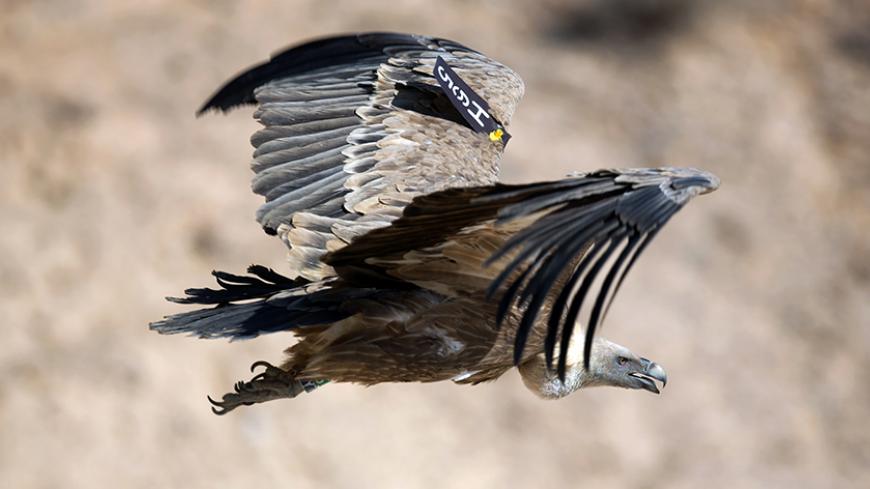 Since mid-March, at least 12 vultures have been poisoned in Israel in at least three separate instances. Ten of the birds died. One indirect victim of these poisonings is a chick of the genus Gyps fulvus (the griffon vulture), the type of vulture that appears in the Bible. The chick is less than three weeks old, but it is gradually coming to regard an older female vulture named Shoshana as a mother figure. There is no physical contact between the birds. All their communications are vocal and visual. He can see Shoshana outside his special cage, known as the Nursery, where he is fed by a tube with a vulture’s beak at the end to make him feel that it is actually his mother feeding him. In addition, the Nursery is heated to make the chick feel that it is still in its nest.

At the Carmel Hai-Bar Nature Reserve in northern Israel, animal populations in danger of extinction are rehabilitated, bred and reintroduced into the wild. The vulture chick has never seen the staff of the Nature and Parks Authority working at the reserve although they have been caring for it since it hatched. The bird was rescued from a nest on the Gamla cliff in the Golan Heights, where it had been abandoned after its parents ate a poisoned carcass. Their suspicions raised, game wardens working for the Nature and Parks Authority soon found five dead griffon vultures and two dead cinereous vultures, which are also at high risk of extinction. They, too, had died from poisoning.

Yigal Miller, who is responsible for the breeding and release of birds of prey into nature throughout Israel, said, “We went into poisoning mode and checked the nests. An older vulture can go without food for two weeks, but a chick needs to eat every day, so we have to see if the parents are sharing the watch. If one of the birds is injured, the other bird cannot leave the nest. It will stay there until it finally gives up and goes to find food itself. Our observations showed that the birds were not, in fact, taking turns at the nest and that one egg had been abandoned.”

A rescue company rappelled down to the nest to extract the egg. It was then placed in a special incubator and transferred to the Carmel Hai-Bar reserve, where it was X-rayed and weighed. “We detected a major abnormality in the egg, but with the help of an electronic hatchery (which includes on-camera supervision 24/7), we were able to perform a kind of ‘pregnancy watch’ on the egg to ensure that it didn’t hatch prematurely. In nature, it would not have hatched at all,” said Miller. 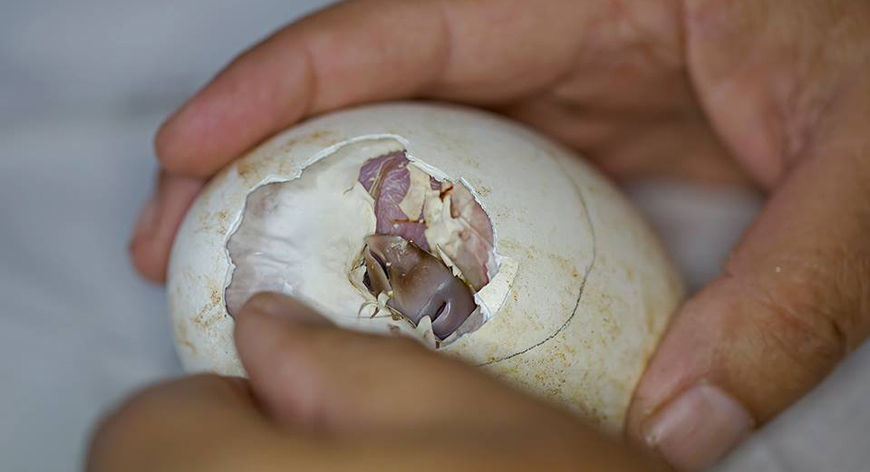 The beak of a vulture chick emerges through the cracks of its egg, during hatching. (Photo: Adi Ashkenazi, Israel Nature and Parks Authority)

A chick hatched from the egg about two weeks later. The orphaned chick grows and develops in a nursery-like cage for about 80 days. It will then be transferred to a flight cage positioned on the cliff of Mount Carmel so that it can learn to deal with winds and other conditions and become more familiar with the terrain. It will be released into the wild sometime between the ages of one and a half and two, joining the 42 other vultures circling the cliff. The “kettle,” a group of vultures, was established on the nature reserve in 1999 under the supervision of a dedicated team of caregivers.

The tremendous effort by the Nature and Parks Authority — together with the Society for the Protection of Nature in Israel and the national electric company, which is concerned with preventing birds from being electrocuted by high voltage wires — can also lead to frustration. “We can restore and raise an entire kettle, but then it flies over Syria, Lebanon or Sudan, and someone takes them out with a rifle. Hunting is almost completely uncontrolled in the Middle East,” said Eldad Eitan, director of the Gamla Nature Reserve in the Golan Heights.

To get a handle on the problem, game wardens in Israel receive information about what happens in Lebanon from French nature preservation authorities, who receive reports directly from Lebanon. They also keep close track of information from transmitters attached to some of the birds. Although it is difficult to speak of genuine cooperation, teams from Turkey are in contact with nature preservation authorities in Israel as well.

About 150 years ago, Henry Baker Tristram, a British clergyman with a ken for ornithology, documented thousands of vultures in the Holy Land. Over time, their natural nesting grounds contracted as a result of the development of new settlements and roads, and the population almost became extinct. “A survey taken in 2000 counted 400 vultures,” said Ohad Hatzofe, an ornithological ecologist working for the Nature and Parks Authority. In 2007, there was a mass poisoning from carcasses carrying pesticides in Gamla, one of only three nesting areas in the country, and just 20 birds survived. Today, Hotzofe noted, there are only 150 birds still living in the wild.

As the sources of food for the vultures’ diet decreases, the impact that man-made poisons have on them increases. For example, they might be attracted to poisoned bates or eat carcasses of animals fed antibiotics. “If there were as many as 5,000 gazelles in the Golan Heights some 50 to 60 years ago, today there are about 500. When there are lots of gazelles, mortality [among them] is high, and there is plenty of food for the vultures to eat. The same is true [for the numbers of] boar, fallow deer, wild goats and other animals that have vanished from the landscape,” Eitan said.

As if that were not enough, there are also cases of classic poisoning to deal with. In an attempt to ward off such predators as wild dogs and wolves, cattle growers set traps containing poisoned cow flesh. The impact this has on vultures is immediate. Although the use of such poisons is illegal, it is difficult to identify the people who set it out and to prove that they did so.

To revive the vulture population in Gamla after the lethal poisoning in 2007, the Nature and Parks Authority stepped in. “It was decided to extract every egg that was found and to raise them in incubators, where the hatch rate is significantly higher. That also causes the females to lay a second egg. There was a lot of opposition to the entire process, with people saying that it was invasive. In fact, I was also against it. But then these steps, which were considered very innovative worldwide, really proved themselves effective,” Eitan admitted. He says that the number of vultures in Gamla has doubled in just eight years.

The State of Israel invests considerable resources in protecting all native species in danger of extinction, but especially the vulture. According to people working on the issue, the vulture is nature’s sanitation department. It prevents the outbreak of disease, and in doing so, protects people as well.

“The vulture is a very important animal on the food chain,” Miller said. “The fewer vultures there are, the more animal carcasses we have. That is detrimental to agriculture, because the carcasses attract more predators, including wolves, and this increases the risk of rabies.”

“Vultures have been here since biblical times,” Eitan said. “I want my children to have the privilege of seeing a vulture. I don’t want to face a child at some point in the future, when all that he knows about vultures comes from pictures and stories. I don’t want that child asking me if I did everything I could to protect the vulture from going extinct.”