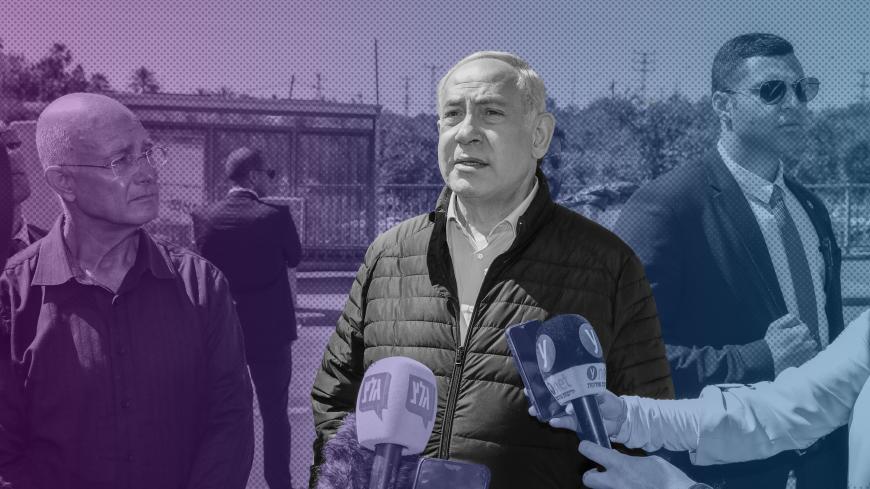 Israeli Prime Minister Benjamin Netanyahu speaks as he visits the site of a Palestinian attack that took place a day earlier, at a junction leading to the Jewish settlement of Ariel in the Israeli-occupied West Bank, March 18, 2019. - Jack Guez/REUTERS

Although Prime Minister Benjamin Netanyahu has not even completed the process of assembling his new government, he and his partners are already preparing for a dramatic change in the legal system. The all-out war against the Supreme Court that began in Netanyahu’s previous term and was led by Justice Minister Ayelet Shaked continues. This war of words may well slide into popular revolt. And while the opposition parties are organizing a large demonstration bearing the name of “Defensive Shield for Democracy,” the prime minister and his ministers have opened a front against former senior defense officials.

The right-wing war against the Supreme Court was designed to pave the way for an override clause and Netanyahu's immunity legislation. Similarly, the right's verbal assaults on former senior security officials are designed to lead to annexation of the West Bank by the new government that is expected to take shape in the coming week.

The Commanders for Israel's Security (CIS) movement has been very active the past few months warning the Israeli public against the talk of annexation. The movement, founded in October 2014 as a spontaneous initiative by a number of high-ranking officers in the reserves, first called on Netanyahu to adopt the 2002 Arab Peace Initiative as a basis for diplomatic-security negotiations and jump-start the diplomatic process with the Palestinians. This, of course, never took place but later, when the two-state solution crashed, the movement's goals changed. Hundreds of former high-ranking officers joined the group from all sectors of the security system: the Israel Defense Forces, the Mossad, the Shin Bet and the police.

Last December, when the annexation plot was thickening, the CIS movement ran billboards with the slogan, “The time has come for a divorce from the Palestinians.” Based on their research, CIS members warned that if Israel decides to pursue annexation — even only involving the West Bank's Area C — it would lead to “cessation of security cooperation with the Palestinian Authority and, most probably, to [the PA’s] demise and an outbreak of violence on the territory [that would necessitate] the re-conquering of Areas A and B including the 2.6 million Palestinians living there. This would not be from choice but from security constraints.”

Did this campaign succeed in frightening Israelis? It was made clear on April 9, when the Knesset elections were held, that it did not. In light of the clear victory for the right, annexation is now gathering momentum. The coalition demands made by the United Right of Netanyahu started with constraining the Supreme Court (a demand that also serves Netanyahu’s interests in avoiding a trial) and ends with a commitment to annex West Bank territories and cancel the 2005 disengagement. These two steps work together because if the Supreme Court should disqualify any future annexation bill, the Knesset could immediately write another law.

Recall that in his election campaign, Netanyahu claimed in a marathon of press interviews that he would work toward a graduated imposition of Israeli sovereignty in the West Bank. For example, in an April 7 interview on the "Meet the Press" program of Israel’s Channel 12, Netanyahu said, “I am going to impose [Israeli] sovereignty, but I will not distinguish between settlement blocs and isolated settlements. … From my perspective, we are responsible for even one lone Israeli settlement as the Israeli government. … I will not uproot anyone, and I will not transfer sovereignty to the Palestinians. … I will not transfer the very heart of the State of Israel."

The elections are now over, and it seems likely that the annexation idea will find its way into the coalition agreements of the next government. Proactively, the CIS hastened to send a warning letter to Netanyahu, writing, "Just as we promised to stand by you as you take steps to separate from the Palestinians while continuing to control the security [situation] until an agreement is reached, so too we pledge to stand with you, shoulder to shoulder, against advocates of annexation whose ideological fervor shadows the clarity of their view of the severity of the consequences. … Each of us shares the view that the application of the law in Judea and Samaria — in whole or in part — outside the framework of an agreement will trigger a chain reaction that will seriously damage Israel’s economy, its regional and international standing, but mainly the state’s security."

Nothing seems to irritate Netanyahu more than when security figures, especially former ones, try to teach him about security. Netanyahu did not reply to the letter, but stung the CIS in a tweet: “[They are] those same ‘experts’ who supported a nuclear agreement with Iran and warned that ‘Netanyahu is making a wrong turn and is destroying our alliance with the US.’ Land in [the West Bank] is not only a guarantee of Israel’s security — it is also the heritage of our forefathers.”

This tweet shows that Netanyahu has no intention of retreating from his promise to right-wing voters and that he's leaning on two arguments in favor of annexation: The territories guarantee security and also constitute the legacy of our forefathers that no one can deny. There is, of course, a third purpose that remains unspoken: Netanyahu must capitulate to pro-settler United Right senior Bezalel Smotrich and his friends to ensure the existence of his next government.

After Netanyahu came the turn of two ministers who criticized the former commanders. Culture Minister Miri Regev tweeted, “Former security officials, what does this code name mean, exactly?” Minister of Public Security Gilad Erdan went further and argued that “former high-placed officials” is code for leftists. “The time has come to stop using your ranks when trying to promote your political agenda,” wrote Erdan. “Just say it clearly: ‘We leftists oppose a presence in Judaea and Samaria.’ Because that’s the truth. Enough of this masquerade.’”

This is how the right operates: It presents former high-ranking security officials as crazy left-wingers and enemies of the state. Thus by delegitimizing them and the two-state solution, the path is paved to make Israel a binational state.

Brig. Gen. (ret.) Ilan Paz is a former head of the IDF Civil Administration who served in combat positions during his military service. Paz was horrified at the intensity of the scorn and derision from Netanyahu and his ministers. “What hatred, what contempt. Three hundred former IDF officers, the highest ranking of them all, generals and up, invest their time in volunteer work. They offer their help and their experience. Only yesterday they carried the security of the state on their shoulders, and today they are enemies,” he wrote on Facebook. “This [attitude] is not coming from the riffraff, but from Netanyahu himself! It’s his son. It’s also Erdan. From the top, to the last of the Likud members. … We have a civil war here. The government and its ragtag band against the people.”

Any additional word would be superfluous.