Reports: Iran to adopt countermeasures as US revokes sanctions waivers

Iranian President Hassan Rouhani will reportedly announce countermeasures to the US exit from the JCPOA and its reimposition of sanctions. 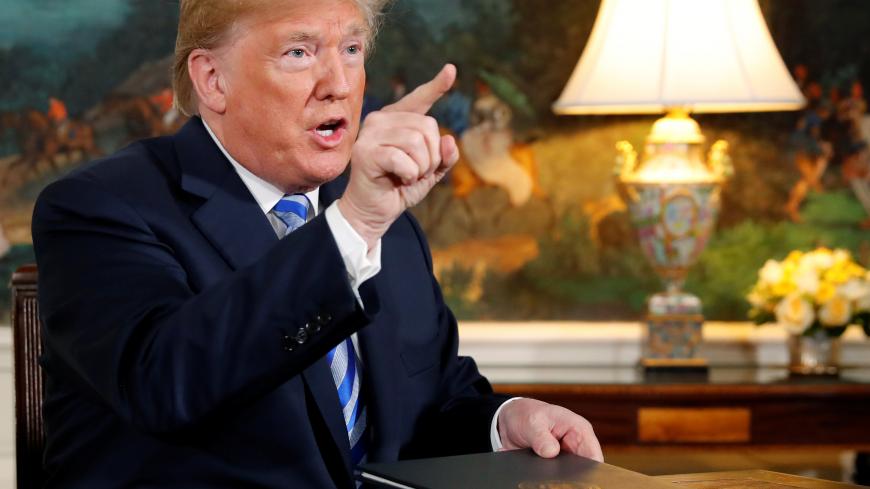 US President Donald Trump speaks to reporters after signing a proclamation declaring his intention to withdraw from the JCPOA Iran nuclear agreement in the Diplomatic Room at the White House in Washington, DC, May 8, 2018. - REUTERS/Jonathan Ernst

Iran will reportedly soon announce reciprocal measures in the face of the Donald Trump administration’s revoking of sanctions waivers allowing nuclear cooperation with Iran. European officials have unofficially been notified of the decision, according to media reports in Iran.

May 8, when Iran is reportedly set to make the announcement, will mark the one-year anniversary of the US officially exiting the Joint Comprehensive Plan of Action (JCPOA), which was an agreement between Iran, the five permanent members of the UN Security Council plus Germany, and the European Union in which Iran reduced its nuclear capabilities in exchange for sanctions relief.

Reports of Iran’s upcoming announcement come specifically in response to the US State Department’s decision on May 3 that it would revoke waivers for Iran that would allow it to ship its heavy water abroad for storage and swap its enriched uranium for natural uranium. The waivers were also reduced from 180 days to 90 days, in which the remaining parties are allowed to cooperate with Iran on the sites of Bushehr, Arak and Fordow without facing US sanctions. The new US announcement is an apparent effort to give time for remaining parties to the JCPOA, all who have criticized the United States for exiting the deal, to wind down work with Iran rather than cut them off all at once. It also appears designed to force Iran to halt heavy water production as well as uranium enrichment in order to adhere to limits on the latter under the JCPOA.

This comes a day after US national security adviser John Bolton released a statement that a US carrier battle group would be sent to the region "to send a clear and unmistakable message" that any attack on the United States or its allies would result in a US response. The statement said that any action even by a group Iran supports would be deemed as an Iranian action.

Iranian officials immediately rejected the new terms announced by the United States. Parliament speaker Ali Larijani, a former chief nuclear negotiator, said May 4, “According to the JCPOA, Iran can produce heavy water — and according to the agreement, it would not be in violation.” He added, “We will continue enrichment whether you want to purchase it or not,” referring to the arrangement in which Iran exports low-enriched uranium in exchange for natural uranium. The aim of the latter is to keep Iran’s stockpile of enriched uranium under the 300-kilogram limit set out in the nuclear accord.

President Hassan Rouhani will reportedly announce on May 8 that Iran will reduce its commitments rather than withdrawing from the JCPOA — at least for now. The president will cite specifically Articles 26 and 36 of the JCPOA.

Article 26 states that the European Union will “refrain from reintroducing or reimposing the sanctions that it has terminated implementing under this JCPOA.” It continues, “The US administration, acting consistent with the respective roles of the president and Congress, will refrain from imposing new nuclear-related sanctions. Iran has stated that it will treat such a reintroduction or reimposition of the sanctions … or such an imposition of new nuclear-related sanctions, as grounds to cease performing its commitments under this JCPOA in whole or in part.”

Article 36 of the JCPOA states, “If Iran believed that any or all of the E3/EU+3 were not meeting their commitments under this JCPOA, Iran could refer the issue to the Joint Commission for resolution.” The article continues that if the Joint Commission is unable to resolve the matter, then the “participant could treat the unresolved issue as grounds to cease performing its commitments under this JCPOA in whole or in part.”

Iranian media has speculated as to which commitments exactly would be reduced or which parts of the nuclear program would be restarted. In this vein, an article in Mashregh News noted that one of the scenarios could be a decision to begin using the new generation IR4 and IR2M centrifuges. Moreover, while Iran can store up to 130 tons of heavy water under the JCPOA, storing the surplus itself given the US revocation of Oman’s permission to do the latter could be one of the other actions Iran can take. Other possible steps discussed in Iranian media were beginning enrichment at 3.67% at Fordow or suspension of some aspects of the enhanced monitoring under the nuclear deal, such as its implementation of the Additional Protocol.