'Neither talks nor war,' Khamenei says of US-Iran tensions

Despite recent heightened tensions between Tehran and Washington, Iran's supreme leader said a war will not erupt between the two sides. 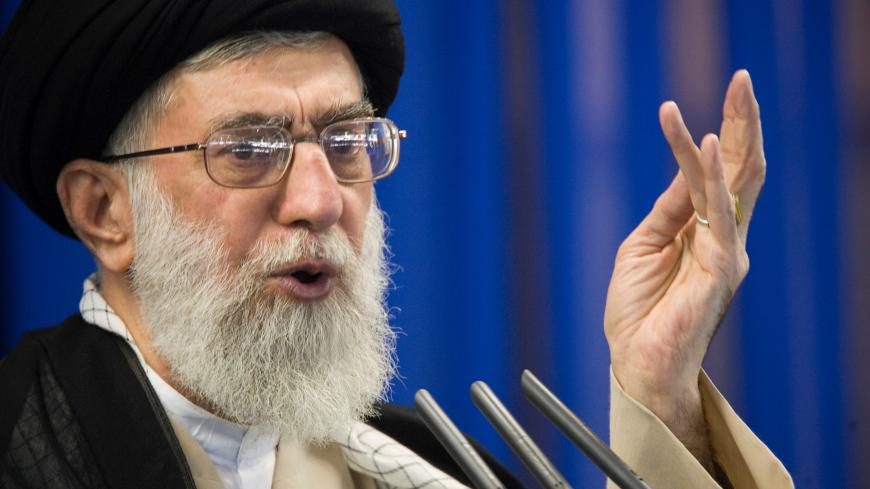 Ayatollah Ali Khamenei said Iran will force the United States to retreat by "resistance," which he described as the only option against unrelenting US pressure. During a meeting with the country's top political elites, including President Hassan Rouhani and parliamentary speaker Ali Larijani, Khamenei​ dismissed the possibility that the United States and Iran would go to war, stating that the Americans understand that any such conflict will not serve their interests.

Khamenei reasserted his earlier stance that dialogue with the current US government is not an option: "As long as the United States is what it is now … negotiating is but poison, and with this current administration that poison is twice [as lethal]."

Khamenei praised Iran's missile program, stressing that it remains nonnegotiable. He underlined Iran's "self-sufficiency drive," which he said is being pursued by the Islamic Revolutionary Guard Corps (IRGC).

On the economic front, however, Khamenei admitted that Iranians, particularly the poor and the middle class, were under strain. At the same time, he rejected the idea that the economy is in a state of deadlock. The Americans "are right, these sanctions are unprecedented," he said. "But the point is that the Islamic Republic is made up of a powerful metal."

Hard-liners took pride in Khamenei's statements, interpreting them as a sign of Iran's steadfastness. "It is the first time in the past 230 years that we are facing a superpower that has no courage for a military strike against Iran," wrote Abdollah Ganji, the editor-in-chief of Javan, which represents the views of the IRGC.

"The supreme leader clarified the line: They [Americans] seek to negotiate over our points of strength. Such a negotiation is poison," Ganji added.

But pessimism still prevailed among critics of the Islamic Republic, who argued that the continuous confrontation will not benefit Iranians. "There will be no war, nor any talks, but we will starve to death," one user wrote on Twitter, referring to Iran's economic hardship.

Khamenei's speech was his first public reaction to a recent military buildup by the United States in the Persian Gulf, which has triggered speculations that the two sides are inching closer to a full-blown war. Yet, despite US threats, the official line adopted by Iranian authorities, even those who advocate rapprochement, has been one of defiance.

"Increasing American military presence will push the region toward suicidal instability," tweeted Heshmatollah Falahatpisheh, a Reformist lawmaker who heads the Iranian parliament's National Security and Foreign Policy Commission. "Thousands of non-Iranian warriors will move against the US and its regional allies, people who have lost at least one of their family members to US-made weapons. The Persian Gulf is in dire need of de-escalation."

In yet another sign that it is not ready for compromise, Iran took a step forward in implementing a recently announced decision about "reducing its commitments" under the Joint Comprehensive Plan of Action. Tasnim, a conservative news agency, reported that the Atomic Energy Organization of Iran has now started putting into practice the measures, which were ratified by Iran's Supreme National Security Council.

Under the new arrangements, Iran will no longer comply with a cap on its stock of low enriched uranium, which previously would have to be exported once it exceeded the 300-kilogram limit on uranium hexafluoride. As for its stockpile of heavy water, Iran will no longer commit to shipping excess water for storage in Oman when it passes the 130-ton threshold. On May 3, the Donald Trump administration revoked the sanctions waivers that allowed Iran to export low enriched uranium in return for natural uranium, and also to store Iranian heavy water abroad.

Tasnim's report quoted an "informed source" as saying that, in the days to come, media representatives will be invited to cover the latest developments related to those measures at the Natanz and Arak facilities. Activities at the two sites were among the thorniest and most contentious issues during the nuclear talks between Iran and the world powers.