Intel: Why Turkey’s transfer of Muslim bloc leadership to Saudis was so uncomfortable 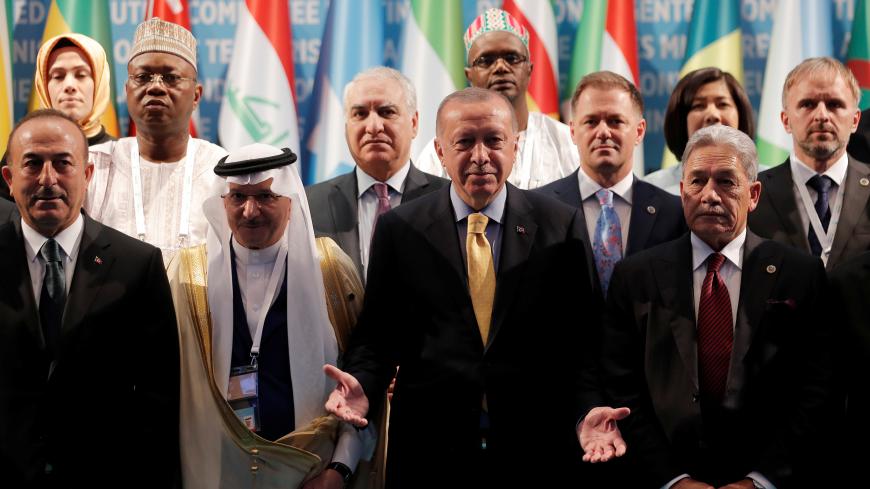 Turkish President Recep Tayyip Erdogan poses for a group photo during an emergency meeting of the Organisation of Islamic Cooperation in Istanbul, Turkey, March 22, 2019. - REUTERS/Murad Sezer

When two adversaries bump into each other, a common solution is to avoid interaction. But that wasn’t an option for Turkish and Saudi officials this week as Ankara turned over leadership of the Organisation of Islamic Cooperation (OIC) to its rival in an unusually frosty handoff.

Why it matters: Heads of state and the governments of dozens of OIC members are attending the 14th summit of the organization in Mecca today. Turkey, however, is being represented by its foreign minister, Mevlut Cavusoglu.

President Recep Tayyip Erdogan’s absence exposes the chill in Saudi-Turkish relations, which hit rock bottom after Saudi Arabia murdered journalist Jamal Khashoggi at its consulate last October. Cavusoglu’s visit to Saudi Arabia is the first high-level Turkish visit to the kingdom since then.

Low-key handover: Turkey handed over the OIC chairmanship to Saudi Arabia at the group’s foreign ministers conference on Wednesday instead of at today's more prominent gathering.

Other issues complicating the Saudi-Turkish relationship include Turkey’s support of the Muslim Brotherhood and its deepening military cooperation with Qatar. The Gulf emirate has been under a land, air and sea blockade by Saudi Arabia and several of its allies since June 2017.

Saudi Arabia’s passive reaction to the US administration's recognition of Jerusalem as the capital of Israel has also been a point of contention — one Cavusoglu did not shy away from during his speech at the conference.

“We shouldn’t forget the Organization of Islamic Cooperation had been established to protect the historical status of Jerusalem,” he said. “I have no doubt that any plan that does not accept the establishment of an independent Palestinian state with Jerusalem as its capital will be rejected by the OIC community.”

Cavusoglu’s remarks were widely interpreted as a message to countries supporting the administration's Middle East peace initiative, including Saudi Arabia.

What’s next: Despite his strong words regarding the Palestinian conflict, Cavusoglu refrained from making any comments on the Khashoggi affair. His silence may be an indication of Ankara’s efforts to de-escalate tensions stemming from the incident.

Indeed, Turkey can ill afford to escalate tensions as it faces an economic crisis and political strife at home, especially when Saudi media outlets are already calling for a boycott of Turkish goods.