Hamas to form body to foil 'deal of the century'

Hamas has recently announced its intention to form a supreme body with the aim of thwarting the US deal of the century in what some officials say trespasses the prerogatives of the PLO. 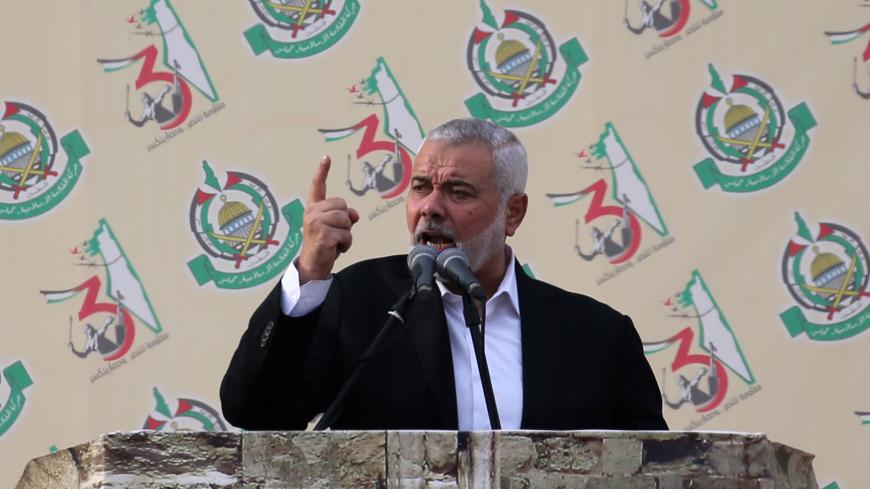 GAZA CITY, Gaza Strip — Hamas intends to form a supreme body composed of Palestinian, Arab and Islamic forces to confront the US deal of the century, a step that the Fatah movement deems as “a major mistake” given that the PLO is the sole legitimate representative of the Palestinian people.

During a seminar April 23 in Gaza City — titled “Mechanisms to deal with the deal of the century” — and attended by Al-Monitor, Salah al-Bardawil, member of Hamas’ political bureau, revealed that his movement is seeking to form a supreme body composed of Palestinian, Arab and Islamic forces to counter the US deal of the century.

Bardawil is yet to reveal which forces are to take part.

In a speech he delivered during a meeting with leaders of Palestinian factions in Gaza City April 27 and attended by Al-Monitor, Ismail Haniyeh, head of Hamas' political bureau, called for the development of a national vision and strategy and a national code of conduct to foil the deal of the century.

According to Jared Kushner, US President Donald Trump's senior adviser, the deal will be announced in June.

Haniyeh said, “Only unity can help us confront this situation, and we are ready to hold urgent meetings with all of the Palestinian forces, especially Palestinian President Mahmoud Abbas and the Fatah leadership, either in Gaza or in Egypt.”

Fatah leader Yahya Rabah told Al-Monitor, “Hamas’ declaration is a big mistake in the presence of the PLO, which is the sole legitimate representative of the Palestinian people. The PLO committees refuse the deal of the century altogether and are fighting it with all their might.”

He said, “The formation of the body entrenches Palestinian division, which Hamas is committed to. Hamas is trying to provide an alternative to the PLO, but only this organization will thwart the deal of the century.”

Rabah added, “If Hamas wants to foil the deal of the century, it should end division and yield to Abbas so that there are joint efforts to foil this deal. We are working with Arab countries, including Egypt, to end the division. Fatah is constantly holding meetings with the Egyptian leadership to discuss mechanisms capable of implementing reconciliation and pressuring Hamas into implementing the national reconciliation agreement signed in Cairo in 2017."

On April 21, Egyptian President Abdel Fattah al-Sisi said during a meeting with Abbas that his country is exerting efforts to allow the reconciliation agreement to come to fruition based on an Egyptian strategy that aims at supporting the role of the Palestinian Authority in the Gaza Strip and foiling any attempts aimed at entrenching division.

Mariam Abu Daqqa, member of the Popular Front for the Liberation of Palestine political bureau, told Al-Monitor, “Any party that does not fall within the framework of the PLO is rejected because it entrenches internal division. We shall not tolerate any alternative to the PLO.”

Hamas spokesman Hazem Qassem told Al-Monitor, “We are constantly discussing with Palestinian and Arab national factions to foil the US deal of the century, which infringes upon the rights of the Palestinian people. These infringements include the right of return and the US recognition of Jerusalem as the capital of Israel.”

“For the deal to be thwarted, division shall come to an end, the Palestinian political system shall be united and a Palestinian national government shall be formed,” Qassem added.

He pointed out that during meetings with Egyptian officials, most recently on Feb. 5 in Cairo, his movement tackled the risks that the US deal poses to the Palestinians. He said that Egypt affirmed it stands with the Palestinian right that is guaranteed by international law and that it cannot be part of anything that infringes upon the rights of our people.

In a final statement following an emergency meeting April 21 in Cairo, Arab foreign ministers reiterated their rejection of any peace deal that does not support the rights of the Palestinian people.

Mohamed Ibrahim, a member of the Egyptian Council for Foreign Affairs and of the advisory board of the Egyptian Center for Strategic Studies, wrote in a May 1 study that Arab leaders, led by Egypt and Sisi, are capable of confronting the deal of the century while maintaining Arab national security and the Palestinian tenets.

“It is a difficult task, but we can do it. We definitely can so long as we rely on rationality, objectivity and Arab unity toward the Palestinian cause,” he added.

Saleh Raafat, a member of the PLO Executive Committee, said April 25 in a press statement, “Hamas’ formation of a supreme body to confront the deal of the century is part of attempts to form an alternative framework to the PLO.”

Of note, the body is expected to assume functions that overlap with the functions of the internationally recognized PLO.

Raafat added, “The deal of the century can be thwarted through adherence to the position of the PLO, which rejects this deal, and through the implementation of the national reconciliation agreement signed in Cairo in 2017.”

Palestinian political analyst Talal Awkal told Al-Monitor, “All Palestinians reject the deal of the century, but the problem is that there is no national strategy to resist the deal. [Hamas] is trying to suggest a formula parallel to the role that should be played by the PLO.”

He said Hamas’ desire to form the body is not likely to come to fruition, as Arab countries are forced to deal with the Palestinian legitimacy represented by the PLO.

Ibrahim al-Madhoun, a political analyst close to the Hamas movement, told Al-Monitor that the body will not serve as a substitute for the PLO but will fill the void left by the organization, which failed to manage the current Palestinian situation, represent the Palestinian people or solve the problems facing the Palestinian cause.

Madhoun said that Hamas, through the body, is trying to block attempts aimed at liquidating the Palestinian cause; it wants to unite the Palestinian efforts. This does not mean that it will serve as an alternative to the PLO, he added.

Despite the recent convergence between Hamas and Egypt, Madhoun found it unlikely for Egypt or any other Arab country to take part in a body that the Fatah movement opposes, and said that all Arab countries will be dealing with the PLO.