Mostafa Bakr has opened a music school in downtown Afrin where he teaches children and adults to play the string instruments of the region, from buzuq to tanbur. 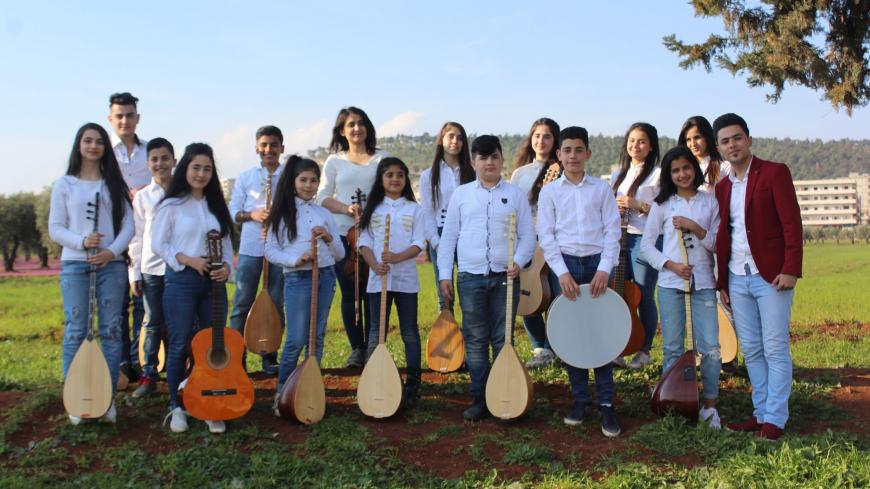 AFRIN, Syria — To the locals, Mostafa Bakr, a young Kurdish musician from Afrin, is a true virtuoso. Bakr established a small music school in the city — the Awaz Institute — where he teaches budding talents the region’s musical heritage.

Afrin is a town in the northern Aleppo countryside with a rich musical past — many families there own an instrument, often a tanbur, a long-necked string instrument that originates from Mesopotamia. Often hung on the wall, the tanbur is a central part of the Kurdish identity and heritage, and is played at weddings, during Nowruz (New Year's) celebrations and other occasions. It is also popular among the younger generation.

Al-Monitor met with Hoshiar Hussein, who is a gifted 16-year-old buzuq player. “I began to play the buzuq when I was nine but I learned to play scales at the institute about three months ago,” Hussein told Al-Monitor.

Haifan Ahmad, 18, plays the baglama, too. “I love this instrument and I sing while playing. The baglama is connected to the Kurds and means a lot to me. It is part of who I am,” she told Al-Monitor.

Bakr said that he owes a lot to Naim Shabab, his teacher and role model. Shabab is a Syrian musician from the city of Afrin, who is known and respected in his hometown because he ran a music school there in 2010-2017. He has taught many young people to play instruments. He currently lives in Erbil, Iraqi Kurdistan, where he also established a music institute.

“Thanks to my mentor Shahab, I have an extensive music experience,” Bakr told Al-Monitor as he gave a tour of his music school. “I read a lot about music and international and Kurdish musicians. I play the tanbur and other string instruments of the region, including the seven-string baglama, the four-string buzuq and the oud, and I teach them at the Awaz Institute.”

“Thirty students of different ages are enrolled in the institute. The two-hour music lessons are scheduled twice a week and cost 4,000 Syrian pounds a month [$8]. This nominal fee allows more students who wish to hone their musical skills to come on board,” he said.

Bakr added, “Traditional music is a cultural heritage and language for communication between people, carrying a message of love and peace and expressing joy and sadness."

On the occasion of Nowruz on March 16, Bakr and his students made a music video that was filmed with modest means on the outskirts of the city.

The video, which shows the young students performing a traditional song, only has just over 1,400 views so far but it has encouraged the students to continue playing music to make their voices heard.