Iraq's pigeon breeders get ahead in international game

Iraq's pigeon breeders, once disdained, are making a name for themselves in international competitions, as well as profiting off the sales of birds in auctions. 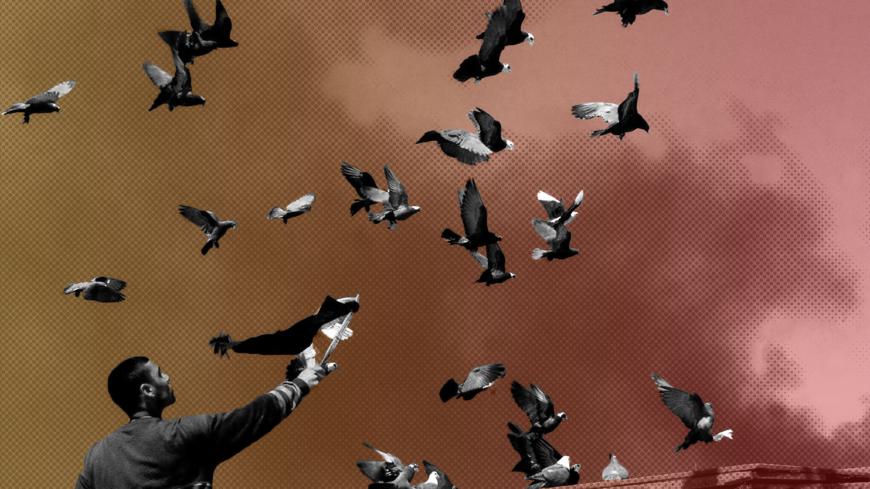 An Iraqi man releases pigeons from the roof of his house in Baghdad, Iraq, April 1, 2003. - Reuters

Abu Mahdi al-Aboudi recently paid over $11,000 for a single pigeon at a high-profile auction in Iraq’s southern port city of Basra. “It is not even the most expensive pigeon I own,” Aboudi, who has bred racing pigeons in Basra for a decade, told Al-Monitor. He proudly added that his new acquisition came from the Janssen Bros of Belgium, who have bred renowned racing pigeons for more than a century.

Aboudi was one of the many pigeon fanciers who participated in the international mid-March auction orchestrated by Pigeon Paradise, or PIPA, which organizes online sales and auctions of pigeons. Hundreds of pigeon breeders and enthusiasts from different provinces of Iraq participated in the auction, in which dozens of birds imported from Europe fetched six-digit prices.

Aboudi has a stock of nearly 400 pigeons, most of them from major breeds, characterized by their ability to return home after having traveled hundreds of kilometers, which makes them ideal for races. His most expensive pigeon is worth 13,000 euros ($14,620).

Aboudi said that he negotiates with PIPA CEO Nikolaas Gyselbrecht on the prices of pigeons from Belgium and elsewhere in Europe, and often manages to considerably lower some of the prices. “The price of a Bros baby in Belgium is $3,900 per squab, but I managed to lower the cost for Iraqi pigeon fanciers through the mating between the birds I own, bringing down the price of the squab to about $2,000, which is considered a win for pigeon fanciers,” he told Al-Monitor.

The races draw many competitors. “The number of racing pigeon breeders exceeded 25,000 in Iraq," he said. "There are about 200 clubs, each of which consists of 10 to 150 members.”

Different clubs use different databases to register their pigeons. In Iraq, the most commonly used database is the Germany-based Benzing and the Belgium-based Bricon, he said, adding that the establishment of a federation for pigeon breeders could unite the clubs and organize auctions and competitions. For the time being, most of the international competitions are organized by foreign companies or platforms.

Murtaza Sharif, the representative of PIPA International in the Middle East, agreed that interest in pigeon breeding is on the rise in Mesopotamia. “Iraq is an important center for breeding racing pigeons, and Iraqi breeders have succeeded in introducing distinctive bloodlines and breeds,” he said, explaining that Iraq has made a name for itself in international pigeon competitions.

Sharif added that Arab and Iraqi pigeon fanciers are among the top participants in PIPA’s global auctions, and have acquired some of the top-rated pigeons with the best bloodlines.

“Though pigeon breeding is one of the oldest hobbies in Iraq, social and economic conditions do not make it particularly easy to continue this tradition,” Ahmed al-Dahabi, a social researcher at the University of Baghdad, told Al-Monitor, referring to the high costs of food and vaccines required to breed pigeons.

“Bird breeders in the past were perceived negatively, but today this is a hobby we can be proud of, as well as a commercial activity and an investment,” Dahabi said, referring to the record sale of a bird by a Kirkuk breeder for $93,000.

The pigeon competitions can also play a role in overcoming sectarian barriers in the country. On Jan. 19, the city of Fallujah in Anbar hosted a race of some 2,000 pigeons, which were released from the southern city of Nasiriyah as an expression of peace and brotherhood among all Iraqis.

Aboudi also said that he and a group of pigeon fanciers donated the proceeds of a 2017 bird auction in Basra — $15,000 — to the families of those killed in the war against the Islamic State.

But if Iraqis want to maintain this national hobby and make a name in the international field, they need to focus more on the health of the birds, pointed out Dr. Thamer al-Kafaji, assistant director general for the Babylon veterinary department.

“Vaccination and medicine for racing pigeons are expensive," he said. "Breeders often need government support, as well as regular veterinary services — such as periodic examinations of the birds — so that they can keep their stock healthy.”

He added that in most areas, veterinary services were “impetuous and lack planning and use of latest medical developments.”