Young Iraqis, along with regional partners, lead the efforts to promote knowledge and enlightenment in the Arab World. 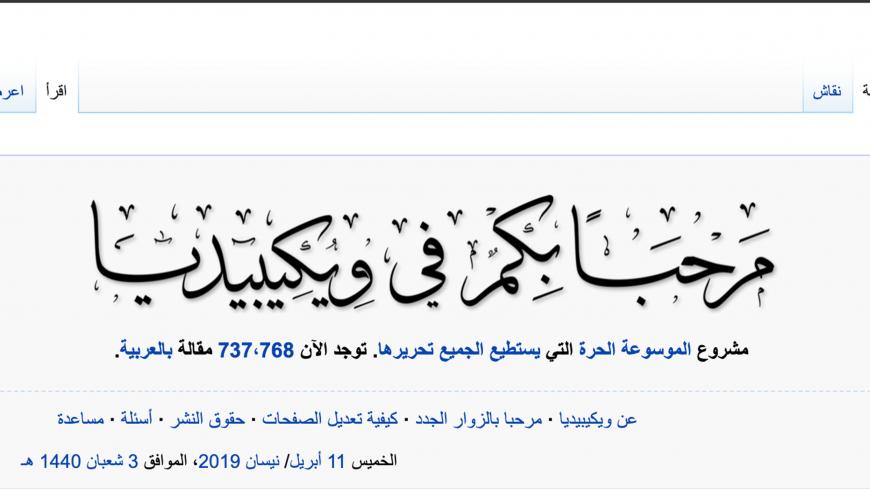 The masthead of the Arabic language Wikipedia site. - Wikipedia

Searching the internet for scientific topics in Arabic can be disappointing. Senan Harba, a 25-year-old dentist from Hillah, Iraq, knows this problem firsthand.

"Wikipedia is my first place to search for any particular topic; unfortunately, lots of topics are not available in Arabic," said Harba, adding, "Since English is not our first language, science students and the general public suffer to get accurate and neutral information."

To compensate for this, Harba follows Facebook pages that spread scientific knowledge on evolution, cutting-edge technologies, social sciences and political schools. This brought him to a newly launched project named Bayt al-Hikma 2.0.

"One evening, I read an advertisement in I Believe in Science — an Arabic-language website that creates scientific content, mostly translations, in Arabic — looking for translators to partner with [the nongovernmental organization] Bayt al-Hikma," said Harba. "An inner voice told me, 'Why not?' I quickly filled out the application form and got accepted," he added.

Besides promoting knowledge, fighting extremism was among the goals for Faisal Saeed al-Mutar when he founded Ideas Beyond Borders, a US-based translation initiative. Surviving years of civil war in Iraq and enduring the murder of his brother, Mutar never gave up his homeland. Arriving in the United States as a refugee in 2013, he vowed to protect other vulnerable people against the destructive forces of authoritarianism and extremism. For Mutar, exposing the younger generation to critical thinking will encourage many to eschew dogma and the road of radicalization.

"People in the [Middle East-North Africa] region form 5% of the world's population; still, 45% of terrorist attacks and 69% of battle-related deaths take place there," said Mutar. "Moreover, it produces 58% of the world's refugees," he added.

Extremist ideology targets vulnerable people who don't have access to global ideas. "By removing the language barrier, more young people in the Arabic-speaking world will be empowered and hopeful and avoid being drawn into violent groups," said Mutar.

Translation was Mutar's way to achieve a bridge between cultures. In 2017, along with over 100 local translators and activists, he launched the House of Wisdom 2.0 to make otherwise inaccessible ideas available to Iraqis and Arabs. The initiative has translated 1.5 million words — whether in articles or books — through its translators in Iraq, Lebanon, Syria, Jordan, Egypt and Saudi Arabia.

"There are many other English-to-Arabic translation projects, most of which focus exclusively on science," said Ahmed al-Rayyis, an Iraqi geologist and community manager of the House of Wisdom 2.0. Rayyis added, "We focus on civil rights, women's rights, LGBT rights, secularism, philosophy, human history, and social and scientific topics."

Moreover, regional publishing houses mostly focus on fiction and ignore many crucial topics, said Rayyis. "Our goal is to develop the Arabic Wikipedia by translating encyclopedic articles," he added.

"My interest in evolution is due to the widespread misunderstandings of the theory," he said. "As for space biology, I believe in the existence of an undiscovered life — [one that] perhaps will never be discovered — outside our known universe. [Meanwhile], biographies form a window into the lives of notable figures who have given us world-changing ideas and theories," Harba added.

Leading enlightenment efforts is not something new to Iraqis, who are the inhabitants of Mesopotamia — once the cradle of civilization. In ninth-century Baghdad, Abbasid ruler Harun al-Rashid established Bayt al-Hikmah — the Arabic name for the House of Wisdom — to house the monumental activity of the translation of Greek and Persian works into Arabic. This institution flourished in the reign of his son al-Ma'mun, making Baghdad the world's biggest hub of science.

"We chose this name for its historical significance," said Rayyis. He added, "That institution was a beacon of science, tolerance and exchange of cultures. The passion for science brought people of different religions and cultures — all Jews, Muslims, Christians and others — into one institution altogether."

Rayyis dreams of recreating that atmosphere. "We want to rekindle our people's golden age and join the global civilization," he said.

For Omar Mohammed, a Paris-based Iraqi scholar and creator and administrator of Mosul Eye, translation is such a valuable magical means. "We need it to build a new future — a future devoid of dictatorship and ignorance," he said.

This project reminded Mohammed of Farah Antoun, a pioneer Tripoli-born enlightenment figure, writer and translator in the 19th century when he translated works into Arabic. "Hearing of Mutar's translation project made me very happy, for the freedom to access knowledge is a way to achieve eternal freedom," said Mohammed.

Upon meeting Mutar in New York this month, Mohammed suggested some books be translated into Arabic.

"Mutar promised to dedicate the project to Mosul University," he said, adding, "We are trying to make the website accessible in Mosul with more contributions from Mosul University scholars."

Currently, the House of Wisdom 2.0 project has a Facebook community of some 84,000 fans.

“We have added more than 900 articles to the Arabic Wikipedia and translated 12 books," said Mutar. He noted, "We lifted the ranking of the Arabic language to the 17th language in Wikipedia from the 19th."

While Arabic is the fourth most spoken language among internet users, only 6% of online content is available in Arabic.

"With our project, the Arabic Wikipedia is ranked 17th, preceded by the Ukrainian Wikipedia," said Rayyis. He added, "There are more than 400 million Arabic speakers, while Ukrainian is spoken by about 35 million people worldwide. We are proud of translating the full English Wikipedia content on biological evolution into Arabic — more than 500 essays."

What is special about the House of Wisdom 2.0, according to Rayyis, is that it is a nonprofit project. "We translate hundreds of articles every month, voluntarily upload them to the Arabic Wikipedia and make them available to everyone for free," he said.

While concentrating on topics debunking conspiracy theories, topics banned in some Arab countries and content that makes people question more, Mutar emphasizes that they have no agenda other than spreading knowledge.

“We are not a political or anti-religion organization, but we embrace some of these controversial books and content because we believe Arab youth should be allowed to make up their own minds about how they want to live their lives," he said.

The reactions they get are quite encouraging.

"Within a few months, 80,000 fans followed us on Facebook," said Rayyis. "The majority of them are from Iraq, especially Baghdad, Najaf, Mosul and Basra. We have received hundreds of supportive messages so far," Rayyis added.

"It is a forum for those who adore knowledge and want to be part of an enlightened society," wrote Ismail Berwari, a lawyer from Dahuk in Iraqi Kurdistan, advising people to follow the project's page on Facebook.

This encourages Rayyis and Mutar to widen the scope of their target in Iraq and beyond. In March, they began translating dozens of articles from English into Kurdish, Persian and Urdu to enrich the Wikipedia content in these languages spoken in Iraq, Iran, Turkey, Syria and Pakistan.

For Harba, this was a chance to make new friends interested in science and improve his translation skills.

"It is a fruitful experience, both personally and professionally," Harba said. He added, "Before that, I had little experience in translation. Over time, I found myself loving what I was doing. Now, a professional translation of medium-length articles takes me only a few hours while it took me days to produce low-quality translations in the beginning."

Harba has a real desire for the project to succeed.

“I want to make the Middle East a better place. House of Wisdom 2.0 gave me the means to do that," said Rayyis.