During a visit by Pakistan's prime minister to Iran, the two countries moved closer toward forming a joint rapid reaction force to combat border insecurity, a plan welcomed by Iranian media as a key achievement in bilateral ties. 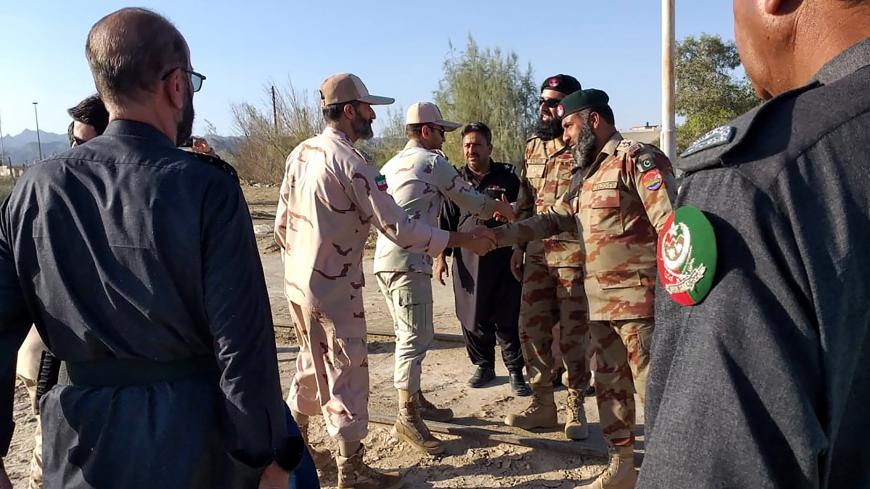 "We are glad the Pakistani side has branded as terrorists the militant groups that conduct inhumane activities in this area," Rouhani added. In the same press conference, Khan told reporters that Pakistan's political elite had recognized the fact that their country's soil should not be allowed to be used for terror attacks against neighbors.

Over the past decades, the issue of cross-border militancy has never ceased to be a thorn in the side of Iran-Pakistan ties. Tehran has been enraged by what it views as Islamabad's failure to oust Sunni extremists whose deadly hit-and-run attacks have targeted Iranian border guards as well as civilians. Most recently, at least 40 soldiers serving with the Islamic Revolutionary Guard Corps (IRGC) were killed after their bus was torn apart by a massive car bomb near the southeastern port city of Chabahar.

While Tehran has been exhausting diplomacy to resolve security tensions, calls have grown particularly from within the IRGC for a cross-border incursion into Pakistan to eradicate the militants. The Islamic Republic alleges that regional foes Saudi Arabia and the United Arab Emirates are funding and training the radical groups.

Pakistan has also played host to an intense rivalry for influence between Iran and Saudi Arabia. A trip by Saudi Crown Prince Mohammed bin Salman in February, and Khan's decision to choose Riyadh as his first destination for a state visit after he took office, fueled much debate and concern in Iran.

But the visit to Tehran seemed to have served as a sigh of relief. "Consultation given to Imran Khan had pushed him toward visiting Saudi Arabia before Iran," former Iranian Deputy Foreign Minister Ebrahim Rahimpour said. "But Khan indicated in his press conferences that the personal choice from the bottom of his heart was visiting Iran," Rahimpour added.

Still, there were precautions to be issued. "Islamabad ought to note that Saudi loans and promises might be only short-term remedies for its economy," pro-Reform daily Etemaad wrote. "In the long run, extremism and terrorism [as a result of ties with Saudis] could inflict irreparable damage upon Pakistan," the daily concluded.

Given the sensitive security situation on the border, according to Reformist paper Ebtekar, "The joint rapid force was the biggest outcome" emerging from Khan's visit. During one of his meetings in Tehran, the Pakistani prime minister also expressed willingness to "follow the model of the Islamic Revolution" in narrowing the gap between the rich and the poor in his country. The remark hit the front page of Javan, an ultraconservative daily affiliated with the IRGC.

On the economic battleground, a key challenge in Iran-Pakistan ties has been transaction limitations coming from Washington's sanctions on Tehran. But Islamabad is weighing another option. Pakistani exporting firms have reportedly proposed that Chinese banks play an intermediary role to facilitate trade with Iran. According to a top Pakistani trade official, this could be worked out if the Industrial and Commercial Bank of China "opens a branch in Pakistan's Baluchistan province."

Grappling with rapidly growing energy demands, Pakistan is in dire need of cheap electricity and oil. While Iran has offered promises, it is not clear how far it could go in delivering them. As part of its so-called maximum pressure campaign, the United States said April 22 that it will not extend oil sanctions waivers granted to eight nations.

One day after the US measure was announced, President Rouhani was scheduled to travel to the two western provinces of Kurdistan and Kermanshah, where he was expected to inaugurate major economic projects. But both visits, as well as several other plans for the rest of the week, were suddenly canceled. While it is not yet clear if the decision had to do with the US announcement about the oil sanctions, there is some speculation that he has been chairing an important emergency meeting with the country's Supreme National Security Council.

The US move on sanctions waivers met near unanimous defiance from both ends of Iran's political spectrum. Kayhan, voicing the stance of Iran's Supreme Leader Ayatollah Ali Khamenei's office, described the move as "Trump's wishful thinking," warning that it will backfire by setting off a significant hike in oil prices. Mardomsalari, which follows a pro-Reform agenda, traced the measure in a joint plot by "the US-Saudi-Emirati triangle of evil." Conservative economic daily Jahan Sanat likened it to the "final act of a play," while the more hard-line Javan called it "one last breath of the US hostility against Iran," referencing a speech Khamenei made a week after the United States designated the IRGC a Foreign Terrorist Organization.