Why Iran is silent about US military deal with neighboring Oman

Iran has demonstrated no sign of outrage at a recent US-Omani military deal as the American Indo-Pacific Strategy seems not to clash with Iran's interests in the region. 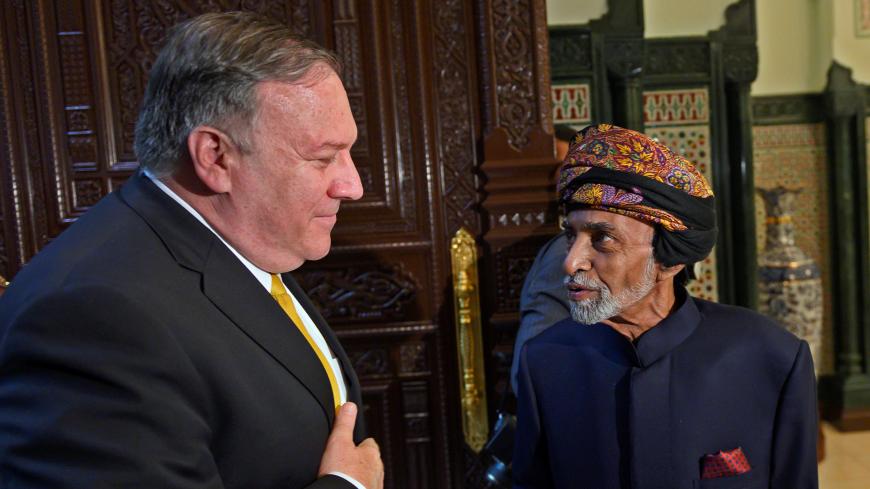 A recent military agreement between Washington and Muscat allowing US forces to use the strategic Omani ports of Duqm and Salalah has been widely interpreted in the context of American pressure on its archenemy Iran. Yet many are wondering why Iran has not reacted to the deal.

Access to the two ports, especially the port of Duqm, has been a goal to pursue for the United States in order to advance its strategies in the Indo-Pacific, an area where Washington and Tehran are not in a confrontational posture. Interests of the two sides may even occasionally converge there.

US-Iran strategic rivalry has shaped and continued to grow mainly over land and not maritime targets. Thus, confrontations between the two sides in the Persian Gulf and the north of the Indian Ocean have been but limited. Meanwhile, in the process of reimposing sanctions on Iran, the Trump administration has focused on demand by pressing Iran's oil customers, rather than on supply and disrupting the transfer of Iranian crude in maritime lanes.

Tehran, on the other hand, made only immediate threats to shut down the Strait of Hormuz, a pressure tool it is no longer resorting to. Both Iran and the United States understand the risks arising from hostility in the strategic strait, including the disruption of a daily transfer of 17 million barrels of crude. The two have, therefore, exercised extreme cautiousness in their Persian Gulf strategic competition in recent decades.

Meanwhile, the military arrangement of the important players there has not witnessed considerable changes in recent years, meaning US access to the Omani Port of Duqm will leave no serious impact on the overall situation in the Strait of Hormuz. In addition, given the decadeslong alliance and cooperation between Washington and Muscat, Oman's logistic assistance to the United States in the region is no novelty.

However, the significance of US access to the Omani ports lies in the fact that it promises more US logistics and a greater role for Washington in the new big game that has been sparked by the rise of China in the Indian Ocean. The importance of the Indo-Pacific as one of the world's major strategic regions in the 21st century has triggered a rapidly tightening rivalry between China and the United States. This has been manifested in the form of two broad strategies: China's 21st Century Maritime Silk Road, or what has been described by some as the String of Pearls, and the US Free and Open Indo-Pacific Strategy. The two policies have served as war tactics each side is employing to access the ports in the area.

In that competition, the ports of Duqm, Chabahar and Gwadar in the north of the Indian Ocean, are also of substantial geopolitical and geoeconomic importance. The region has in recent years seen Chinese pushes to expand ties with Oman and boost the presence in Duqm through an ambitious industrial park with a capacity to draw $10 billion in investment. China has also grown into a crucial player in the Pakistani Port of Gwadar.

But China has not been without a rival. Trying not to fall behind in its strategic competition with Beijing over the Port of Duqm, New Delhi has been intensifying efforts that culminated in an agreement with the Omani government last year as one evident step toward maintaining its status in the increasingly complicated security calculations in the Indo-Pacific.

Still, it is not all about the military agreements Muscat has signed with international players. Only last February, the United Kingdom clinched a similar deal on access to the Port of Duqm for its aircraft carriers, a key step construed by many as a starting point for the return of the United Kingdom to the Indian Ocean. In 2007, US-allied Japan granted $660 million in loans to the Omani government to facilitate development of the same port, which enjoys a strategic standing in Tokyo's Indo-Pacific policy. Later, Japan forged a partnership deal with India as well to further develop the port. South Korea, another key regional friend of the United States, also maintains a limited military presence in the port. As a result, the growing focus by the United States and its allies on the port seems to be more about balancing China's rising influence than countering Iran as a regional power.

Iran has not openly gotten involved in that strategic competition. But it has been boosting regional cooperation with two US allies — India and Afghanistan — in its own Chabahar port. In the meantime, the Trump administration has offered waivers of Iran sanctions to India's development projects in Chabahar. Following the US withdrawal from the Joint Comprehensive Plan of Action in May 2018, Chabahar has remained Iran's sole progressing project involving an important international player. It is also the first megaproject outside Indian borders where New Delhi plays the leading role. In fact, the project in the Iranian port has granted India access to Afghanistan and reduced Kabul's dependence on the Pakistani Port of Karachi, while linking India to Central Asia and Russia. It has also provided for further Iran-India military cooperation in the Indian Ocean.

All in all, Iran seems to be finding itself on India's side in the heated-up rivalry over influence in the Indo-Pacific as the Omani Port of Duqm and Iran's Chabahar share a similar status in the game. While Iran is pushing to present the trilateral cooperation in Chabahar as an economic project and not a strategic-military one, the future of such cooperation will be decided to a great extent by the way the larger Indo-Pacific competition plays out. But strategically speaking, for the time being and under the current circumstances, Duqm and Chabahar are playing on one side of the pitch against Beijing, whose rise New Delhi and Washington are seeking to curtail.