US shifts weapons from Iraq to Syria

The Pentagon rerouted millions of dollars’ worth of weapons and vehicles from Iraq to Syria in the second half of 2018. 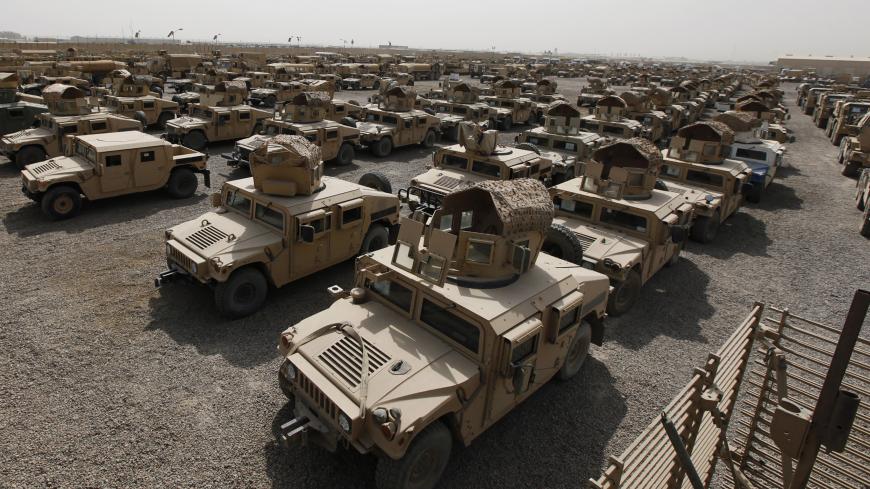 The Pentagon rerouted millions of dollars’ worth of weapons and vehicles from Iraq to Syria in the second half of 2018, Al-Monitor has learned, as US-backed forces cornered the last remnants of the Islamic State (IS).

In a series of notifications to Congress reviewed by Al-Monitor, the Defense Department said it had determined that a bevy of supplies purchased by the Pentagon for the Iraqi military would instead go to the Kurdish-dominated Syrian Democratic Forces (SDF). The Pentagon sent lawmakers its last reprogramming notification for 2018 on Dec. 31, 12 days after President Donald Trump announced his decision to withdraw US troops from Syria.

The stock of equipment includes nearly 50 Humvees, 20 mine-resistant vehicles, 40 enhanced armament carriers and nearly 700 light anti-tank weapons. The Pentagon also approved the transfer of more than 2,400 mortar rounds, 25 mine rollers and dozens of charges used to destroy mines and other explosives, the letters indicate.

Cmdr. Sean Robertson, a Pentagon spokesman, would not confirm whether the supplies had been moved, citing government policy. When Al-Monitor reported the transfer of route clearance equipment to Syria in June, he said it would “assist the SDF in successfully retaking the last remaining [IS-held] territory in Syria.”

“Ensuring that the SDF are sufficiently equipped has been critical to the SDF’s hard-fought campaign to liberate the Middle Euphrates River Valley from [IS] control,” he said last month. “The [Defense] department will always exercise effective and efficient use of the train-and-equip funding appropriated by Congress.”

Experts said the equipment may help the SDF further diminish IS, which beefed up its urban defenses with car bombs, booby traps and other battlefield hazards. Al-Monitor first reported that the Pentagon was transferring equipment from Iraq to Syria in June.

The equipment would be helpful, “particularly to be able to overcome entrenched [IS] defenses” and vehicle-born improvised explosive devices, which the militant group used extensively to slow US-backed forces in Syria’s Middle Euphrates River Valley, said Nick Heras, a Middle East fellow at the Center for a New American Security.

Mazlum Kobane, the SDF’s top commander, said last week IS is just days away from losing control of all its territory in Syria. But the shift in resources may come at a cost for Iraq, which is struggling to regain its military footing even after declaring IS defeated in 2017.

The Pentagon budgeted $800 million to rebuild the country’s armed forces last spring. But experts worry that without US boots on the ground in next-door Syria, Iraq could be forced to pick up the slack, taking on an expeditionary role fighting IS across the border.

“When you don’t have intelligence on the ground and you lose some of the things that are leaving, it will become much more pinpricks from the outside,” said Linda Robinson, a senior defense researcher at the RAND Corporation. “It will become a much more difficult fight to prosecute. It’s first a question of the wolf at the door and then the wolf across the border.”

As Iraq looks to beef up its counterinsurgency operations against IS, and US forces take on more of a training mission, Ambassador Fareed Yasseen said the US troop and equipment presence in Iraq remains to be seen.

The envoy’s assessment aligns with incoming US Central Command chief, Marine Lt. Gen. Kenneth McKenzie, who told Congress in December that Iraq will not be able to pay to maintain US equipment.

Yasseen said Iraq will likely see an “internationalization of the Western military presence that’s there in support of Iraqi military capabilities.” That includes a new NATO training operation led by Canadian Gen. Dany Fortin. The US-led coalition fighting in Iraq told the Pentagon’s inspector general last month that training of Iraqi forces “is of a basic nature” and does not fit US definitions of counterinsurgency instruction.

Though the president visited US troops at al-Asad air base in December, he did not meet with Iraqi officials.

“Every minute we try to spend putting the Humpty Dumpty back together again we are reducing our opportunity to solidify Iraq,” Robinson said. “We have to look at all of the pieces on the chessboard and make the right decision.”