A group of Syrians in al-Bab are working as part of the SalamaTech project to train people on the risks of using cellphones and the internet, in light of the regime’s arrests. 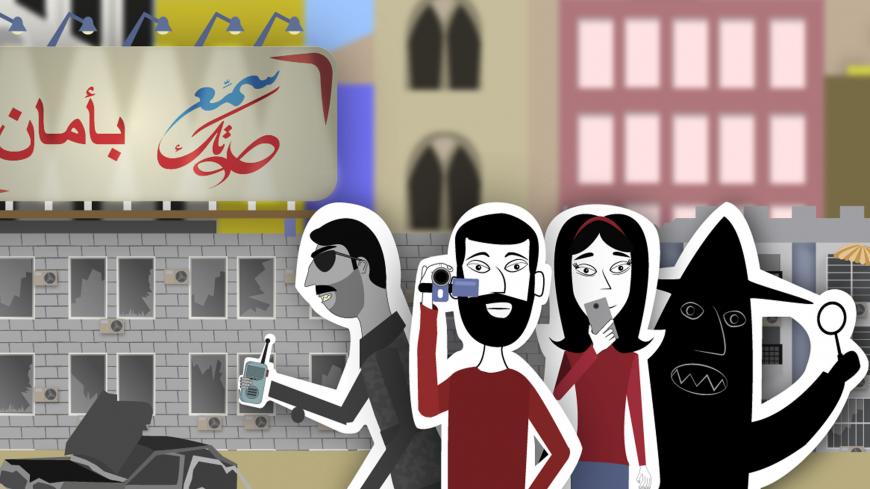 AL-BAB, Syria — Mohammad Hariri is worried about news coming from the eastern Damascus suburbs that the regime recaptured in April 2018. On Feb. 28, security forces affiliated with the Syrian regime arrested three women in the town of Kafr Batna in eastern Ghouta on charges of conspiring against the regime, according to local news websites. Those arrested had contacted their relatives in opposition-controlled areas in northern Syria on the phone.

Such incidents have been on the rise lately in regime-held areas, making Hariri reluctant to communicate with his relatives in his hometown Douma, in eastern Ghouta.

While showing us his cellphone call record, Hariri told Al-Monitor, “I am currently not in touch with my relatives in Douma. The last time I spoke to them was eight months ago. They think the regime is watching everything and that its security apparatus can read messages and listen in on calls. They are afraid of texting and calling me because it might raise security suspicions or lead to arrests.”

He added, “Although we talk about day-to-day matters that have nothing to do with politics, I feel their fear of answering my calls.”

Although cellphones caused a revolution in the field of communication, they expose their owners and contacts to certain risks, especially in Syria. Cellphones contain complete archives of the owner's life, such as conversations, images, (work) emails and call registers, which can be used by the security apparatus.

By searching cellphones at checkpoints and monitoring calls or even hacking systems and online accounts, the Syrian regime is trying to tighten its security grip on the country, especially in areas that it recaptured.

Still, citizens seem to have little information and insufficient experience in the field of digital safety. The nonprofit SalamaTech project was launched in August 2012, and is managed by the SecDev Foundation from its headquarters in Ottawa, Canada. The SalamaTech team offers technical support and training to Syrians, especially those working in the humanitarian field, to ensure digital safety and protection of online accounts and information.

Al-Monitor attended a SalamaTech workshop in al-Bab. Trainer Majd al-Din began by saying, “Always remember that as long as you have awareness and knowledge, nobody can hack your devices or tap your calls and steal your information.”

Din told Al-Monitor, “Digital safety has become essential and all Syrians must adopt it. If information is leaked from somebody’s cellphone, they might face arrest, social harassment or breach of privacy.”

Syrians mainly use social media to stay in touch with family members and friends who migrated to other countries since the start of the conflict.

Din, a programmer and media activist, has been holding digital safety training sessions on behalf of SalamaTech since 2013. He said that an increase in arrests due to call monitoring and users not being aware of digital safety techniques have pushed his team to intensify efforts to teach users what information telecommunication providers have access to and how to communicate safely online and via a cellphone.

Din said that telecommunication companies in Syria — Syriatel and MTN — and the government can listen in on calls and record them through the mobile network. He advised citizens to use messaging apps that ensure encrypted channels such as Wire or Signal.

Syria ended at the bottom of the list in the 2018 internet freedom index, after China and Iran, issued annually by Freedom House, an independent watchdog organization dedicated to the expansion of freedom and democracy around the world. The index indicates the least liberal and most oppressive countries of internet freedom and those that abuse users’ rights the most.

Bloggers and online journalists are the most vulnerable to the risks of using cellphones and the internet. Din said, “Our trainings focus on targeting journalists and activists who work in civil society organizations. When they work in dangerous or hostile environments, they are too focused on doing their job and they overlook potential digital risks.”

He added, “We can resort to easy techniques to remain safe such as VPN services or TOR to hide the connection to the internet and activate a two-step verification on social media to block intruders.”

The SalamaTech team consists of nine digital security experts who are deployed in opposition-held areas in northern Syria, and occasionally in regime areas. Samar Abdul Rahman, a member of the team trains women.

Abdul Rahman told Al-Monitor, “Women need simplified and focused training on digital safety more than men, because the interests of Syrian women do not usually include technology and communication. At the same time, they cannot give up their cellphones.”

She added, “Women feel that their cellphones are a dangerous responsibility, because many of them do not know how to delete their photos completely or deactivate their accounts on social media.”

She noted that going through regime checkpoints poses a significant risk to those traveling with cellphones or laptops. They may be subject to inspection and asked for their passwords, which might reveal unsuitable content such as photos of protests or membership of an opposition social media account, leading to arrest and torture.