Russia is watching widespread Algerian protests with caution, wanting to preserve its assets in the country, as well as its strategic relationship. 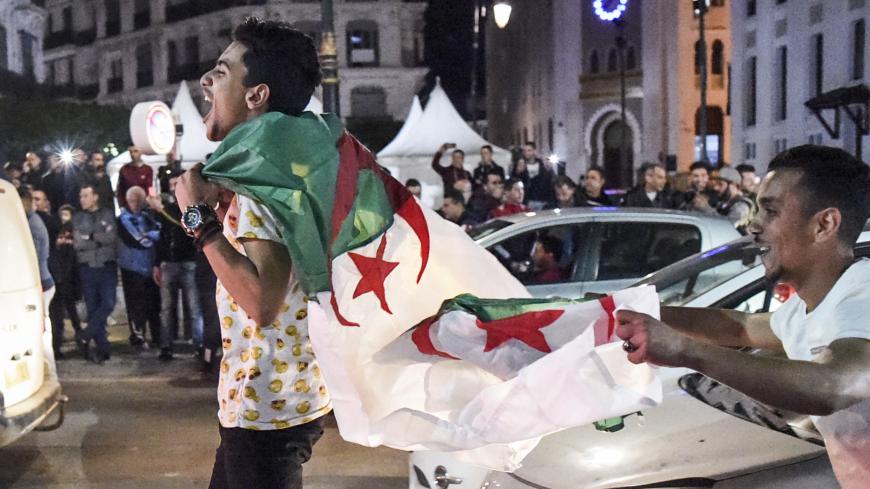 Algerian youths march with national flags during a demonstration in the center of the capital, Algiers, Algeria, March 11, 2019. - RYAD KRAMDI/AFP/Getty Images

Moscow is keeping an eye on Algeria as that country's political leadership undergoes major changes forced by massive but peaceful demonstrations against a fifth term for President Abdelaziz Bouteflika.

The largest protests against him attracted millions of people living in the largest cities, including Algiers, Constantine, Oran, Bejaia, Blida and Jijele, as well as tens of thousands of Algerians living abroad.

Algeria is one of Russia’s most significant trade partners in the region. From 2014-2018, Russia was Algeria's top arms supplier, providing 66% of Algeria's armament imports. That's no small figure, as Algeria was the world's fifth-largest weapons importer during that period.

Russia and Algeria are also important strategic partners, as provided for under a 2001 agreement. Al-Monitor has been keeping track of the relationship since 2017.

Algeria, which had grown fairly quiet in recent years, has seen a surge of civil activity since the aging president stated his intention to run for re-election. Though he apparently retracted that statement in recent days, many protesters remain unconvinced that he indeed will step down, despite questions about his health at age 82. Bouteflika stayed at a Swiss hospital from Feb. 24 to March 10, though officially he was just undergoing "periodic medical checks."

Bouteflika has been avoiding public appearances for a long time This, however, did not stop him from trying to smooth things over with protesters. In a March 3 letter released to the media, Bouteflika promised profound political reforms if he were re-elected. In another letter, published March 7, he congratulated Algerian women on International Women’s Day. But on March 11, he addressed the nation again, this time announcing he had given up the idea of running. He canceled the elections that had been set for April 18.

Bouteflika dissolved the government, appointed a new prime minister and suggested holding an inclusive national conference to draft profound political reforms. The conference is supposed to achieve its goals by the end of 2019; after that, the results of its work will be put to a vote in a referendum — and only then would elections take place.

But the public's initial enthusiasm gave way to the realization that Bouteflika had basically prolonged his fourth term for at least 1½ to two years. The protests continued this week.

These conditions are evidence of a split within the Algerian elites. The protesters have a wide pool of supporters, including a great variety of opposition factions — from radical left to Amazigh (Berber) and Islamist movements. These include, on one hand, entities that earlier were considered government puppets, and on the other hand, executive administrators such as city mayors and leaders of influential public organizations such as the Algerian National Organization of Moujahidines — veterans of the war for independence.

Even the powers that supposedly are bound to be fundamentally opposed to the protesters are commenting on the situation with significant caution. For instance, Gen. Gaid Salah, considered the strongest leader among the security forces, said March 10 that the army has the same vision of the future as the Algerian people and will fulfill its duty to secure elections and the Algerian people’s right to express their will safely and freely. However, he also expressed concern that some actors, both foreign and local, might try to misuse the situation against Algerians by destabilizing the country. In a March 13 speech, he highlighted this potential threat again.

The foreign actors, for their part, tend to be approaching the situation quite carefully. France had supported Bouteflika’s plan, causing harsh criticism from the Algerian opposition. President Emmanuel Macron’s attempts to moderate the position of his country so far haven't been effective.

At the same time, the United States voiced its support of the people's right to protest peacefully.

Moscow has observed the events with great attention, but waited to make any official statements on the situation. Considering that Russia’s influence in the region has grown significantly in recent years, it sought a well-calculated reaction. The prevailing narrative in the Russia-language media, however, views the protests in Algeria through the lens of a “belated Arab Spring” and draws parallels with the 2011 uprisings in Egypt.

The Russian Foreign Ministry didn't comment on the situation in Algeria until March 12.

"We perceive the events in Algeria as a strictly domestic affair in a Russia-friendly country. With that, we hope that the existing problems will continue to be settled in a constructive and responsible manner in the framework of a national dialogue oriented toward stability and further advancement of political and socio-economic transformations in the interest of Algerian people," ministry spokeswoman Maria Zakharova said.

It's true that in recent years, the international community has generally viewed Russia as a conservative nation tending to back up existing political regimes and to object to revolutions and mass protests. This is obviously proved by the Kremlin’s consistent stance toward the “color revolutions” in post-Soviet countries, the turmoil in Syria and, in recent months, in Venezuela. Moscow’s actions, however, are more nuanced than this.

For instance, Russia, unlike France, refused to support Zin el-Abidine Ben Ali in the first days of the Tunisian revolution of 2011, Hosni Mubarak during the Egyptian uprising or Moammar Gadhafi during the conflict in Libya — even though the Russian public rooted for the latter almost unanimously.

The 2018 unrest in Armenia was met with similar restraint. In general, the Kremlin’s discontent seems to be caused not by mass protests themselves, but rather by foreign intervention into the political process, both explicit and disguised, on one hand, and events spiraling out of legal boundaries on the other. Considering that the nature of the situation in Algeria makes it likely to stay within these boundaries, it's quite possible for Moscow to maintain its reserved stance. Moreover, in this particular case, Russia’s objectives seem to be the same as those of Europe and the United States — to enable a peaceful political process. This would allow Algeria to maintain its partnership with Moscow and successfully implement existing contracts.

Though the situation in Algeria may develop in a variety of ways, the country, as viewed by Russian experts, retains the potential to demonstrate its regionally unique capacity for peaceful internal democratization and to emerge from its roots and refuse to revive previous authoritarian tendencies while also maintaining stability and constitutional order.

Moscow is now tasked with finding scenarios to minimize the risks of political chaos, uncertainty and violence.