The Lebanese government is discussing economic reforms aimed at reducing the country’s budget deficit, a key condition to receive billions of dollars worth of foreign investments. 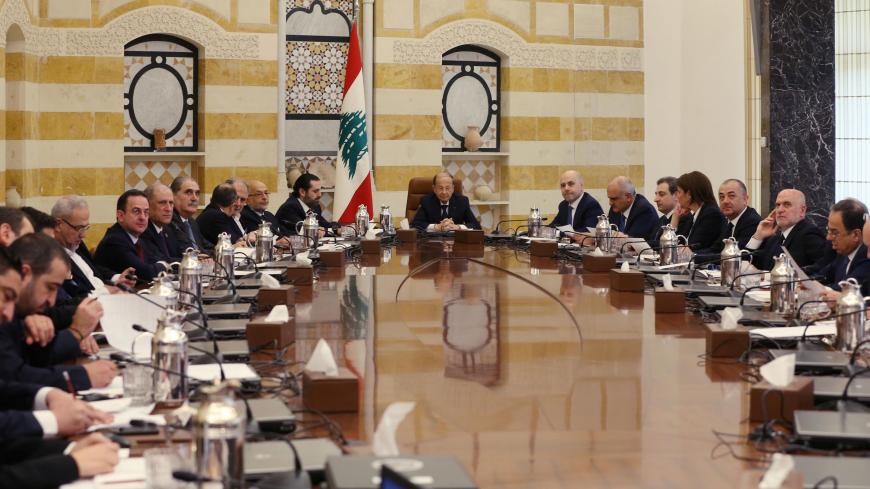 Almost two months after forming a new Cabinet on Jan. 31, Lebanon’s government has begun to tackle its next challenge: passing vital economic reforms that aim to decrease the country’s budget deficit in order to unlock billions of dollars in pledged foreign investments and jumpstart economic growth.

While optimism among analysts about the implementation of these reforms remains generally low, Cabinet ministers claim there is a broad consensus across the government to cut costly electricity subsidies. According to officials from the Ministry of Energy and Water, a policy paper on the issue from the ministry is set to be released this week. Top politicians have also agreed that public pension reforms and measures to combat tax evasion will also be key points in negotiations that will take place over the coming weeks, and if passed, such measures are likely to have a significant impact on Lebanese public employees and consumers.

Economically and fiscally, Lebanon is suffering across the board: Its budget deficit sat at an estimated 11% of the GDP in 2018, its debt has ballooned to 150% of the GDP, and its economy was projected to have grown only by 1% in 2018 by the World Bank. In order to finance a host of public projects, Lebanon secured over $11 billion in soft loans from foreign investors at the Economic Conference for Development Through Reforms (CEDRE) conference in Paris in April 2018, but the release of the funds is conditioned on the country being able to reduce its deficit by 5% over the next five years.

Kevin Daly, the investment director for emerging market debt at Aberdeen Standard Investments, said reforms that would lead to such a reduction are crucial to encouraging growth, helping the government finance itself and increasing trust in the new Cabinet.

“Time is of the essence and [the government is] at a critical juncture now,” he told Al-Monitor. “The market is growing increasingly concerned about debt sustaining ability, and rightly so because they are running out of tricks at this stage.”

One piece of the reforms that nearly every political party has agreed to tackle is cutting long-maligned subsidies to the electricity sector. These subsidies currently account for $2 billion per year — about 8% of Lebanon’s entire budget. But the subsidies have failed to alleviate frequent blackouts and unequal power distribution that have plagued the electricity system ever since the end of the Lebanese Civil War.

“We don’t have a sufficient supply of electricity, so the main issue now is how to break even electricity first,” Information Minister Jamal Jarrah told Al-Monitor, stressing that the electricity cuts have become a top priority for politicians.

Officials from the Ministry of Energy and Water told Al-Monitor that a policy paper on electricity will be made public and submitted to the Council of Ministers this week, and on March 15, The Daily Star reported that General Electric, Siemens and Mitsubishi had shown “immense interest” in building two new power plants under a potential new power plan. The plan would aim to provide 24-hour electricity across Lebanon for the first time in decades.

Lebanon’s Minister of Economy and Trade Mansour Bteich told Al-Monitor he was confident about the Energy Ministry’s ability to come to a “comprehensive proposal” on the issue.

Mona Sukkarieh, a political risk consultant and co-founder of Middle East Strategic Perspectives, told Al-Monitor that moves like these, coupled with promises to implement 24-hour power in the new Cabinet’s policy statement released on Feb. 7, show that the government is more serious about tackling these reforms this time in order to meet the CEDRE goals.

“The problems that we have in the electricity sector are relatively easy to solve,” she said, adding, “The reason why we haven’t yet is not because it’s technically hard to come up with solutions, but rather because there was no political agreement over settling this issue.”

According to The Daily Star, under the new plan, the price for electricity for citizens will increase from 9 cents to 14 cents per kilowatt, but the cost may fall with time.

“The public sector has to ensure that there is enough competition in this sector,” Sami Nader, director of the Levant Institute for Strategic Affairs, told Al-Monitor, “because only competition can reduce prices, improve the quality of service and ensure there is no monopoly at this level.”

According to Bteich, 37 to 38% of Lebanon’s budget goes toward paying public wages, salaries and pensions. This sector, in particular, is weighed down by corruption, as reports that the government made 15,000 illegal hires before 2018 demonstrated. Yet unlike electricity, little can be cut from this piece of the budget, as many wage and salary increases were already approved in 2017.

“We don’t intend to cut the salaries, but to review some advantages here,” said Bteich — who will likely also sit on the 2019 budget committee — referring to public benefits and pensions.

Jarrah echoed his concerns about pensions, drawing attention to the fact that their cost may rise to $6 or $7 billion in the coming years.

Even though the government will maintain a hiring freeze through 2019 according to the Cabinet’s policy statement, Nader said that the fiscal benefits of this freeze will not take effect for years because money will still be spent on paying employees during that time. For this reason, dealing with pension schemes is a must.

Alongside the wage hikes and new public hires, an increase in the value-added tax (VAT) was also passed in 2017, yet it failed to meaningfully increase revenue. Now, according to Jarrah and Bteich, a significant section of Lebanon’s parties are eager to bring in funds by tamping down tax evasion, which resulted in an estimated $5 billion in revenue lost in 2017, according to Audi Bank.

“This is a key issue for me and for a lot of ministers,” said Bteich, stating that tax evasion will be one of the topics the budget committee is slated to discuss.

In addition to increasing the collection of existing taxes, Jarrah — who is a member of Prime Minister Saad Hariri’s Future Movement — told Al-Monitor that he and his party would like to see an increase in the VAT from 11% to 15% for spending above a certain amount for certain income brackets.

But Bteich, who is a member of the Free Patriotic Movement, is not convinced and says he has no intention to raise taxes. The two ministers also disagree about when to lower interest rates on state loans, pointing to just one of the many disagreements that still need to be overcome before a wholesale reform process can be implemented.

Aside from these measures that would affect the finances of ordinary Lebanese, both Bteich and Jarrah emphasized the need to combat corruption in public spending. But despite a recent anti-corruption push by Hezbollah and the economy minister’s assurances that the political class is ready to tackle this drain on funds, analysts like Daly remain pessimistic about the potential for these efforts to translate into real changes.

For now, confidence in parliament will likely last on the electricity issue, as proposals to address tax evasion and public sector hiring and pensions are negotiated. Yet given Lebanon’s political history, the risk of failure to reach an approval on these reforms is high, which could potentially trigger damaging debt restructuring or even default if sufficient cuts are not made. In the short term, with anti-corruption measures unlikely, higher electricity costs, more efficient tax collection, a partial raise of the VAT or a cut to pensions would all take a toll on Lebanese citizens, exacting a society-wide price for avoiding economic collapse.