Prime Minister Benjamin Netanyahu has kept quiet so far on the matter involving US Rep. llhan Omar, D-Minn.; he knows his policies have been helping reduce Democratic support for Israel for years. 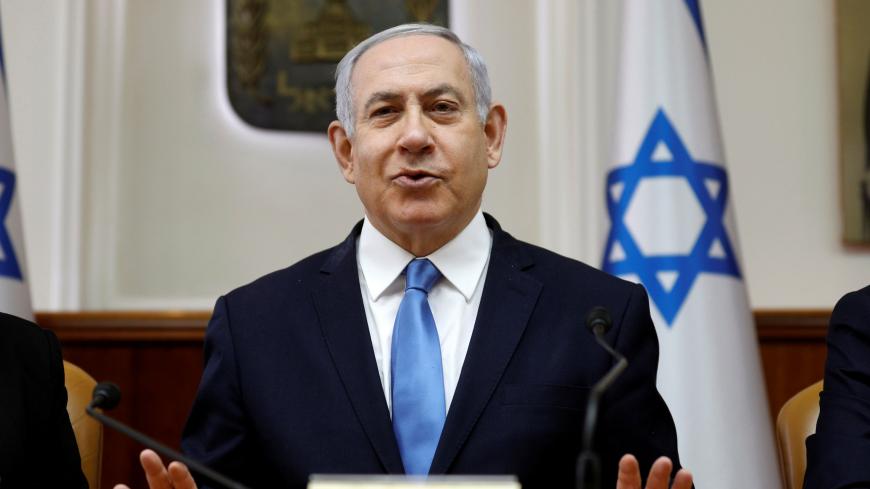 When someone plays into his hands, Prime Minister Benjamin Netanyahu never misses an opportunity to lob the ball into his rival’s court. It happened again March 10, when television presenter and model Rotem Sela wrote on her Instagram account that Israel is a state of all its citizens and that Arabs, too, are people. Later that day Netanyahu set her right and reminded his many followers that Israel is the nation-state of the Jewish people, and only of the Jewish people (as stated in the Nationality Law adopted last year by his ruling coalition).

Just two days prior to the storm Sela precipitated, Netanyahu received a handsome political gift from Washington and did not even bother tweeting his thanks. President Donald Trump said the Democratic Party had become “anti-Israeli and anti-Jewish” after lawmakers refused to discriminate between anti-Semitism and other hues of racism, including Islamophobia.

Trump’s March 8 condemnation of the Democrats followed a House vote supporting a broad resolution slamming bigotry of all kinds, without directly condemning Rep. Ilhan Omar, D-Minn., for tweeting that she “should not be expected to have allegiance/pledge support to a foreign country in order to serve my country in Congress or serve on committee.” She also hinted that the pro-Israel lobby buys lawmakers’ support with money, or in her own words, support for Israel in the United States was “all about the Benjamins” (in reference to US $100 bills carrying the image of Benjamin Franklin). Leading Jewish organizations accused Omar of anti-Semitism and demanded that Congress explicitly and unequivocally condemn the comments of the young Muslim representative.

On the other hand, heads of the liberal wing of the Democratic Party, among them three presidential hopefuls, declared their support for Omar and accused her critics of hypocrisy. House Speaker Nancy Pelosi, D-Calif., claimed the resolution, which Democrats adopted unanimously, does not relate specifically to Omar’s remarks but rather to every expression of hatred, including hatred of Muslims. Jewish members of Congress did not conceal their disappointment with the resolution’s final language and Republicans scored brownie points with donors to the American Israel Public Affairs Committee.

Netanyahu, a real pro when it comes to US politics, sat out the storm. He let slide an opportunity allegedly redolent with anti-Semitism, provided by a pro-Palestinian, pro-Arab member of Congress at the height of his re-election campaign, to goad the Israeli “leftists” allegedly plotting to unseat him with the support of Palestinian/Arab-Israeli lawmakers. Netanyahu seems to have concluded that a raucous clash with the majority party in the House would damage his reputation as “Mr. America.” As a poll junkie, he obviously read the March 6 Gallup poll indicating a sharp drop in American support for Israel compared with support for the Palestinians. The sharpest decline was recorded among Democratic voters: Fewer than half of those polled expressed support for Israel.

A senior Israeli diplomat told Al-Monitor this week on condition of anonymity that the reality reflected in the poll results would become harsher for Israel as long as it maintains its current policy on issues of democracy and diplomacy. Crony capitalism, he added, is typical of American democracy without exception, and therefore Omar’s criticism was “a distinctly black anti-Semitic comment.” Nonetheless, said the diplomat who has long years of service in Washington under his belt, “There is a risk that Israel’s behavior would legitimize the radical anti-Semitic margins.”

Danny Ayalon, a former deputy foreign minister and Israel’s ambassador to Washington under the government of Ariel Sharon, said he thought that what some term a growing anti-Semitism of a small minority within the Democratic Party is troubling and dangerous. “The Democratic leadership must nip this phenomenon in the bud,” Ayalon told Al-Monitor. He said the Israeli government must double down on its efforts to reach out to Democrats and restore the natural relationship with them — a reference to Netanyahu’s unwritten alliance with conservative circles in the United States.

According to a report issued by the Jerusalem Center for Public Affairs, Malcolm Hoenlein, vice chair of the Conference of Presidents of Major American Jewish Organizations, said March 10 that in contacts with Democratic leaders, he found that they were very uncomfortable with Omar and her positions. Speaking at a special panel that was organized by the conservative institute in the wake of the latest wave of anti-Semitic attacks in the US and in Europe, Hoenlein urged Israel to work more closely with the Democratic Party.

One can read between the lines of Hoenlein’s words criticism of Netanyahu for aligning himself with the ultra-nationalist Otzma Yehudit party. Hoenlein argued that Israel’s conduct has not made it any easier for their American friends to deal with anti-Semitism. The veteran official noted that less than 1% of Americans follow the Israeli campaign, but that now almost everyone knows a radical party is running in the elections.

Hoenlein also said the key lies with Omar and her parties' donors, including those in her constituency who feel that she does not represent them. It would be interesting to know whether participants at the event noticed that by his remarks Hoenlein was indirectly confirming Omar’s argument that Jews buy the support of lawmakers with "Benjamins.’’

Al-Monitor approached the Jerusalem Center spokesperson’s office to verify the English translation of Hoenlein’s quotes (as they appeared on the Hebrew summary of the event), but after this contact the text was erased from the site and the phone of the spokesperson was disconnected.

Shlomo Gur, who served as Israel’s deputy ambassador to Washington in the 1990s, said that in addition to the decline in traditional US bipartisan support of Israel based on common values, Netanyahu’s policy has created a rift within the American Jewish community. “There are avid pro-Israel fans among the Democrats who privately say some harsh things about the [Israeli] government’s policy while supporting it enthusiastically to the outside,” Gur told Al-Monitor. “They warn that if the situation persists, even friends like themselves would not be able to support Israel in the international arena and not even in aid.”

Knesset member Mossi Raz of the left-wing Meretz party has no problem with the term “dual loyalty,” telling Al-Monitor that “as long as the basic interests and values are the same, as we usually see in the relationship between Israel and the US … dual loyalty is legitimate and even welcome.” For example, there is nothing wrong with the fact that a significant number of Arabs in Israel feel loyal both to Israel and to the Palestinian people. The common denominator of both is loyalty to the principle of equality and to a diplomatic solution of two states living side-by-side in peace.

The State of Israel is walking a fine line between allegiance to a just democracy and allegiance to liberal Jewish values. By severing this delicate tie, the strongest man in the state has undermined Israel’s strategic interests far more than a handful of anti-Semitic members of Congress have.