After Palestinians broke open the Bab al-Rahma gate and decided to keep the prayer house open and renovate it, Israel has given them a deadline to close it up again — which isn't expected to happen. 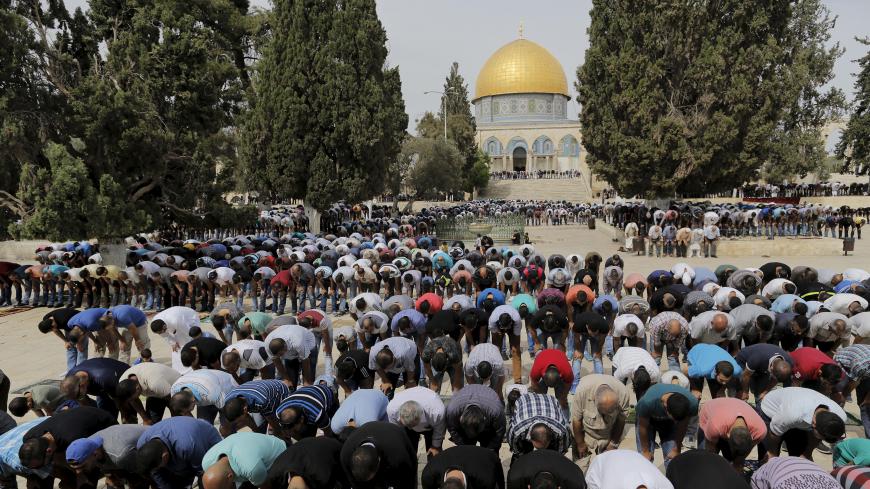 Al-Aqsa Mosque is seen in the background as Palestinian men take part in Friday prayers on the compound known to Muslims as Noble Sanctuary and to Jews as Temple Mount in Jerusalem's Old City, Oct. 23, 2015. - REUTERS/Ammar Awad

RAMALLAH, West Bank — Tension has been growing at the Bab al-Rahma (Mercy Gate) prayer house on the grounds of the Al-Aqsa mosque complex, particularly since the deadline for Palestinians to close the building is now over and Israeli-Jordanian talks to resolve the crisis failed. Israel’s Antiquities Authority entered the Bab al-Rahma prayer house, with back-up from a large contingent of Israeli police, March 10, and took measurements of the premises and walls, and pictures of the prayer house.

Israel's Magistrates Court in Jerusalem on March 4 gave the Islamic Waqf (Endowment) Council one week to comply with the prosecution’s order to shut down the Bab al-Rahma building. The situation could now go in any direction, as the deadline has passed and the council did not repond to the court's request.

The council, which has authority over holy sites, wasted no time in dismissing the demand. After a March 5 emergency meeting of the council, member Hatem Abdel Qader said, according to al-Watan news, “The council will not respond to the occupation’s courts when it comes to the Bab al-Rahma prayer house, which will remain open to worshippers." He added, “We will not give in to the threats of the occupation’s authorities."

These remarks indicate that a standoff between worshippers and Israeli police is likely in the coming days. However, news reports said Friday prayers were peaceful March 8, even though an estimated 40,000 worshipers showed up to pray at the Bab al-Rahma gate, and Israel had beefed up security there.

Bab al-Rahma had been closed for 16 years. A group called the Heritage Committee, which Israel considered a terrorist organization, had made the ancient prayer house its headquarters from 1992 until it disbanded in 2003. Israel then shut the building down.

Last month, Palestinians in Jerusalem opened the prayer house again. Worshipers broke open the locks on the metal gates in the courtyards leading to the building. The 11.5-meter (38-foot) overall height of Bab al-Rahma gate makes it the biggest external gate in the compound’s eastern wall.

Israeli authorities started an arrest campaign against dozens of Palestinians in Jerusalem. On March 3, the authorities also issued 40-day restraining orders against the chairman of the Islamic Waqf Council, Abdel Azeem Salhab, and the head of the Palestinian Prisoners' Society, Nasser Qous, banning them from approaching al-Aqsa. Najeh Bkerat, deputy director of the Islamic Waqf Department, and mosque guard Arafat Najib were also issued restraining orders for four months and six months, respectively.

Israel's targeting of council members provoked Jordan's ire. Jordan is the mosque complex's custodian and had appointed Salhab to lead the council. Jordan’s Petra news agency on March 3 quoted the Jordanian Ministry of Awqaf Islamic Affairs and Holy Places as saying that this targeting is tantamount to “a desecration of the ... custodianship over the Muslim and Christian holy sites.” The ministry emphasized that “using [restraining orders] as a pressure tool to meddle in the mosque’s [affairs] is unacceptable."

"We are now convinced more than ever that Bab al-Rahma is an integral part of al-Aqsa. It is non-negotiable, indivisible and non-sharable," the ministry added.

Bkerat told Al-Monitor that Israel is planning to secure a foothold in al-Aqsa through the Bab al-Rahma prayer house, which it wants to turn into a Jewish synagogue, believing that the Bab al-Rahma gate is the temple’s gate. This is why the confrontation has such importance, and could determine the future of Al-Aqsa, which Israel seeks to divide, Bkerat said.

“The Waqf Council has made the decision to keep the prayer house open. Israel needs to realize that taking any measures pertinent to Al-Aqsa will be like a powder keg it decided to ignite, but doesn't know how to extinguish. It will be playing with fire,” he said.

Bkerat said the council coordinated with Jordan on the decision to open the prayer house and to restore its condition. Israel hasn't responded to a request to allow renovation materials into the complex, he said.

The opening of the Bab al-Rahma gate has been a new challenge to Israeli Prime Minister Benjamin Netanyahu, particularly since it came prior to the April 9 elections in which he seeks to win Israeli settlers’ support.

Grand Mufti of Jerusalem Muhammad Hussein told Al-Monitor that the decision to open the prayer house is irreversible because the building is a part of the mosque complex. The decision is supported by the Waqf Council, which is tasked with managing the affairs of Al-Aqsa mosque, in coordination with Jordan and the Palestinian leadership, he added.

"The prayer house is part of the battle for Al-Aqsa, which the settlers and Knesset members enter on a daily basis. As the Israeli elections approach, the Israeli political parties seek to exploit the Palestinians’ religious and cultural heritage to win Israeli voters’ support," Hussein said.

Mahdi Abdul Hadi, a member of the Waqf Council, told Al-Monitor that Israel politicians, and particularly Netanyahu, are escalating their discourses and threats against Al-Aqsa for political gain. This is a violation of UNESCO resolutions, which affirm that Al-Aqsa is an Islamic mosque, he added.

“The decision to open the Bab al-Rahma prayer house is a result of the Jordanian decision to expand the Waqf Council from 11 to 18 members, upon the Jerusalemites’ request. The council held its first meeting Feb. 14 and made an inspection visit to the prayer house,” Abdul Hadi said.

Abdul Hadi went on to say, "The council decided to keep the prayer house open and to restore it, and appointed its imam. ... The Israeli arrests, summonses and restraining orders are part of a psychological war Israel is waging against us.”