The Turkish and Russian foreign ministers will meet in Antalya Friday to discuss a range of topics as a controversial missile deal between Ankara and Moscow threatens to further deteriorate Turkey-US ties. 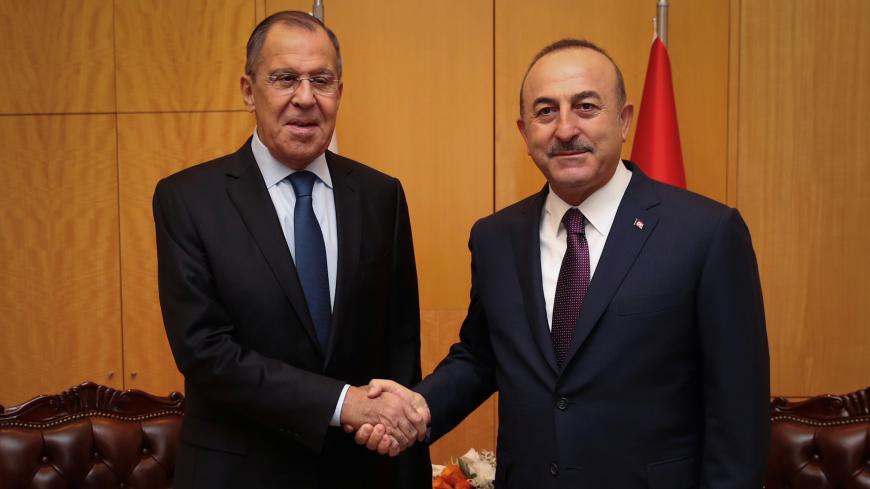 The meeting has been billed as the Seventh Turkish Russian Joint Strategic Planning Group Meeting being held under the aegis of the Turkish Russian High-Level Cooperation Council.

The Turkish Foreign Ministry said that a “2019-2020 Plan for Consultations between the Foreign Ministries of the Republic of Turkey and the Russian Federation” would be signed at the conclusion of the talks. The verbose labelling that would have warmed Lenin’s heart is intended to signal deepening ties between the historical rivals just as Turkey’s links to its traditional NATO ally the United States grow brittler by the day.

Cavusoglu and Lavrov are scheduled to tackle a wide range of issues including passport-free travel for Russian citizens who flock to Antalya every year and most critically Syria.

The two countries are working together to rein in al-Qaeda-linked jihadis in the rebel-held province of Idlib who remain the biggest challenge to Syrian President Bashar al-Assad’s efforts to regain full control over the western part of the country. Russia perceives the Russian jihadis among their ranks as a threat.

Similarly, Turkey views the Syrian Kurdish People’s Protection Units (YPG) as its top enemy. Russia has eased Turkish operations against the group, most recently by letting the Turkish army invade the Kurdish-majority Afrin enclave in January 2018, in sharp contrast with the United States, which continues to defend the YPG in the areas under its protection in northeast Syria.

It's not been all smooth sailing, however, with Russia repeatedly rebuking Turkey for failing to defang the group known as Hayat Tahrir al-Sham, which further consolidated its grip over Idlib after routing rival rebel factions including Turkish-backed groups earlier this year.

But on March 26, Turkish and Russian forces conducted independent but coordinated patrols along a demarcation line separating Tell Rifaat in Aleppo governorate and Marea in the Turkish-controlled Euphrates Shield zone. The move mirrors joint Turkish and US patrols further east near Manbij, also meant to appease Turkish worries over the YPG and its Arab allies who run the Arab-majority town.

An official from the YPG-led Syrian Democratic Forces (SDF) confirmed that synchronized Russian-Turkish patrols had taken place around Tell Rifaat. Speaking on condition that he not be identified, the official said, “The patrols are meant to telegraph the positive relationship between Turkey and Russia and don’t have much impact in the field per se.”

Tell Rifaat is a strategic gateway to Aleppo, much like Manbij, and was ceded by the SDF to Russian and Syrian regime forces in March 2018 to pre-empt any Turkish moves on the town.

Lavrov’s visit comes amid louder warnings from Washington over Turkey’s refusal to scotch the S-400 deal. Turkish President Recep Tayyip Erdogan, who will make his fourth trip to Russia this year on April 8, reaffirmed that Turkey would buy the Russian missiles no matter what Washington had to say.

In response, US officials quoted by Reuters today said the United States would likely freeze deliveries of F-35 fighter jets to Turkey if it proceeds with the Russian missile purchase and that Turkey’s participation in the F-35 consortium was not necessary for the production to proceed. An unnamed source with direct knowledge of the United States’ position told Reuters, “There are about 800 parts that Turkey makes for the F-35, and of them, very few are sole," adding that single-source parts from Turkey could be replaced by contractors who had previously bid to make them. “Turkey is not too big to fail,” the source said.

In a further blow to Turkish-US ties, an Istanbul court ruled today that a Turkish employee of the US Consulate being tried on thinly supported espionage charges should remain in custody pending the outcome of his trial. Metin Topuz, a veteran consulate employee who served as a translator and assistant for the US Drug Enforcement Agency, has been held since October 2017 over his alleged connections to Fethullah Gulen, the Pennsylvania-based Turkish cleric who is accused of masterminding the failed 2016 coup to overthrow Erdogan.

Evidence against Topuz in the 78-page indictment, a copy of which was obtained by Al-Monitor, is largely based on his contacts with Turkish security officials who helped spearhead a quashed corruption probe against Erdogan and his inner circle in December 2017. Most of them are in jail for their alleged role in a conspiracy to topple Erdogan. Topuz protests his innocence, saying he communicated with the officials as part of his routine duties. That view is echoed by US State Department officials, who are demanding his immediate release along with that of fellow consulate employee Mete Canturk, who is under house arrest on similar charges.