As state propaganda frames Turkey's upcoming municipal elections as a matter of the president's survival, the government is welcoming paramilitary groups that declare allegiance to the state. 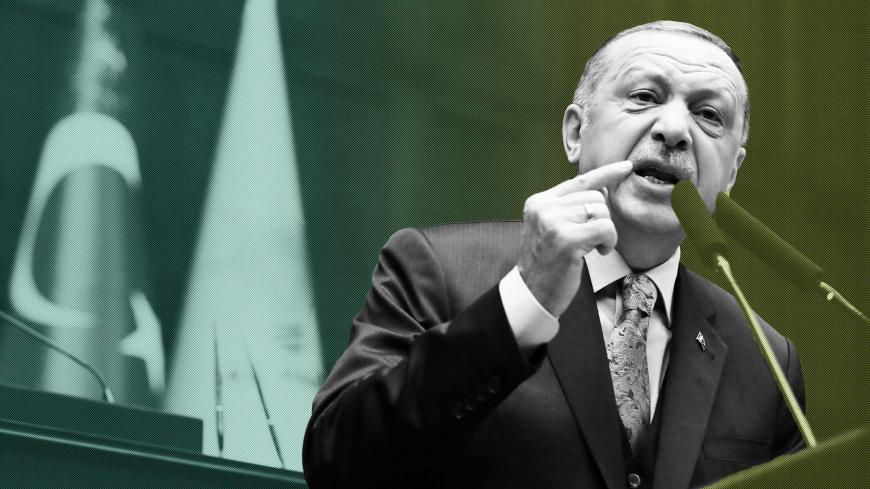 Turkey's voters will elect their mayors, city council representatives and mukhtars (leaders of neighborhoods and villages) come March 31. But how "free" will the elections be?

President Recep Tayyip Erdogan’s coalition, formed between his Justice and Development Party (AKP) and the Nationalist Movement Party (MHP), is branding the elections a matter of survival, assigning to it all the fervently militaristic attributes of a war. On Jan. 11, Interior Minister Suleyman Soylu sent a memo to governors and security forces in 81 cities titled “Election Measures.” It warns, “Remarks [by anyone] that attempt to manipulate the results of the elections will not be allowed.” How this will be prevented isn't specified, though the memo promises — or threatens — close monitoring.

A few critical voices remaining in the Turkish media asked what the government is really preparing for with this memo.

The most daunting aspect of the memo is the language it employs about those who are in charge of public safety. Along with official security personnel — which include the police, gendarmerie and coast guard — the memo calls for regular and volunteer security guards to be on duty.

In October 2016, village guards changed their name to security guards; they are a paramilitary unit active since the mid-1980s under the Gendarmerie General Command. Initially, these paramilitary units were to be recruited from local Kurdish villagers to help armed forces battle the Kurdistan Workers Party (PKK), which Turkey considers a terrorist organization. For decades, security guards served in eastern and southeastern Anatolia, which are mostly Kurdish areas. Since 2018, the guards have been operating in the eastern Black Sea region as well.

Speaking on condition of strict anonymity, a retired two-star general with a decade of experience with the village guards told Al-Monitor, “Reading the memo from the Interior Ministry to the governors, one cannot help but worry. These paramilitary units have two weeks of training. All of them are armed. There is no specification in the memo, so we must ask: Is this system expanding to all of Turkey now? When the president equates a political party [the pro-Kurdish Peoples’ Democratic Party (HDP)] with 6 million voters to a terror organization [PKK], I don't see how public safety can be sustained.”

Meral Danis Bestas, a lawyer and HDP parliament member, told Al-Monitor, “The Interior Ministry announced that 7,000 security personnel will be serving in places that are potentially risky. To begin with, this memo is against the election laws of Turkey. Security forces, whose regular residences are not in these towns or cities, will be voting in the municipal elections … to elect people to govern these districts" they are patrolling.

Though the government says the massive security presence is necessary for safety, it appears to be actually designed to control election results.

"That's why for months we have been trying to document unlawful voting schemes," she said.

Those forces aren't the only concern. Bekcis, who operate under the police force, are official, armed, uniformed security guards who patrol towns, asking people for IDs — mostly in opposition neighborhoods. They act as the government's eyes.

A mukhtar from Izmir told Al-Monitor, "The age-old night guard has changed since the [July 2016] coup attempt. Traditionally, bekcis would use a whistle and maybe a baton and monitor streets at night against petty criminals. Now, armed night guards are going around in groups in non-AKP neighborhoods asking people for ID and causing trouble. On several occasions, the police have been called to restrain a violent bekci. They are not on every street — only in places where the AKP wants to increase its presence.”

Then there are two rogue elements: Members of waqf (charitable endowments under Islamic law), who are connected to AKP elites; and mafia bosses.

Videos of young men pledging allegiance to different AKP-linked waqfs are shared widely on social media platforms. In addition, militia groups that emerged after the attempted coup, such as the People’s Private Forces (HOH), have evolved into the National Mobilization Movement (MSH). They strive for the spotlight to declare their loyalty to Erdogan and the state.

The divisive language of AKP officials and Erdogan was promptly echoed by Sedat Peker, a convicted mafia boss. He emerged in Istanbul on Feb. 4 and advised his followers to "arm for the election campaign."

“[Erdogan opponents] are planning to call on their supporters to take to the streets following the elections. Their objective is to mix their supporters with members of terrorist groups and cause destruction across the country," he charged. "Our police and military are strong, but the children of this country will also come to defend the streets,” Peker said. He asked the crowd that cheered for him with Islamists slogans to acquire licensed guns, rifles or any weapons possible.

Peker has previously delivered several provocative and violent messages to the public. In a particularly gruesome 2016 statement on his website, he took aim at academics who had been accused by Turkish authorities of spreading "terrorism propaganda." He said, “We will spill your blood, and we will take a shower with your blood.” An Istanbul prosecutor indicted him for threatening academics and inciting violence. Though Peker has previous convictions on similar charges, he was acquitted in 2018 in that case.

Al-Monitor asks two questions about these militias and the mafia threat. One, who is the target? A law professor from an Istanbul university speaking on condition of anonymity said, “This time around, Peker's and other groups’ threats are not necessarily targeting the liberals or left-leaning groups; rather, their main focus is to instill fear to preempt fallout from the right-wing coalition.” Second, why are Peker and other groups not punished for their open public threats? Bestas explained that Peker "represents the spirit of the state."

"If they prosecute him, their own mindset will be on trial. So he is protected under freedom of expression," Bestas said.

On the evening of the last national election, held June 24, 2018, armed civilians fired their weapons in the centers of several towns and cities. Uniformed police officers didn't stop these "celebratory" gunshots in support of Erdogan.

One governor who asked to remain anonymous told Al-Monitor that Erdogan "fears that the public’s unconditional love and support are eroding."

He said, “Prices [of basic household items] are going up, unemployment is on the rise and Erdogan no longer has any credible promises for the public at large. He no longer campaigns for new voters. His only struggle is to keep his base [intact]. … Armed men with little training and no uniforms are ticking time bombs for public safety. They also make sure people remain scared of the state.”

Erdogan’s coalition with ultranationalists adds new groups daily to the list of enemies of the state. Paramilitary groups — whether dubiously employed by the state or tacitly supported by different groups linked to the state — are now being used as part of the election campaign. Erdogan has made it clear to the public that any sort of criticism is treason and if the opposition parties don't support him, they aren't patriotic. For now, all vocal paramilitary groups are loudly supporting the state. How long this support can be sustained and how it will be used is yet to be seen. For now, we can safely conclude that political competition — even on life support — will no longer be tolerated in Turkey.