A Tennessee businessman says US President Donald Trump introduced him to a potential Qatari investor at his Mar-a-Lago resort in spring 2018. 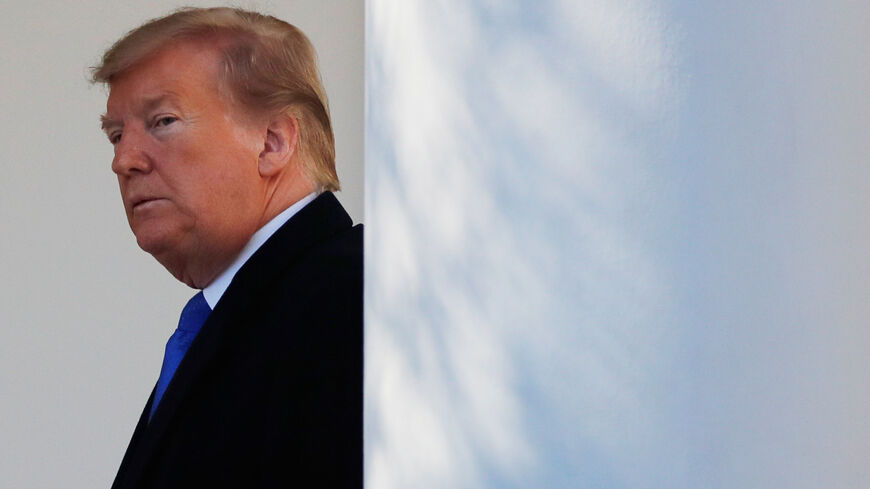 US President Donald Trump heads back to the Oval Office after declaring a national emergency at the US-Mexico border during remarks about border security in the Rose Garden of the White House in Washington, US, Feb. 15, 2019. - REUTERS/Carlos Barria

WASHINGTON — Last spring, President Donald Trump introduced a potential Qatari investor to a friend and inauguration donor seeking a few billion dollars in investment to buy an unfinished nuclear power plant in northeastern Alabama, according to interviews the donor gave to a Tennessee media outlet published this week.

Tennessee businessman Franklin Haney, 78, told the University of Memphis’ Institute for Public Service Reporting that Trump introduced him to the Qatari at Trump’s Mar-a-Lago resort in Palm Beach, Florida, of which Haney is a longtime member. He said the introduction to the Qatari, whose name he said he did not recall, came a couple weeks after he was introduced in March to Trump’s then-personal lawyer Michael Cohen, whom Haney briefly hired as a consultant.

Cohen pleaded guilty last year to lying to Congress, financial crimes and violating federal campaign finance laws related to hush money payments made to two women who alleged affairs with Trump before the 2016 US presidential election. Cohen is slated to testify next week before three congressional committees ahead of reporting for a three-year federal prison sentence in May.

“As best as Haney recalls, he and Cohen were introduced in March,” the Institute for Public Service Reporting wrote in a detailed investigative report published by the Daily Memphian on Feb. 19. “A couple weeks later, the president introduced Haney to a Qatari official whose name Haney said he doesn’t recall.”

The institute quoted Haney as saying, “He (Trump) says, ‘I know you’re working on this nuclear plant. They (the Qataris) are going to invest $45 billion (in the U.S.) and they’ll loan money for nuclear plants.’”

The Wall Street Journal previously reported that Haney, who contributed a million dollars to Trump’s Inaugural Committee through a limited liability corporation, had hired Cohen as a consultant in an effort to get Qatari investment for the Tennessee nuclear power project.

But it had not previously been reported until now that Trump himself had been directly involved in the effort.

The White House did not respond to a query from Al-Monitor about the report.

Trump’s alleged role in linking a potential Qatari investor to a reported longtime friend and donor came amid a striking shift in Trump’s public statements about the gas-rich Gulf nation, which has been the target of a Saudi-led blockade since 2017.

“It’s a great honor to have the Emir of Qatar with us. He’s a friend of mine,” Trump said in joint remarks to the press with Al Thani in the Oval Office April 10. “He’s a great gentleman. … We’re working on unity in that part of the Middle East, and I think it’s working out very well.”

“Also, we have a gentleman … who buys a lot of equipment from us,” Trump said. “A lot of purchases in the United States, and a lot of military airplanes, missiles — lots of different things. But they’ve been great friends in so many ways.”

Trump’s warm words for Qatar were a striking departure from a year earlier, when he had seemed to side with Saudi Arabia in its blockade of Qatar, launched days after Trump’s visit to the kingdom.

“So good to see the Saudi Arabia visit with the King and 50 countries already paying off,” Trump tweeted on June 6, 2017. “They said they would take a hard line on funding extremism and all reference was pointing to Qatar. Perhaps this will be the beginning of the end to horror of terrorism!”

Trump’s effusive embrace of the Qataris came shortly after a Qatari delegation had spent several days in Miami as part of a roadshow seeking to match Qatari investors and US business projects, The Wall Street Journal report said.

“On April 5, Messrs. Cohen and Haney met with the vice chairman of the Qatar Investment Authority, Sheikh Ahmed bin Jassim bin Mohamed al-Thani, to seek an investment in the plant, the people familiar with the matter said,” The Wall Street Journal reported.

“At a second reception held on April 7 in honor of the Qatari emir, Rudy Giuliani — a lawyer whose consulting firm has worked for Qatar — mingled with other business executives and investors in attendance, according to people familiar with the event,” the report continued. “Mr. Giuliani joined the president’s legal team less than two weeks later.”

The Qatari roadshow and encounters with several figures in Trump’s close orbit coincided with intensifying federal scrutiny of Cohen.

The FBI raided Cohen’s home and offices on April 9.

Haney told the Institute for Public Service Reporting in a series of interviews that he paid Cohen about $200,000 before canceling the contract to try to help secure $2 billion in Qatari investment for his plans to buy the Tennessee Valley Authority’s unfinished Bellefonte Nuclear Plant, in northeastern Alabama, and then sell power to the Memphis Light, Gas & Water Division. Haney said he ended the consulting contract with Cohen after Cohen was revealed to be under federal investigation, he told the Institute.

Haney also said Trump had no role in his decision to hire Cohen to try to pursue the Qatari investment. “I see Donald Trump every time he comes to Florida,” the Tennessee businessman told the Institute. “I don’t need him (Cohen) to introduce me to Donald Trump.’’

The more detailed accounts of consultations between Trump associates and the Qataris on possible investment in a US nuclear power project last spring comes as a new interim staff report by the House Oversight and Reform Committee raises concerns about Trump National Security Council officials having aggressively pursued a private company’s proposal to sell sensitive US nuclear technology to the Saudis.

“Multiple whistleblowers came forward to warn about efforts inside the White House to rush the transfer of highly sensitive U.S. nuclear technology to Saudi Arabia in potential violation of the Atomic Energy Act and without review by Congress as required by law — efforts that may be ongoing to this day,” the interim staff report said. “The Trump Administration’s interactions with Saudi Arabia have been shrouded in secrecy, raising significant questions about the nature of the relationship.”

The report also warned that the efforts to lobby the Trump administration to sell US nuclear technology to Saudi Arabia may be ongoing, with reported possible internal administration interest in the plan from Energy Secretary Rick Perry, senior White House adviser Jared Kushner and Trump himself. Trump met with a consortium of US nuclear energy developers and retired US Army Gen. Jack Keane, co-founder of IP3 International and a chief proponent of the plan to sell US nuclear power plants to Saudi Arabia, at the White House on Feb. 12, Bloomberg reported.

Kushner and Trump Middle East peace envoy Jason Greenblatt are slated to travel this weekend to the Middle East, in part to brief officials in six countries about the economic components of the administration’s forthcoming peace plan. “Jared Kushner and Jason Greenblatt leave this weekend for the region to build on the momentum from the Warsaw Ministerial,” a White House official, speaking not for attribution, told Al-Monitor. “There will be stops in Oman, Bahrain, UAE, Saudi Arabia, Turkey and Qatar.”