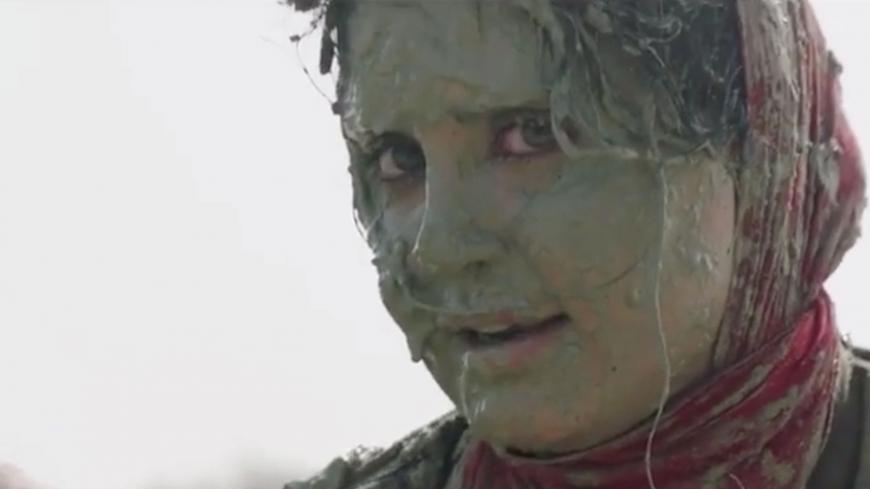 A scene from the trailer for director Narges Abyar's film "When The Moon Was Full" is seen in this video still. - YouTube/Iranian Movie Trailer

Movies about terrorism and crime raked in awards this year at the Fajr International Film Festival, the oldest cinema festival in Iran.

In a cruel twist, on Feb. 13 — a mere 48 hours after the award ceremony — 27 people were killed in a terror attack, believed to be staged by an offshoot of Jundallah, a Sunni Baluch extremist group and the subject of the festival’s top winner, “When the Moon Was Full.” Jaish al-Adl, founded in 2012 by members of Jundallah, claimed responsibility for a suicide car bomb that targeted a bus carrying members of Iran's Revolutionary Guard Corps.

“When the Moon Was Full” explores the life of Abdulhamid Rigi, the younger brother of Abdulmalek Rigi, the executed leader of Jundallah. The movie, directed by Narges Abyar, swept the awards for best director, best actor (Hootan Shakiba playing the role of Abdulhamid), best actress (Elnaz Shakerdust for the portrayal of his wife Faezeh) and best supporting actress (Fereshteh Sadr-Orafai as the mother of the Rigi brothers). The film also took the award for best film, beating its prominent rivals "6.5 for a Meter" by Saeed Roustayi and "Warden" by Nima Javidi.

Critics at the Fajr Film Festival described "When the Moon was Full" as a phenomenal film that provides a rare insight into an infamous terrorist group. The movie is based on the true story about the marriage of Abdulhamid Rigi and Faezeh Mansuri. Abdulhamid talks Faezeh into leaving Tehran for Pakistan along with her brother Shahab, but the family finds themselves captives of Jundallah. Shahab, who the group says is an Iranian agent, is beheaded. In the movie, Abdulmalek calls the father of Faezeh and Shahab to tell him to “watch the video of your son's beheading on Al-Arabiya tomorrow night." Though Faezeh has a chance to escape, she chooses to remain in Pakistan so as not to leave her three children. Finally, Abdulhamid kills her in her sleep on the orders of his elder brother.

Though the Rigi brothers were based in Pakistan, Jundallah carried out ambushes and suicide attacks in southeastern Iran's Sistan and Baluchestan province throughout the 1990s and 2000s. Abdulmalek was arrested by Iranian intelligence in 2010 to jubilation in the province, with people handing out sweets on the streets.

At the time, Iranian officials accused the United States and some Arab countries of supporting and funding Rigi. The unnamed officers who arrested him were quoted in the Iranian media as saying that the militant leader had been on his way to a meeting with Richard Holbrooke, then US special envoy for Afghanistan and Pakistan, at the Manas air base near Kyrgyzstan's capital Bishkek. While Abdulmalek was en route to Bishkek from Dubai, his plane was forced to land in Iran, leading to his arrest and eventual execution the same year.

In a Feb. 7 interview with Khabar Online, sociologist Emad Afrough stated that "When the Moon Was Full" accurately depicts the extremist Islam of the group as well as the culture of the Baluch people, a group of tribes with about five million people in the province of Baluchistan in Pakistan, in Iran and Afghanistan.

Praising Abyar for taking up such a sensitive issue, especially as a female director, producer Mahmoud Razavi posted on Instagram Feb. 13, "I remember that few years ago, I had the intention of producing a TV series about Abdulmalek Rigi. I had prepared a proposal and I gave it to a veteran and famous director of Iranian cinema. … When he came to the meeting, he said, ‘Dear Mahmoud, I love my life, they will kill me.'"

Another of the festival's controversial films was "Midday Adventures: Trace of Blood,” directed by Mohammad Hossein Mahdavian. It was nominated in 11 categories and won best special effects, best costume design and best sound mixing.

The film is the second in a trilogy by Mahdavian, following the "Midday Adventures" or “The Story of Noon,” released in 2017. The movie is about the Mujahedeen-e-Khalq organization, often referred to as MEK, and their infiltration of the Iranian security apparatus in the 1980s. US national security adviser John Bolton has promoted MEK, currently based in Albania, as an alternative to the Islamic Republic. The group, which was on the United States’ list of terrorist organizations between 1997 and 2012, is deemed responsible for the deaths of 17,000 Iranians. In the 1980s, the group was in Iraq helping Saddam Hussein during his eight-year-war against Iran.

"Midday Adventures: Trace of Blood" narrates the 1988 Mersad Operation, the last major military operation of the war that ended in a decisive victory for Iran. While the film mostly received positive reactions, some media outlets criticized the film for being "incomplete" in ignoring the role of the late Ayatollah Akbar Hashemi Rafsanjani in the victory against MEK. Producer Mahmoud Razavi is close to former conservative presidential candidate Mohammad-Bagher Ghalibaf. Mahdavian directed President Hassan Rouhani's campaign documentary in the 2017 presidential election.

Amir Homayoun Ghanizadeh, the young director of "Maskhare Baz,” won the best film award in the festival's "New Vision" section but refused to receive it. He instead sent an Afghani immigrant worker to speak out about the difficulty his countrymen are facing in Iran. But whatever social message Ghanizadeh wanted to send was lost, as he was ridiculed on the social media for copying Marlon Brando in the 1973 Oscars. Brando, who won for best actor in "The Godfather," had sent a native American activist to decline his award at the ceremony.