Prime Minister Benjamin Netanyahu has completely excluded Likud ministers from the party’s election campaign, choosing to stand alone even as he stands to be indicted for corruption. 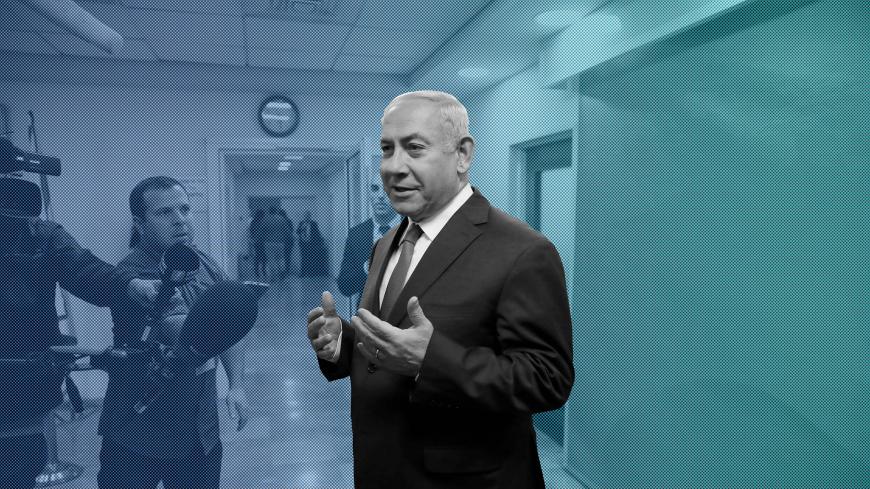 Israeli Prime Minister Benjamin Netanyahu speaks to the media at the weekly Cabinet meeting in his office, Jerusalem, Feb. 24, 2019. - Abir Sultan/Pool via REUTERS

“I’m best when I’m on my own,” Prime Minister Benjamin Netanyahu told one of the people closest to him when asked why he insisted on distancing those most loyal to him. The conversation with the person, who requested anonymity, took place about a year ago. During the 2015 election campaign, which Netanyahu practically ran by himself, senior Likud officials fretted that the man and the party were about to crash. The Likud's subsequent victory, winning an impressive 30 seats, convinced Netanyahu that the Likud is him, and he is the Likud. All the other Likud Knesset members are simply there because of him.

The 2015 victory left Netanyahu without any restraints or hindrances. Most of all, it left him feeling that he didn't owe anyone anything. In other words, he had no need to consult with senior ministers. Rather quickly, he distanced ministers once considered close to him. He suspects almost all of them of being disloyal to him, except for Yariv Levin, his minister of transportation, and he certainly does not appreciate them. This is why he stands alone today, the most crucial day of the election campaign — the day Attorney General Avichai Mandelblit announced indictments against Netanyahu on corruption charges. Whatever happens in the elections, whether the Likud wins or crashes, the result will bear Netanyahu’s name only.

Netanyahu’s behavior during the current election campaign is a direct continuation of what happened in the last one. Once again, he is leading the Likud effort all by himself. So far, there hasn’t been a single election advertisement featuring a Likud minister who is not Netanyahu. Obviously, the Likud’s campaign budget comes out of the party's coffers, but it is being used entirely for Netanyahu’s personal campaign, or more precisely, his public struggle against the indictments during the campaign.

Earlier this month, a big, expensive billboard overlooking the Ayalon Expressway featured Netanyahu, along with President Donald Trump. The slogan read, “Netanyahu is a whole different league.” Even the traditional campaign launch, in which Netanyahu brings the party’s candidates on stage, has been postponed and will not likely be held. One explanation is that Netanyahu is unwilling to shake hands with Gideon Saar, his mortal enemy and former minister. A more likely explanation is that he sees the event as a waste of precious time.

As long as Netanyahu runs an effective campaign and retains the Likud’s voter base, he doesn’t need his ministers, at least as far as he is concerned. While it is possible that he might recruit them for the campaign if he finds himself sliding down a slippery slope and plummeting in the polls, that is not the case as of now.

Likud ministers could not be found anywhere in the media over the last few days. Some of them have gone overseas, on holiday or for work, after an exhausting primary battle for a place on the party’s list. Most of them refused to be interviewed, perhaps because they had been excluded from the campaign.

Meanwhile, Netanyahu’s team is busy producing provocative videos attacking the media for allegedly trying to topple him and blaming the attorney general for succumbing to pressure from the left. In this instance, the Likud ministers are just like everyone else, only seeing the videos after they are released.

“None of Netanyahu’s people will speak to us,” said one Likud minister who requested anonymity. “We don’t interest him. They don’t even give us talking points, so we are left biding our time until the election is over, all the while hoping for the best.”

Unlike during previous election campaigns, the Likud has not even hired an advertising firm or outside consultants. Netanyahu is leading and steering the campaign and its messages, while a small team carries out his instructions for short videos. The many tens of millions of shekels designated for the campaign are being used to disseminate messages on social networks. Netanyahu’s target audience is Likud voters and supporters on the right in general. He is appealing to them to stand by his side, even after his indictment.

The campaign ran into a problem on Feb. 26, when a video crossed a red line and infuriated the families of fallen soldiers. The clip, filmed at the military cemetery on Mount Herzl in Jerusalem, features a Likud presenter against a backdrop of graves, warning against Benny Gantz, chairman of the Blue and White Party and a former military chief of staff. The narrator states, “The Israeli public has understood what a leftist government means and refuses to be guinea pigs in that experiment, which will cost hundreds of lives. … Gantz is left wing and left is dangerous.”

The clip was shown on a dedicated Likud campaign channel on Facebook after being produced in a studio at Likud headquarters on the 12th floor of the Metzudat Ze’ev building in Tel Aviv. Netanyahu is interviewed there from time to time by the in-house interviewer and media figure Eliraz Sadeh. In fact, it is the only place he gives interviews.

The Likud was quick to declare the video an unfortunate mistake, and even Netanyahu acted to minimize the damage. Before boarding a plane to Moscow for a meeting with Russian President Vladimir Putin, he said that he was shocked by the video. He said, “As soon as I was told, … I ordered the removal of the image. … As a bereaved brother [of a fallen soldier], … I understand well the pain of the families.”

The thing is that Netanyahu is the only person responsible for this campaign, for its messages and its style. Even if, as he claimed, he was unaware of this particular video, he still bears responsibility for it. He didn’t actually apologize.

One person who understands how Netanyahu plays with fire is political strategist Eyal Arad, a close adviser to Netanyahu at the start of his political career. Arad tweeted, “Netanyahu’s cemetery video is a complete abomination, but it is effective. It targets just 5 or 6 seats among Likud voters, who might otherwise leave because of the indictments. It is intended to scare them, so they don’t switch to the ‘left.’ The great exposure it received from everyone who was horrified by it actually serves the campaign. The mystery is where are all the opposition’s campaigns? Does anyone besides Netanyahu want to win?”

Netanyahu boarded the plane to meet Putin, but the “cemetery” video opened all the newscasts and current affairs programs that evening. The Likud maintained radio silence, as expected. Saar was the only person to mention the video, calling it a serious error in judgment and a “slap in the face of the Likud’s values.” He would not of course directly attack Netanyahu.

Even over the coming days after the announcement by Mandelblit that he will indict Netanyahu subject to a court hearing, senior members of the Likud will surely maintain a unified front. They will either keep silent or speak out in his defense. As noted, Likud ministers are not part of the campaign. No one is consulting them. They are little more than statistics in Netanyahu’s public, political and media war for his seat and perhaps his freedom.