Iraq's recent agreement to exchange Iraqi discounted oil with imported goods from Jordan free of customs fees has stirred the outrage of Iraqis. 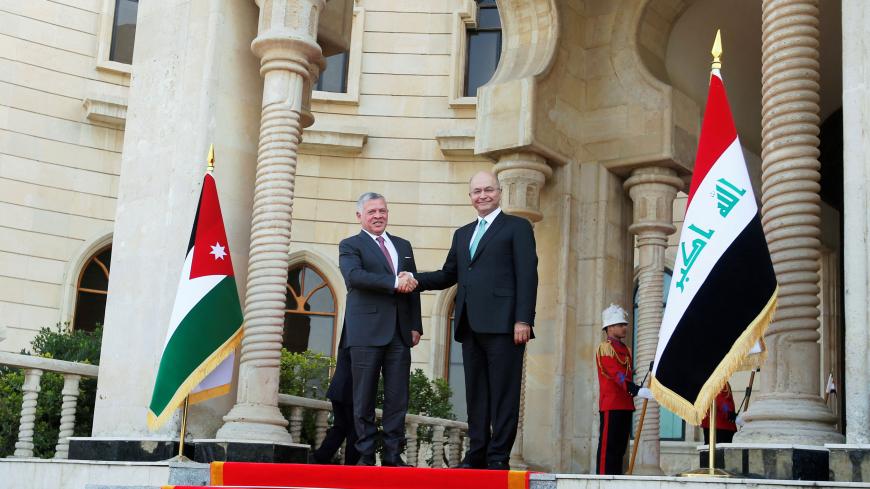 Iraqi Prime Minister Adel Abdul Mahdi and his Jordanian counterpart, Omar al-Razza, signed 14 economic agreements Feb. 2 between the two countries, during their meetings on the Iraqi-Jordan border, where a joint industrial city will be established.

The agreements include the transport, trade, health, agriculture, finance and energy sectors.

The recent economic agreements between the Iraqi and Jordanian governments have raised controversy in Iraq, as some Iraqi political and economic institutions believe these understandings favor Jordan and harm Iraq. The Asaib Ahl al-Haq (League of the Righteous), headed by Qais Khazali, said “the Iraqi citizens will pay the tax of these agreements.”

As with most other issues in Iraq, these agreements divided Iraqi political camps into two. One was welcoming, and the other denounced the agreements as having no economic feasibility for Iraq — especially those related to extending a pipeline from Iraq’s oil-rich government of Basra to Aqaba.

The leader of the National Coalition, former Iraqi Prime Minister Ayad Allawi, described the agreements as “good” — he was supported by a group of Sunni politicians who also praised them.

Despite the rejection and comments by Iraqi politicians and parliamentarians on the agreements, Abdul Mahdi, however, stated that the “agreement with Jordan has great economic returns, which opens the door to provide job opportunities.”

The Iraqi objection to the agreement is based on the fact that it came at a time when Jordan is suffering from financial indebtedness and a high unemployment rate at 18%, in addition to the large public objection to some of the tax laws there. Therefore, some parliament members believe that the agreement would save Jordan and not benefit Iraq.

Iraqi parliament member Sadiq al-Sulaiti believes that “Jordan wants to reap the fruits of these agreements without having to pay anything in return.”

For his part, parliament member Jasem Moha said, “The agreements, signed by Iraq and Jordan, came at a time when Jordan is suffering from a major economic recession. It seems that the agreement was signed at the request of the US to support Amman.”

According to the agreement on the transport sector, Jordan will exempt Iraqi goods imported through the port of Aqaba by 75% of the fees that are charged there.

In the energy sector, Iraq will supply Jordan with 10,000 barrels of oil per day from the fields of Kirkuk at discounted transport costs.

In the trade sector, Iraq exempted 371 Jordanian goods from customs duties. In return, Jordan gave priority to Iraqi goods entering its territory at a time when Jordan’s production of such goods is limited.

With these agreements, Iraq has opened a new channel to export its oil, but at the same time, it's selling it at a price lower than the world price, further fueling the competition of the imported goods against the local ones. Some owners of factories and plants in Iraq believe that this is a blow to the country’s interests.

The owner of a paint factory selling products across Iraq told Al-Monitor on condition of anonymity, “I had to open a plant in Jordan to supply my factories in Iraq with raw materials, which are exempt from any taxes.”

He added, however, that “the government is now fighting the local products with these agreements. The Iraqi factories will go downhill, and people prefer imported goods that come with fewer costs than the local goods. The local goods face fierce competition from Jordanian merchandise and other goods.”

Iraqi Oil Minister Thamir al-Ghadban is trying to protect the government of Abdul Mahdi from the attacks and scathing comments on the agreements with Jordan. Speaking of the agreement on the energy sector, he said, “This agreement [has been] signed between Iraq and Jordan since 2006. Iraq sells Jordan oil for $16 less than the international Brent [oil prices]. The deal is not new.”

Head of the Iraqi Industries Federation Ali Sabeeh al-Saadi said in a press statement Feb. 2 that “the trade agreement offers no benefits to Iraq. How would it be possible to exempt 90% of the Chinese goods whose labels are changed in Jordan? The ports of Basra will stop working because all goods will enter through Aqaba, and this harms the Iraqi economy.”

Iraqi economists and businessmen believe the agreements with Jordan are “necessary and important,” stressing that Iraq “ought not to stay a market for Iranian goods but to different merchandise too so they can compete against the Iranian products that have flooded the Iraqi markets.”

“The attack on the Iraqi-Jordanian agreements is understandable if we look at the situation from a political point of view. But eventually, these deals are beneficial for both countries,” Yusuf Ibrahim, a Jordanian researcher in Iraqi affairs working for the Friedrich Ebert Foundation, told Al-Monitor.

“These agreements are strategic, especially from the geopolitical point of view, in terms of good relations between the two countries. The agreements also give economic solutions to Iraq to sell its oil, especially in light of the US-Iranian conflict in Baghdad,” he added.

As per the oil agreement, Iraq would supply Jordan with 7% of its oil need with preferential prices, while some Iraqis believe this will not come out in their favor and believe Jordan is dealing with Iraqis “selectively.”

The agreements the government signed will face objection in parliament as many blocs, including the Fatah and Sairoon alliances, are likely to veto them, which means they won’t be passed easily.