Iraq bulks up border presence as IS escapees try to enter

Iraqi forces have sent reinforcements to the border area and are engaging in nightly artillery strikes on IS positions in eastern Syria ahead of an expected US pullout in the near future. 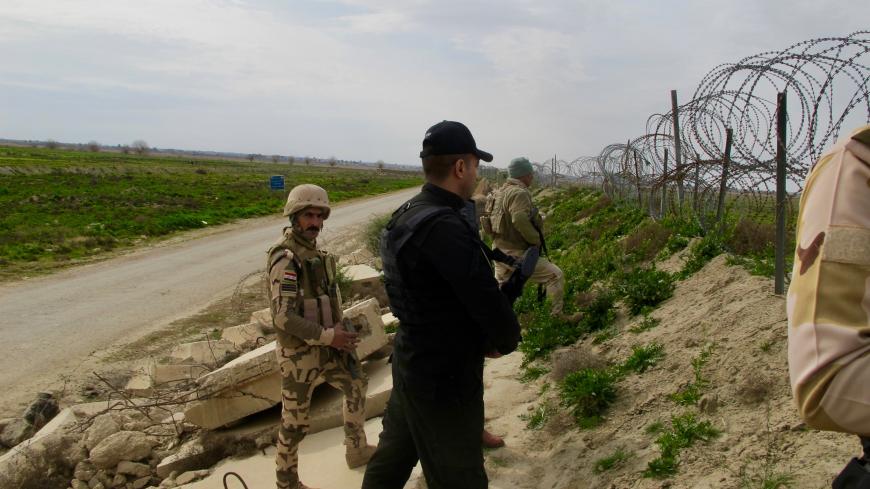 As the battle for a few square miles of Islamic State (IS) territory left on the Syrian side of Baghouz continues, Iraqi security forces have stepped up their border presence to prevent infiltration.

Attempts to seal the border have taken on critical importance after reports that the United States plans to pull its troops out of eastern Syria by April.

During a visit to the border on Feb. 7, an officer from the Iraqi army’s 8th division who asked to be identified as Maj. Ibrahim told Al-Monitor that about 10 airstrikes from the international anti-IS coalition had been conducted over the past 24 hours.

IS fighters “are trying to cross this border,” he said, “but we are hitting back at them and the Syrian Democratic Forces [SDF] are doing the same on the other side.”

“We have thermal cameras,” the officer added, “and we are targeting them every night with artillery between around 9 p.m. and 3 a.m.”

The Euphrates River and its fertile banks snake through the area, watched over by the Iraqi military, non-local Popular Mobilization Units and border guard commandos, including from a sandy, yellowish cliff on the Iraqi side serving as a vantage point.

Below, the winding roads of the Iraqi side lead through Iraqi Baghouz, administratively part of Qaim but north of the Euphrates and reached by crossing the sole bridge left viable during the fight against IS, then used for operations to retake parts of western Anbar in late 2017.

Expectations are that the international terrorist group is likely to lose the territory it holds on the Syrian side within the coming days or weeks at the most.

As of mid-February, however, IS was putting up stiff resistance despite the thousands of civilians — and possibly fighters claiming to be civilians — who have fled the besieged pocket in recent days.

Reports say many of the civilians who were trapped in the besieged area were originally from western Anbar. Security officers in Qaim showed Al-Monitor photos of alleged IS fighters from the area who tried to pose as civilians but were detained by the SDF after Iraqis from this area helped to identify them.

The risk is that if they manage to slip through and cross back into Iraq, the fighters may contact sleeper cells still present in the country and pave the way for the terrorist organization to regroup.

The US-backed and Kurdish-led SDF had at one point in previous months held the area immediately across the border but then lost it again to IS. Al-Monitor visited it in previous months when SDF flags were visible from the border. When Kurdish-led forces had retreated in order to send more of their fighters to other areas of conflict in Syria, it was temporarily denied access to the area.

Many of the SDF fighters on the other side are reportedly now local Arab youths who joined the Kurdish-led group to fight for their home territory.

The sharp increase in Iraqi forces on this side of the border during the Feb. 7 visit was clear.

Mortar and artillery positions now line what was previously used as farmland for local inhabitants whose sheep, cows and chickens watch warily as armored vehicles and men in desert sand uniforms ply the narrow road. Children wave energetically and play on the roads.

Between the farmland and the bridge back to Qaim, homes being repaired by their inhabitants stand next to ones still empty. Others are charred and have “IS home” graffitied on them. A few mosques are near the road, one of which is piled high with army green sandbags and used as a base for security forces manning an adjacent checkpoint.

At the regional level, Anbar province meanwhile seems to be preparing for police to take over responsibility for local security in areas where an often-confusing variety of military forces are for the moment still present.

Lt. Gen. Hadi al-Rzayej Kasr, head of the Anbar governorate police force, told Al-Monitor in an interview in his office on the Habaniyah base Feb. 5 that several police stations were being reopened across the province in this period as part of an agreement between the joint operations command and the Interior Ministry.

The first major city that IS took in Iraq was Fallujah in January 2014, while Mosul was taken in June 2014. It was only after more than three years of fighting that the country declared victory against IS in December 2017.

The first stage of reopening police stations, said Kasr, will include one in the former flashpoint town of Karma (Garma) in eastern Anbar.

Kasr said that in the week that follows the first stage, others would be reopened in western Anbar at the Waleed border crossing on the Jordanian border, in Heet and in the Rumana district near the Syrian border. Rumana is a largely desert area except for a fertile stretch along the Euphrates River just east of Baghouz.

Kasr noted, however, that “Anbar is such a wide area” encompassing almost a third of all Iraqi territory, adding, “We do not have enough men to cover it” at the moment.

Many men left their positions or were fired in the intervening years of conflict. IS also targeted members of security forces, and many are still missing.

While the border north of the Euphrates seems to be heavily guarded by border police and the Iraqi army, this is not the case south of it between Qaim and Rutba.

Several sources in Qaim told Al-Monitor that there is significant movement by IS through that part of the border and the vast desert around it.

But Kasr noted that these were only rumors.

“There is no proof” that there are substantial numbers of IS fighters and commanders crossing into Iraq through that area, he said.

Nevertheless, with the thousands fleeing the last IS stronghold only a few miles to the other side of the border and wide desert expanses, it is very likely that many will try.