Many civilians and local security forces have been kidnapped or killed in recent weeks while looking for white truffles, mostly in desert and mountainous areas of Sunni-dominant provinces. 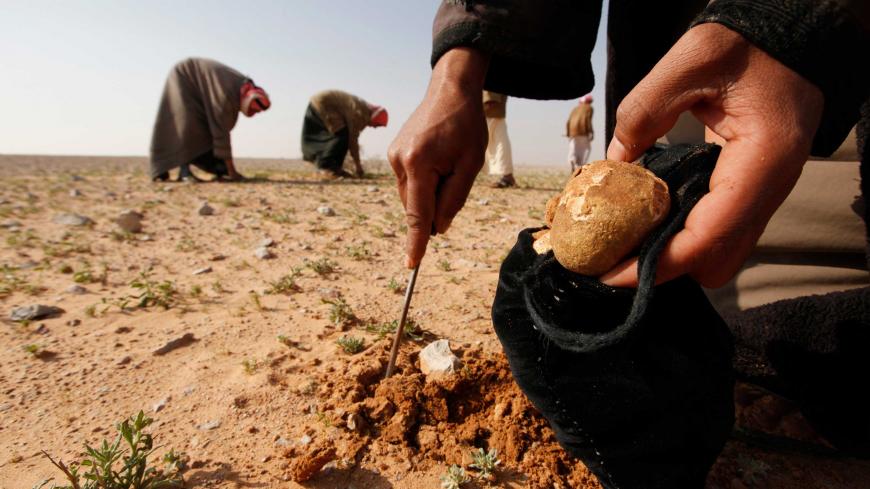 QAIM, Iraq — Across the rocky and grass-speckled desert of western Anbar, it is white truffle season. Locals can be seen scanning the ground in search of truffles, along the road that stretches from Haditha to Qaim and then the Syrian border. Yet, in recent weeks, a rash of kidnappings and killings of truffle hunters has marred this seasonal tradition and raised concerns of Islamic State (IS) sleeper cells.

On Feb. 18, 12 men from Anbar, Karbala and Najaf were kidnapped while picking truffles in the al-Nukhaib district of southern Anbar province. The next day, six bodies were reportedly found in same area, which is close to the Iraqi border with Saudi Arabia.

Salahuddin province has also seen truffle hunters kidnapped or killed. Earlier this month, three brothers were kidnapped in the Makhoul Mountains. They were found dead, handcuffed and with bullet wounds, Feb. 8.

The Makhoul and adjacent Hamrin Mountains, which divide the northern Salahuddin province from southern Kirkuk, have long been a hiding place for insurgents, even before IS, as has the vast desert of Anbar.

Anbar province, which borders Salahuddin, accounts for about a third of Iraqi territory but is sparsely populated outside the Euphrates River Valley.

IS has claimed responsibility for many of these incidents.

A security source in western Anbar told Al-Monitor Feb. 16 that several people, including some of his friends, had been kidnapped near Rawa the previous day while looking for truffles.

The family of one of the kidnapped men had received a ransom demand of $30,000, which was later lowered to $20,000, according to the source. He speculated that the kidnappings could have been orchestrated by criminal gangs using IS as a cover.

Security forces have since managed to free some of the kidnapped men, who said that IS perpetrated the act. Though questions remain as to the true identities of the kidnappers.

Kidnapping for ransom has long been a problem in Iraq. Also common are individuals posing as members of security forces or terrorist groups. This makes the local population feel insecure, and like the security forces are not providing them with enough protection. Making populations feel as if they cannot venture out of a severely circumscribed area is a terror tactic, however — one that IS seems to be making greater use of in its return to guerrilla tactics.

In early February, Al-Monitor spoke to the mother and brothers of Mohammed al-Jughayfa, who was killed by IS in late January while searching for truffles near Haditha.

The Jughayfa tribe is known for its staunch resistance to IS, which enabled Haditha to withstand a siege of over a year and never be taken by IS.

Mohammed al-Jughayfa was a member of the emergency police brigades. On the day he was killed, he was with two men, one a civilian and the other a fighter with the Popular Mobilization Units (PMU). The civilian disappeared, while the PMU member was also killed.

Security sources in the town told Al-Monitor Feb. 6 that the man who disappeared was also from the Jughayfa tribe, but that he “may have had links with terrorist groups” and “we are looking into this possibility.”

On Feb. 20, security forces, along with fighters from Haditha and the Jughayfa tribe, went to the desert in search of the kidnapped men. A clash ensued after they came upon an IS vehicle, according to Hussein Zibin al-Jughayfa, a member of the emergency police brigade, and then "five IS [members] were killed and two of our forces were injured.”

IS is "targeting locals that fought against" it in this Sunni-majority province, Col. Moussa Hamad al-Karbouly, commander of a local PMU, told Al-Monitor on Feb. 8. He said that IS is not “targeting the army,” opting instead to target civilians, local police officers and the PMU.

The Army’s 8th division is stationed along the Iraqi-Syrian border, but its members are mostly from central and southern Iraq, and thus not local Sunnis who IS could find it more expedient to intimidate.

Those who have returned to western Anbar after its liberation from IS in late 2017 say that security is good but that services, especially the lack of electricity, are still a major problem.

A US military official told CNN Feb. 18 that more than 1,000 IS fighters may have fled from Syria into western Iraq over the past six months.

If kidnappings and killings continue, more Iraqis could leave the area, potentially paving the way for insurgent groups to gain a foothold — or intimidate — those who remain.