Iran’s Foreign Minister Mohammad Javad Zarif made a splash on social media with his defense of his country’s missile program and other policies at the Munich Security Conference. 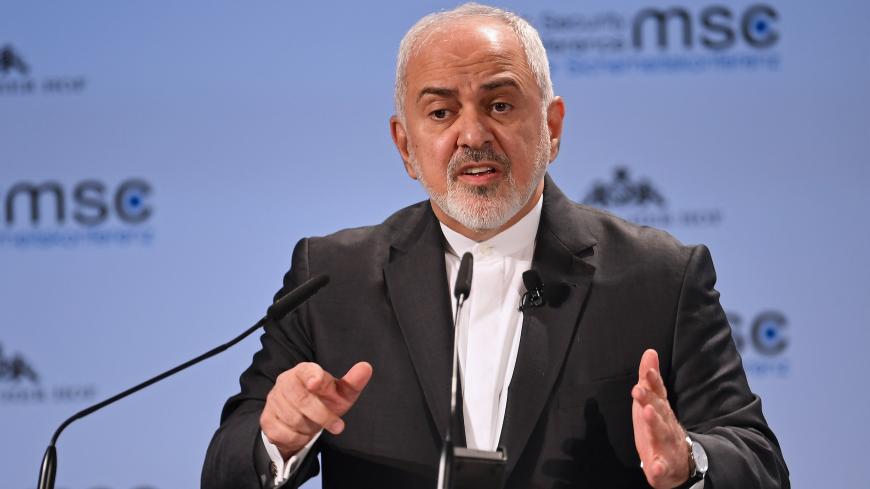 At the annual Munich Security Conference, Iran’s Foreign Minister Mohammad Javad Zarif drew praise on Iranian social media for his combative style and approach during his 14-minute speech and longer question-and-answer segment with a BBC journalist.

Zarif accused the United States of having an “obsession” with Iran for 40 years. He added, “In the past two years the US has taken its animus towards Iran to a new extreme” by rejecting the Joint Comprehensive Plan of Action (JCPOA) and attempting to force others to violate the nuclear deal. He said that Vice President Mike Pence, who spoke the day before him at the Munich conference, “arrogantly demanded” that Europe jeopardize its own security and leave the deal.

Continuing on America’s “malign obsession,” Zarif said that the United States is “imposing costs” on other countries, particularly in the Middle East. Zarif accused the United States and indirectly Saudi Arabia of fomenting instability in the region “all in the name of containing Iran,” particularly via the bombing of Yemen, aiding and abetting the war in Syria and kidnapping Lebanon’s Prime Minister Saad Harriri. In response to accusations that Iran interferes in the region, Zarif said that the United States has bases all around Iran’s borders and floods the region with US arms.

Discussing Europe’s inability to establish a functioning Special Purpose Vehicle that would keep the JCPOA alive, Zarif said, “Iran cannot foot the entire bill for vital global security achievements.” Zarif said that Europeans and others “speak eloquently on multilateralism but they also need to walk the walk.” He continued, “Europe needs to be willing to get wet if it wants to swim against the dangerous tide of US unilateralism.”

When asked about Iranian missiles and the possibility of new European sanctions, Zarif began with a smile, “Let me ask you a question. … Does Iran have to simply lie dead because some people don’t want us to be able to defend ourselves?" He asked, "How are we supposed to defend ourselves? When we were attacked by French Exocet missiles, by German chemical weapons, by Russian MIG fighters, by British tanks, by American AWACS surveillance, who came to our assistance? … When our people were being showered with missiles, with Iraqi missiles, nobody gave us a means of defense.”

In what was probably the most shared video on Twitter, where one user called Zarif “a soldier of Iran,” the chief diplomat said, “Now I am not going — for the pleasure of my friend [French Foreign] Minister [Jean-Yves] Le Drian or anybody else — to make our people defenseless so that the next Saddam Hussein in our region can rise up and kill our people without the means of our defense. We still have people who cannot breathe in Iran because of the chemical weapons that were provided to Iraq from Europe. … If we were to to negotiate about armaments, Europe has a lot to respond to.”

Mahdi Mohammadi, a hard-line former media adviser to ex-nuclear negotiator Saeed Jalili, tweeted, “I enjoyed Zarif’s comments at the Munich conference in defense of the missile program.” However, he added that Zarif’s defense was more words than action. Interestingly, others commented that had Jalili made such a strong showing on an international stage, then the conservative-dominated state television would have broadcast the entire speech and question-and-answer session. It was aired in the middle of a news program and with the less important news.

Zarif also said that US and European concern for human rights is a “charade,” especially considering that the murder of Saudi journalist Jamal Khashoggi did not interrupt Saudi Arabia’s relations with Western countries. Commentary on this double standard was particularly popular on social media.

On US intentions, Zarif said, “I think the United States administration is not doing anything but regime change.” He also accused Israel of looking for war.