To cover the budget deficit, Iran’s lawmakers are seeking to force the central bank to print money. If they are successful, they will likely end up making life more difficult for average Iranians. 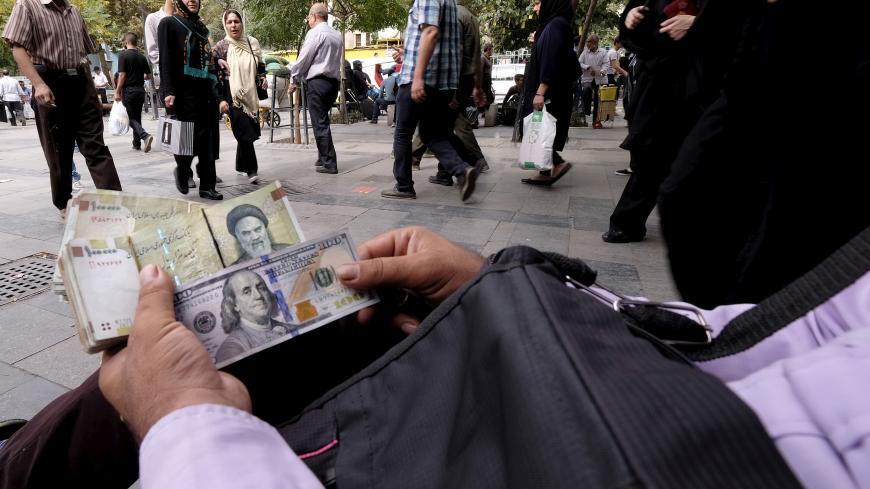 A money changer displays US and Iranian banknotes at the Grand Bazaar in central Tehran, Iran, Oct. 7, 2015. - REUTERS/Raheb Homavandi/TIMA/File Photo

A disagreement between the Central Bank of Iran and factions of the government, backed by lawmakers, over profits from foreign exchange sales has now taken the form of a pending amendment to the country’s annual budget law. If passed by the Guardian Council, the amendment — which calls on the central bank to pay a significant sum to the government as tax – will increase money supply and exacerbate inflation. It could also negatively impact foreign exchange rates, ultimately hurting average Iranians the most.

Roughly a year ago, when drafting the annual budget law for the running Iranian fiscal year, which will end March 20, the rate of the US dollar was set at 35,000 rials. It drew fire from pundits, who said the rate had once again been unrealistically set. That proved true, especially since the government moved to “unify” the country’s dual foreign exchange rates and tried to fix the rate of the rial against the dollar at 42,000 rials.

But the currency crisis that formed on the back of returning US sanctions, after US President Donald Trump unilaterally withdrew from the Iranian nuclear deal, devalued the rial far more. After President Hassan Rouhani and Trump had a showdown at the United National General Assembly in late September, the rial hit an all-time low of 190,000 rials to the greenback.

That prompted many conspiracy theories, including one that the Rouhani administration orchestrated the devaluation to profit from arbitrage, since the main source of its revenues is in hard currency while its liabilities are mainly in rials.

In the initial budget draft, due to the expected difference between rates set in the budget law and open market rates, the government had predicted about 100 trillion rials ($2.38 billion) in currency revaluation profits from oil sales to be extracted from the central bank in the form of monthly taxes. Members of parliament took this out of the budget draft due to ambiguities, and the fact that the central bank would need to first assess its performance by yearend to pay up.

Fast forward a year and a hefty government resource crunch later, and the tax proposal has come back to bite the central bank again. On Feb. 3, parliamentarians ratified an amendment to the annual budget law that legally binds the central bank to immediately wire 50% of its currency revaluation profits to the government treasury as taxes. The amendment is seemingly the product of lobbying by factions of the government, specifically the Management and Planning Organization, as a cash-hungry government faces the prospect of public demand for goods and services in the run-up to the Iranian New Year holidays next month.

But in trying to keep face and provide for public needs, the government and parliament will be effectively strong-arming the central bank into exacerbating an inflation rate that some estimates put at higher than 40%. That will make life more difficult for many more middle- and lower-class Iranians.

In order for the central bank to pay that amount to the treasury, it would have to print a significant sum of “strong money.” That, he said, would increase the monetary base by 6-7% by yearend. This is of note, as taming the rampant money supply — which steadily grew by an alarming 30% annual rate for a decade, until about two years ago, and is still rising by 21% yearly — is a major government focus. Total liquidity stood at a whopping 17.252 quadrillion rials ($411 billion), according to the latest central bank report for the eighth Iranian month (running Oct. 23-Nov. 21, 2018).

Estimates say suddenly printing the sum envisioned in the budget amendment could push up inflation by another 5%. That would only fuel fears of hyperinflation, which officials have emphatically tried to quell in recent months.

“This plan is unprecedented globally and runs counter to economic and accounting fundamentals,” economist Sadegh Alhosseini said. “If we are running a budget deficit, the way forward is not to destroy the whole economy.”

On the other hand, if the Guardian Council approves the measure, the money printing will come roughly at the same time as another significant source of liquidity may be injected into markets. Starting Feb. 17, 2018, when foreign exchange rates had just started stabilizing meaningfully, the central bank allowed all banks to offer one-year certificates of deposit with 20% interest rates — going well beyond the legal 15% ceiling and the 18% that most banks were offering at the time — in a bid to prevent flow of money toward currency speculation. Officials said banks absorbed a massive 2.4 quadrillion rials ($57 billion) worth of deposits in the duration of the scheme. Those deposit contracts are now nearing their end.

Together with the bank deposits, the new money supply pump caused by the amendment could go toward the currency market, further weakening the rial at a critical juncture. INSTEX, Europe’s special purpose vehicle to sustain trade with Iran and its main practical effort to date to keep the embattled multilateral Iran nuclear deal alive, slightly strengthened the rial when it was unveiled last week. But the rial now changes hands for about 130,000 rials to the greenback, above what it did before the European announcement. All eyes are now on Iran’s action plan with the Financial Action Task Force, the global anti-money laundering and combating financing of terrorism watchdog. Surely, a fresh liquidity dump won’t help the rial’s fortunes in the open market at this sensitive time.

For now, apparently lacking the independence it desperately needs, Hemmati’s central bank seems to be fending off the pressure. In a Feb. 4 statement, the regulator pointed out that the battle is not yet over since a Guardian Council vote of confidence is required. It also stressed that any potential payments will be postponed until after foreign currency sales profits are realized, since it has a strong aversion toward needless money printing. Lastly, it said the central bank will move to inject more currency into markets in coming days. This could mean the central bank will pump foreign currencies at high rates close to open market rates in a bid to generate more revenue. If that proves to be true, it could also contribute to further devaluation of the rial, albeit gradually.