The announcement by Vermont Sen. Bernie Sanders that he will again run for US president is already triggering a heated debate in Iran over the future of Tehran-Washington ties. 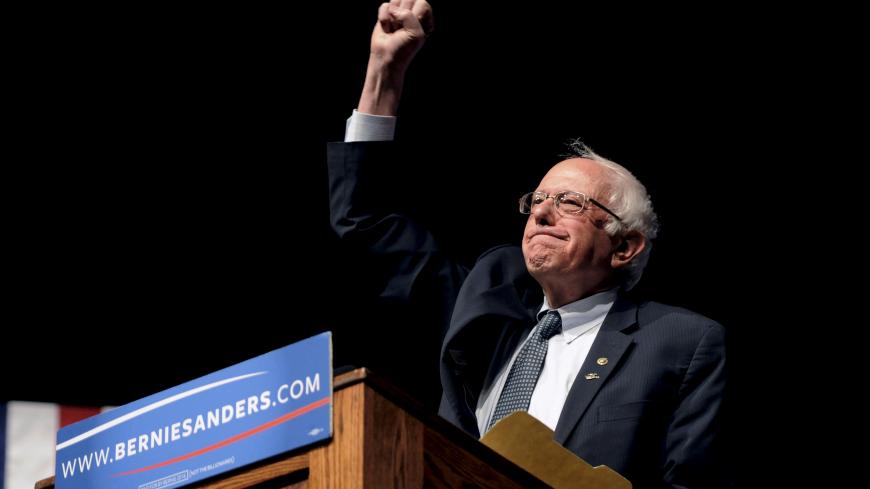 Democratic US presidential candidate Bernie Sanders pumps his fist after announcing he won the Wisconsin primary at a campaign rally at the University of Wyoming in Laramie, Wyoming, April 5, 2016. - REUTERS/Mark Kauzlarich

"A social Democrat pursuing political revolution in the United States," wrote Iran’s official IRNA news agency of Vermont Sen. Bernie Sanders after he launched his campaign for the Democratic Party's nomination in the 2020 presidential race for the White House.

Sanders introduced his fight as one about "creating a government based on the principles of economic, social, racial and environmental justice." Based on that agenda, “Sanders has come forth with 'revolution' as his slogan," reported leading Iranian business daily Donya-e Eqtesad. According to the daily, what Sanders enjoys more than other US presidential candidates is massive support on social media.

Seemingly trying to hide excitement about Sanders' announcement, Jahan Sanat, a conservative paper with regularly biting headlines against President Hassan Rouhani's moderate government, referred to Sanders as the "leftist Democrat." But the term notably has little negative connotation in the Islamic Republic, whose ideology shares a lot with left-wing movements opposed to US global influence. "Sanders launched his campaign right at a time when the US president [Donald Trump] undermined his Venezuelan counterpart's socialist ideology as a dead one with no more relevance in the Americas," wrote Khorasan, as it introduced Sanders as a progressive politician.

What perhaps made Sanders a more attractive choice for coverage was his decision to name Faiz Shakir as his campaign manager. Shakir is a Muslim civil rights lawyer of Pakistani origin. Meanwhile, the outlets — which gave little room to Sanders — still found some space for Trump and how he is being squeezed by 16 states with a lawsuit against his emergency declaration over the controversial plan to build a wall on the border with Mexico. "Disunited States," wrote pro-government Iran in a catchy title to suggest a split that America is grappling with due to Trump's perceived divisive policies.

While closely monitoring political developments in the United States, the Islamic Republic's official line toward American presidential elections has long been one of indifference. This is, nevertheless, not shared by many among the elites and the public who find it decisive who makes it to the Oval Office.

"Instead of pushing for a bunch of worthless Reformists in our country, a better idea would be for us to garner votes for Sanders from among Americans, because the impact their votes [in the 2016 US presidential elections] left on our fate was much bigger than our own," one person tweeted.

Some argued that the Islamic Republic is not that indifferent toward US elections and that a potential Sanders victory is good news for Iranian officials who "will do their best to survive the two remaining years of domestic discontent and foreign sanctions before Sanders gives them a sigh of relief." The same message was conveyed by an Iranian-American journalist who used a positive tone and focused on the bright side: "Sanders' foreign policy, particularly with regard to the Middle East and Iran, is the opposite of that of the current US administration. If he wins, it is expected that he will move toward interaction with Iran." But this idea was brought under question by another Twitter user who insisted that if he takes office, Sanders "will be the president of the United States after all, and the US [politics] has a determined definition [of Iran]."

That "cut-from-the-same-cloth" approach toward US Democrats and Republicans is reiterated by Iranian officials when rivalries for the White House heat up once every four years. In 2015, however, Iranian diplomats sat down with American counterparts from former US President Barack Obama's Democratic administration. The intense talks saw the two sides along with the European Union, France, Britain, Germany, China and Russia ink the Joint Comprehensive Plan of Action meant to end a yearslong standoff with Tehran over its nuclear program. Obama's successor, representing the US Republicans, pulled his country out of the deal less than three years later, reimposing tough sanctions.