Human rights the elephant in the room at Arab-EU summit

The first summit of European Union and Arab League leaders exposed existing rifts between the Middle East and Europe, in particular on the human rights front. 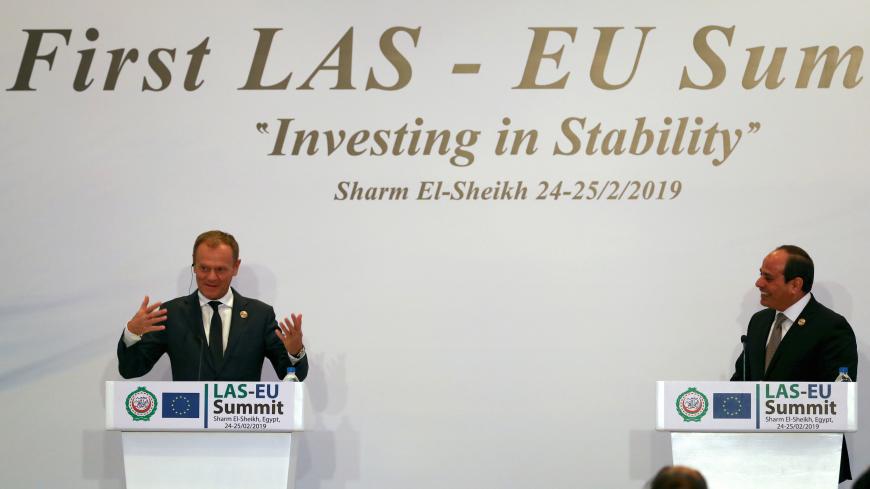 When leaders from the European Union and the Arab League met in Sharm el-Sheikh for their first summit Feb. 24-25, the aim was to "boost cooperation" and "find common ground" on shared challenges in their regions. The issues of terrorism and migration dominated the gathering, convened under the banner “Investing in Stability.” Despite officials hailing the talks as a "new step in EU-Arab relations," no formal agreements were reached, a perhaps not unexpected result given the divisions within both camps and differences between the two blocs on human rights.

The summit was mired in tensions from the onset, with Europe divided over migration and several Arab countries embroiled in an ongoing dispute with Qatar. At a preparatory meeting in Brussels before the summit, Hungary had threatened to block the EU's proposed final declaration, because it opposes cooperating with North African states on migration. Hungary has closed its borders to Middle Eastern and African refugees fleeing conflicts at home, declaring them "economic migrants seeking better lives" and a threat to Hungary and all of Europe. Meanwhile, the rift with Qatar dates back to summer 2017, when Saudi Arabia, Bahrain, the United Arab Emirates and Egypt severed ties with the Gulf state, alleging that it supports terrorism and is destabilizing the region.

Adding to summit tensions was the October murder of Washington Post columnist Jamal Khashoggi inside the Saudi Consulate in Istanbul, allegedly on the order of Saudi officials. Western leaders have since largely snubbed Mohammed bin Salman, Saudi Arabia's crown prince and de facto ruler. To the European delegates' relief, his father, King Salman, represented the kingdom at the summit.

Hossam Zaki, assistant secretary general of the Arab League, brushed off criticisms of the summit as "ceremonial" and "insignificant" in light of the lack of tangible results save the meeting having actually taken place. "The fact that the summit was held was in itself a success," he told Al-Monitor. "To offer all those leaders the opportunity to talk to each other increases the chances of understanding. That in itself is an achievement for a first gathering of its kind."

The ''landmark" meeting followed on the heels of Egypt's execution of nine people convicted for the 2015 murder of the prosecutor Hisham Barakat following what Amnesty International denounced as "grossly unfair trials." Six other men were hanged earlier in month for the 2014 killing of a judge's son and the murder of a police officer in 2013, raising concerns among rights groups over Egypt's surge in the use of the death penalty.

According to the UN Office for Human Rights, the defendants in all the cases had informed the court that their confessions had been obtained by torture. Human Rights Watch, in its 2019 Global Report, accused Egyptian police of systematically using torture, arbitrary arrests and forced disappearances to silence political dissent. Thousands of civilians were tried by military courts, it said, calling the situation the worst human rights crisis in Egypt in decades.

The EU-Arab League gathering also fell in the wake of the Egyptian parliament approving controversial constitutional amendments that would allow President Abdel Fattah al-Sisi to extend his tenure beyond 2022, when his current term in office expires. Yet Egypt's poor human rights record was the elephant in the room at the summit even though the EU officials in attendance had clearly chosen to prioritize security over human rights, despite claims to the contrary, by obtaining Sisi's ongoing support in curbing migration. This is perhaps not so surprising considering the widespread anti-immigrant sentiment in Europe.

The choice of Egypt as a venue for the historic meeting was clearly in appreciation of Egypt having largely stemmed the tide of illegal migrant flows from its shores en route to southern Europe. There has been no record of such illegal crossings since 2016, due to to heightened security and passage of an anti-human trafficking and migration law targeting smugglers. Critics argue, however, that the root causes of migration — including poverty and unemployment — have yet to be addressed. They also warn that in forsaking human rights, Europe is in fact undermining its security rather than preserving it.

"EU leaders are right to engage with neighbors on common challenges but must not capitulate on important issues like human rights," Shada Islam, director for Europe and geopolitics at the European think tank Friends of Europe, told Al-Monitor. "The EU's silence on Egypt's human rights record is a tragic reflection of how fears of migration are driving European foreign policy."

Islam further stated, "This is unfortunate in the long term. Stability and prosperity in Europe's neighborhood depends on respect for key values. That means listening to the voices and priorities of the region's people — women, young people, business leaders — not pandering to despots and dictators."

Rights advocates have also warned that global indifference on the dismal human rights situation in the Arab region is "empowering dictators" and "fueling the repression." Jean-Claude Juncker, head of the European Commission, denied that the EU had purposely ignored human rights at the summit, insisting that the issue had been raised in bilateral meetings. Still, the aspirations of the region's people could not have been farther from the minds of the Europeans, who seemed to prioritize Brexit over other matters, with discussions on the sidelines about possibly postponing the United Kingdom's withdrawal from the union.

An exchange between Sisi and European Council President Donald Tusk on the final day brought underlying tensions to the surface and produced what is likely the most memorable moment of the summit. A manifestation of the frustration and deep sensitivities harbored by both parties, Sisi's outburst and Tusk's response to it, were particularly telling.

"You are not going to lecture us about humanity. You must respect our values and ethics," Sisi said in response to a reporter's question on Egypt's poor human rights record.

"The priority for European nations is to give people prosperity. Our priority here is to safeguard our nations and prevent them from collapsing," he added, followed by a burst of applause from the local journalists in the room.

This prompted a tongue-in-cheek response from the summit's co-chair, with Tusk remarking to Sisi, "I really appreciate how enthusiastic your media are. It's impossible in Europe to get such a reaction. Congratulations!"

While the summit ended with the two blocs nowhere nearer to seeing eye to eye on the contentious issue of human rights and other topics, the meeting's organizers say the gathering is indeed a first step toward ironing out longstanding differences. "Multilateralism and dialogue are the way forward," said Zaki. He hopes that a second meeting, planned for 2022 in Brussels, will help foster greater understanding and mutual respect.