Beirut’s Armenian district, previously a vibrant center of craftsmanship and culture in the country, is going through a decline due to a lack of government planning, with only a few artisans escaping the downturn. 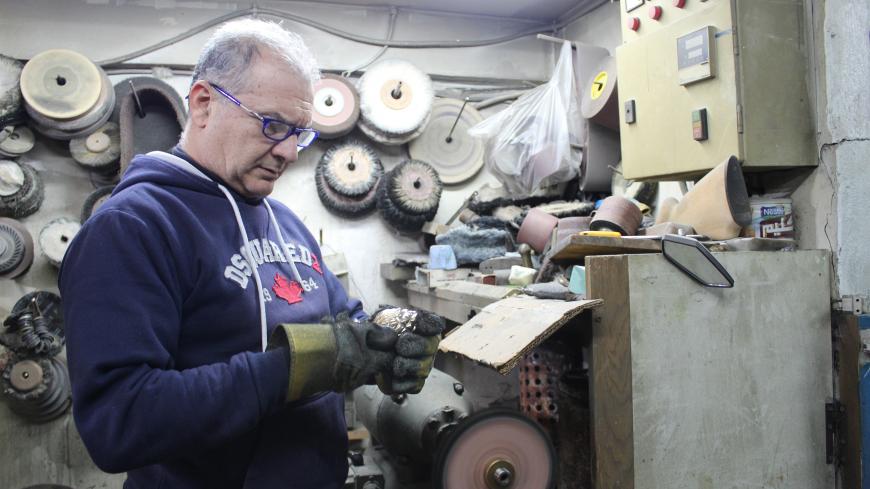 BEIRUT — Fifty years ago, the Armenian district of Lebanon’s capital was a commercial hub, with artisans making detailed carpets, meticulously designed furniture and elaborate jewelry. But the district of Bourj Hammoud is now in decline, with stores and factories closing due to poor government planning and a worsening economic situation.

One of the few recent success stories that has emerged from the district was that of Karen Chekerdjian, a Lebanese-Armenian designer who specializes in modern, abstract and elegant furniture. Born in Beirut, Chekerdjian left in 1997 to study in Italy at the Domus Academy, a private post-graduate design school in Milan. Returning to Lebanon in 2000, she had to acclimatize to a post-civil war Beirut.

“I realized only [upon my return] that there was no furniture industry,” Chekerdjian told Al-Monitor. “I am the first generation of designers after the war. Everything that was related to furniture design had already collapsed because of the war, and also because there has never been a government [that] helped to develop [the] industry.”

In 2001, Chekerdjian opened her own studio in Beirut and operated out of the Port of Beirut for 10 years; she moved the studio to Bourj Hammoud in 2016. Chekerdjian said that with this change she “hoped that [the] industrial area could become the place for all artist studios. But even that is difficult because there is no plan — from anyone — to do something about it.”

Bourj Hammoud, located on the eastern border of Beirut, once offered a safe haven for Armenians who fled ethnic cleansing under the Ottoman Empire. In the early 20th century, Bourj Hammoud quickly became one of the most densely populated areas in the Middle East, and it remains so until today. The diaspora brought with it great talent in craftsmanship, which thrived even during the Lebanese civil war (1975-1990).

“What is surprising is that the flourishing of the craftsmanship in Bourj Hammoud didn’t just happen before the civil war but during the war,” Farah Makki, an architect, social scientist and researcher for the youth-led Lebanese nongovernmental organization NAHNOO, said. “The civil war was not the main cause of the decline of craftsmanship. The decline mainly started in the 1990s and after 2005 because of the many crises.”

After the civil war, Lebanon entered an era of reconstruction characterized by neo-liberal policies and opening up to international markets, which often came at the expense of the local industry.

“In the 1990s you had the globalization of merchandise, the opening of other markets and the arrival of imported goods. We had policies that didn’t protect local goods and had unfair competition,” Makki noted.

She added, “What we are seeing in Bourj Hammoud is that you have a lot of craftsmen who had success stories during the civil war and so on. But now they are disappearing because they didn’t have a good framework at a policy level in order to protect their craft and know-how.”

This is an issue that NAHNOO, an organization based on promoting public spaces and cultural heritage, is seeking to change. This year, from January to June, the organization is conducting a mapping of some 100 artisans in Bourj Hammoud, to better understand the challenges and opportunities in the district through interviews. This information will then be developed into policy recommendations to revive the district and its cultural significance.

“A lot of people say that they no longer recognize Beirut. Culture is important because it helps you identify yourself within your society,” Makki said. “We wanted to focus on tangible cultural heritage because it is at the core of our values, and it played a big role in building our inclusive society — and this is the case of Bourj Hammoud.”

Noubar Eskidjian, a Lebanese-Armenian brass monger, represents this tangible culture, working in a small brass factory in the heart of Bourj Hammoud. His father opened the shop in 1940, after Eskidjian’s grandfather arrived in Beirut from Turkey. Eskidjian studied business and worked as a jeweler before taking over his father’s shop in 1997 and learning his craft.

“The best of times was before 1980. I don’t know [personally], but it was still very good before 1985,” Eskidjian told Al-Monitor. “I wasn’t there, but I read my father's diary and [the district] was working at a very high level. … I have two workers [currently], but my father had nine workers working every day, maybe 10-12 hours.”

Eskidjian was one of the lucky few who could sustain his business. “My job is the same, because it is not something new. Everything I make is from the Renaissance, art deco and [art nouveau] — all timeless trends. Stainless steel, LED — that comes and goes. My job stays.”

Eskidjian acknowledged that his story was not common. “I am lucky that I am working, but I have many friends who work in factories that are closing — its catastrophic,” he said. “If the area is stable, our job will be stable as well.”

There is some degree of optimism in reviving the sector through the work of NAHNOO and a renewed focus on tourism and culture recommended in Lebanon’s national economic vision, drafted by the global consultancy firm McKinsey and made public in early January.

On a local level, Chekerdjian also offered some hope, saying, “We are seeing now a lot of the young generation of designers willing to continue. And I am proud of leading the way, and I am also proud of them.”

However, she added, “But the results are due to our own efforts — no one else has helped. A few private [individuals] have made the effort to help, but it is always private individuals who are doing the job.”

The worsening economic situation also caused skepticism, and Chekerdjian concluded, “I have seen some artisans closing down their ateliers because they couldn’t afford it anymore. I work less and less, just like everyone in Bourj Hammoud.”