Craftswomen in Lebanon are eager to carry on family traditions, although they lack government support. 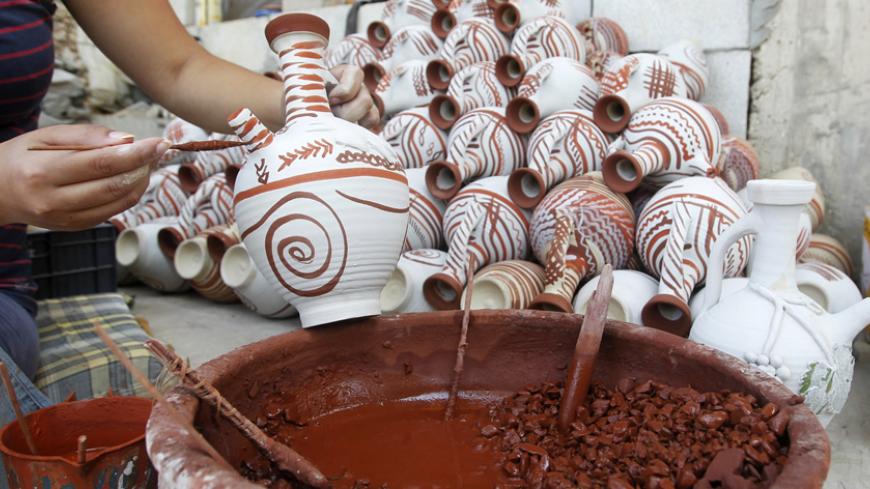 A craftswoman draws designs at a pottery workshop in the southern Lebanese village of Rashaya al-Foukhar, Aug. 22, 2014. - REUTERS/ Ali Hashisho

In the workshop of the Barchini family, science and art collide. Dana Barchini, 26, and her father Joseph Barchini, 80, both potters and sculptors, work alongside each other, whether it be in the family workspace or testing clay in the Bekaa Valley to be used for their pieces. Joseph, educated in France at the Ecole des Metiers d'art, returned to Lebanon after also receiving his doctorate at the Sorbonne, where he studied the technical aspects of the ceramics the potters created in his native country, as well as their socio-economic situation. He returned to Lebanon to use his knowledge to improve the potters’ situation and to help modernize their work process. Joseph opened his first workshop in 1965 in his parents’ home in Beirut, but when the civil war began, he had to move north. Now he spends nearly every day in his second workshop he built in Ain Saade in 1980, a village eight miles north of Beirut, testing different aspects of the pottery craft and creating new glazes through chemical reactions.

“I'm working by myself and learning the whole process. Now I know how to make my own clay. I go to the mountains, I make the clay, I love the process. Because he is a technician, he is teaching me this whole process, but at the same time, I have my own crazy ideas. I’m doing both,” Dana told Al-Monitor, sitting next to her father.

Dana is one of the many female artisans in Lebanon who are continuing a patriarchal family tradition from their fathers or grandfathers as their full-time job, despite the growing difficulties of maintaining craftsmanship traditions. The number of potters in the mountains that Joseph works with, for one, has greatly declined since he began when he was 25. He talks about a time when there were more than 100 — a number that has dwindled to fewer than 30 in the past few years.

According to Mohammad al-Mouallem, president of the Lebanese Craftsmen Syndicate (LCS), nearly all mediums are in decline in the country and have been greatly affected by several factors, including the drop in tourism, the import of cheaper goods and the lack of government support.

“It is decreasing so much. Even in the last 10 years, 7,500 craftsmen have disappeared. Now we only have 200 left. The government in our country did not help or support us,” Mouallem told Al-Monitor.

Fatima Tartoussi, 37, is a woman working in a man’s world of metal in Lebanon’s northern city of Tripoli. From stalls in Tripoli’s market to a multiple-room workshop in Bab al-Rmeil, Tartoussi works with metal as well as manages the family business. She learned this craft from her father, who despite not having sons to pass the business onto did not initially want her going into this type of work because of the physical demands of the job.

“I was 7 years old when after going to school I would see my father and his workers doing this. I wanted to do the same, but my father would not allow it. So after school, I would steal wood, copper and iron, anything I could find,” Tartoussi told Al-Monitor, as she skillfully makes a stainless steel nameplate, the smell of iron hanging heavy in the air in her workshop. When her father saw her talent, he eventually relented.

Tartoussi, now newly remarried after raising her four children on her own, echoed concerns of other artisans about the availability of cheaper goods and decline of tourism since the Syrian conflict began and the resulting unrest that has spilled over into Tripoli several times. Tartoussi wants an easier life for her children, so even though she thinks it's important to carry on the family work, she has not encouraged any of her children to pick up her tools yet.

“The future is not good. It is very difficult, financially and socially. People think our family cannot do anything but work with metal. You work a lot and only get a little money,” Tartoussi told Al-Monitor. “But even so, she is very interested,” gesturing to Nuradine, 9, standing near her mother watching her work.

Maya Hassun shares this concern in passing the soap-making tradition in her family to her two children. Hassun, 34, has a bachelor’s and master’s degree in law, but the pull of soap proved too strong. Her grandfather used to cook olive oil and bay leaf soap in Kfarhata, a village north of the southern city of Sidon. Before he died, he left his notebook of recipes and instructions from his lifetime of work with soap to Hassun, who had spent much time in his atelier as a child. Since then, she has come far from experimenting in her kitchen 18 years ago, now operating a thriving business, Sabbouna, with her husband, which includes a showroom in Sidon and a large workshop in the Chouf region.

It has not been an easy job for her, a reason why she is hesitant to expose her young children to it too much. “I'm torn. My children like it a lot. Sometimes I bring them with me, when it’s not dangerous … I want them to do the thing that they like. But I'm also tired and working so much. It would be said if none of them would continue this business,” Hassun said.

Mouallem stressed that even though some artisans are successfully carrying on family artisanal traditions, many livelihoods in the country are in danger without proper support, including the more than 100 women who belong to the LCS.

“This is a tragedy. Craft survival is not a small but big part of Lebanon. Crafts are the base of culture in the country. If we lose these, we lose the identity of Lebanon. These crafts have been helping families live for centuries.”

There are many obstacles to overcome, Dana conceded, including a lack of government support, technical schools, an easy market and an availability of cheaper goods. But she is still hopeful for the future.

“It is good that I was persistent and that I didn’t give up because look what I'm trying to continue. Imagine I did not do this and those were left behind,” Dana said, pointing to her father’s ceramic pieces on a shelf behind her, “I am carrying on something very beautiful to show people something extraordinary.”