Jordan’s Economic and Social Council issued a report that highlighted the failure of Jordanian governments over the past 18 years to live up to their promises and meet the people’s economic needs. 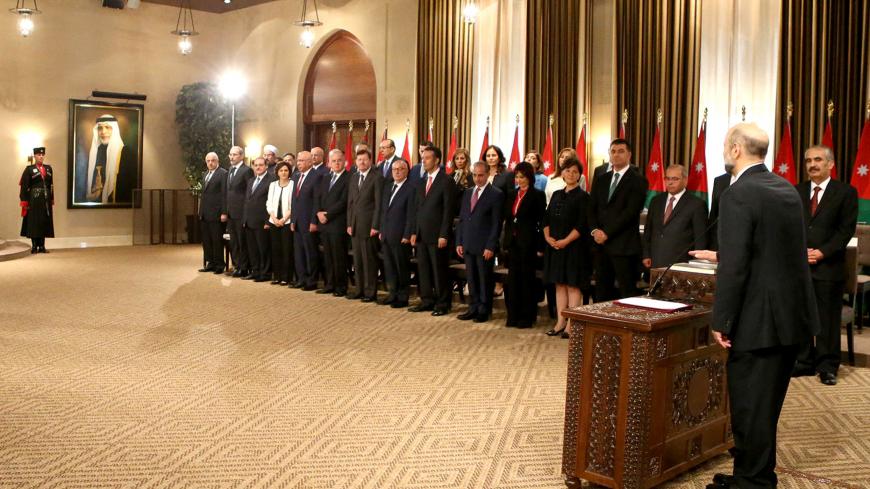 A report issued Dec. 23 by Jordan’s Economic and Social Council (ESC), a governmental advisory body, has stunned Jordanians across the board. Titled “State of the Country,” the 1,500-page document that took one year to complete with the participation of no less than 700 Jordanian experts was seen as an indictment of previous governments covering a period of the past 18 years, until early 2018.

Its most damning conclusion is that governments have failed to execute their strategies for lack of proper planning and funding in addition to poor human resources. It also concluded that attempts at achieving political and economic reforms had stumbled and that key posts were allocated according to a quota system that favors regional and supplementary identities. The report underlined the absence of a merit system in appointments, in addition to lack of accountability.

The report examined key government sectors, in addition to reviewing the performance of the legislature, the judiciary, civil society organizations and the state of human rights and political development, among others.

President of the ESC Mustafa Hamarneh, a former lawmaker with a progressive political agenda, noted in his introduction of the report that the document is the first of its kind and that it aims at giving a full internal audit of government ministries and organizations by reviewing their declared strategies and policies and evaluating their outcome. He added that the diagnostics aim at consolidating the values of justice, citizenship and rule of law in order to improve people’s lives and the quality of services provided to them.

The report notes that between 2002 and 2018, Jordan adopted nine short- and medium-range strategies to trigger sustainable economic growth, iron out structural disorders in the economy, create jobs and reduce poverty rates. But by the end of 2018, the annual growth rate remained at a modest 2.4% while unemployment had climbed to more than 18%. Total public debt amounted to 28.118 billion Jordanian dinars (about $39.6 billion), marking 96.1% of the estimated gross domestic product at the end of July 2018.

Hamarneh said that the report reviewed 120 sectoral strategies, noting that some of them had overlapped with others. He added that during the last 18 years, 370 ministers had alternated, of which 257 were new appointees. As a result of repeated failures by successive governments to achieve their goals, the trust gap between citizens and governments had widened, he said.

He added that the conclusions of the report should be open for public debate, but since it was posted online there has been no reaction from the government to its conclusions. The only response to the report’s review of political reforms in the kingdom came from the Independent Election Commission (IEC) on Dec. 26. In a media statement, the IEC praised efforts spent to produce the report but described its conclusions on political reforms as “lacking in scientific research and relying on general impressions.”

On Dec. 26, Hamarneh was quoted by Ammon News as saying that the bicameral parliament and the media have also failed to carry out their role of supervision over the government. He also criticized the taxation policy of successive governments, including the current one, which has overburdened the middle and lower classes.

The publication of the report came on the same day that King Abdullah met with local journalists, including Al-Monitor’s correspondent, to discuss local and regional issues. The king voiced optimism for 2019 citing growth in tourism, resumption of Egyptian natural gas delivery to Jordan, improvement in ties with Iraq and support by Gulf states as examples. “God willing, it would be business as usual once again,” the king said.

Abdullah said that the kingdom has been through harsh circumstances over the past years, noting, "Some are saying focus is being given to economic reform at the expense of political reform, disregarding the fact that we worked for a long time on thorough political reforms that led to an election law in 2016 that was widely accepted as a modern piece of legislation.”

But the ESC report provides a less optimistic view of the future and gives low marks to economic and political reforms that were carried out over the last 18 years. Jordanians are also less optimistic. On Dec. 6, market research company Ipsos announced the results of a consumer index poll for the third quarter of 2018, which found that more than 55% of Jordanians had a negative view of the economy. Unemployment, inflation, poverty and absence of social justice were high on the list of complaints. More than 51% complained of poor financial resources.

Meanwhile, hundreds of Jordanians continued their weekly protests close to the Prime Ministry in Amman for the third month. The protesters want the government to rescind a controversial income tax law that was passed in November, as well as a cybercrime law that will toughen penalties against those accused of spreading hate speech, rumors and others on the internet. Critics say the amendments to the cybercrime law will restrict free speech and criticism of public officials. Many protesters also called for the sacking of the government and lawmakers.

Reacting to the ESC report, the president of the Center for Defending Freedom of Journalists, Nidal Mansour, wrote Dec. 30 in Al-Ghad daily that the conclusions are shocking. He said that when the report points to major deformities in government institutions and to the spread of nepotism, then there is a need to declare a state of emergency and embrace a strategy to save the country.

Writing in Addustour daily Jan. 1, head of Al Quds Center for Political Studies Oraib Rantawi noted that Jordanians have reacted differently to the report’s monumental effort. He said many are in a state of denial and refuse to “look at themselves in the mirror for fear of what they would see.” Others, he said, were quick to condemn and attack the report and Hamarneh personally. And there are those who call for change but when confronted with a road map for change they get scared of what the future holds, he added.

Rantawi praised Hamarneh, who took over the ESC a year ago, for creating “positive engagement” between the council and the government as well as society at large. “Instead of demonizing the report and those who wrote it, we need to launch a serious discussion of its conclusions and recommendations,” Rintawi said.