The Kurdistan Regional Government has been quick to respond after the Syrian government named Masrour Barzani, the son of Massoud Barzani, to its list of terrorists. 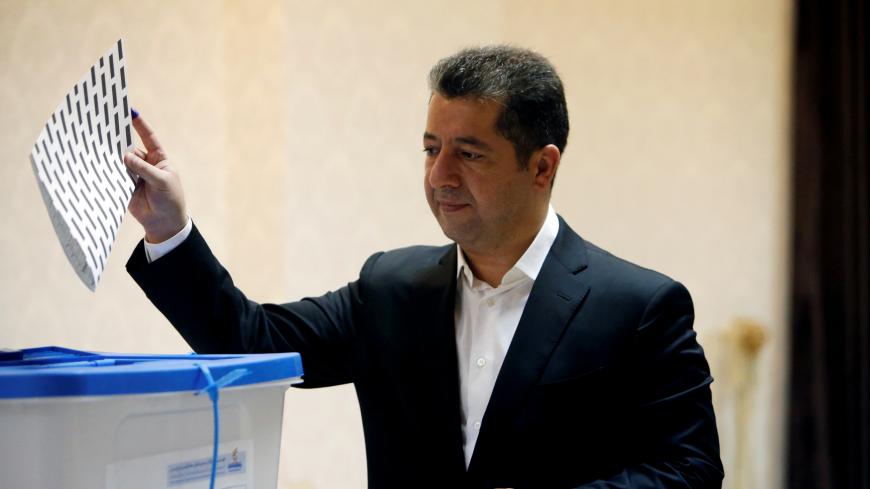 Syria’s Combat Money Laundering and Terrorism Financing Commission released Dec. 29 a list containing the names of 615 individuals and 105 entities. Notably, the list included the name of Masrour Barzani, the eldest son of former Kurdistan Region President and head of the Kurdistan Democratic Party (KDP) Massoud Barzani. Masrour Barzani heads the Kurdistan Region Security Council and has been nominated to be premier of the new government.

The Kurdistan Regional Government (KRG) was quick to respond, releasing a statement Dec. 31 saying authorities were dismissing the matter as “ludicrous” because “[the list] is issued by a chauvinistic, oppressive regime that has been an adversary to the Kurdish people and has supported the terrorists in order to remain in power." The statement accused the Syrian regime of “using internationally prohibited weapons against its own civilian people” as well.

Meanwhile, KDP Vice President Bashar al-Kiki released a statement the same day demanding the "removal of Masrour Barzani’s name from the Syrian terror list.” He told Al-Monitor in a phone call, “Our [demand] has been relayed to the Syrian authorities,” adding, “They should rectify this mistake and lift [Masrour Barzani's] name from the list.”

Regarding any future actions to be taken against Syria’s decision, Kiki said, “The [KRG] demands a formal apology by the Syrian government to the Iraqi state and the region.”

Kiki cited “political goals related to the Kurds’ situation in Syria” as the motive behind Syria’s decision, and he expressed his support for the legitimate rights and demands of the Iraqi Kurdistan region. “The Syrian decision is incompatible with the war waged by the region and regional forces on terror since Masrour Barzani was one of the most prominent names to fight the Islamic State [IS],” Kiki stressed.

Syria’s and Iraq’s Kurds are standing in solidarity with Masrour Barzani against Syria’s decision. Writer Farouq Haji Mustafa said in his Jan. 10 opinion article in Middle East Online, “Syria’s decision comes at a time when Masrour Barzani is getting ready to chair Kurdistan’s government, a step that [received] a warm welcome from global, regional and Iraqi parties.” Mustafa asked in his op-ed: “What Kurdish entities have been categorized as a terror group that received support and finance from Masrour?”

However, Syrian parliament member Mahmoud Joukhdar reportedly claims to have evidence against Masrour Barzani. In statements to the media Jan. 4, Joukhdar accused both Massoud and Masrour Barzani of “committing crimes in northeast Syria by supporting armed Kurds with finance and weaponry.” Joukhdar said his country reserves the right to prosecute Masrour Barzani on the domestic and international stage.

However, legal expert and former Judge Tareq Harb told Al-Monitor, “It’s not possible to label Masrour Barzani as a terrorist in the sense established in the terminologies of Security Council resolutions or the 2005 Iraqi Anti-Terrorism Law, which defines terrorism as 'every criminal act committed by an individual or an organized group that targeted an individual or a group of individuals or groups or official or unofficial institutions and caused damage to public or private properties, with the aim to disturb the peace, stability, and national unity …’ — which doesn’t apply to the case of [Masrour Barzani].”

According to Article 1, Paragraph 2 of the Convention for the Prevention and Punishment of Terrorism of 1937, which was established in Geneva under the now-dissolved League of Nations, the term "acts of terrorism" was defined as “criminal acts directed against a State and intended or calculated to create a state of terror in the minds of particular persons, or a group of persons or the general public.”

It is worth noting that at the time of this writing there are no Iraqi Kurdish parties or entities on terrorist lists.

But what if Syria’s list is taken seriously? Ali al-Tamimi, also a former judge, said it is not that simple. “Even in cases where the name of an individual is added to the UN’s lists of designated terrorist groups or those of other states, it doesn’t hold any legal weight,” Tamimi told Al-Monitor. “[That is,] unless a law or resolution was passed by the Iraqi judiciary or Kurdistan’s judiciary validating that list,” he added.

“The Iraqi government should address the Syrian government formally,” Tamimi said. “In any case, Iraq is not bound to extradite Masrour or anyone else for the matter based on those lists, unless he was wanted by another state through Interpol. Even in this case, Iraq can refuse to surrender him should the state wish to do so.”

Political analyst and writer Kathem al-Haj of Al-Hadaf Network for Political and Media Analysis spoke to Al-Monitor and stressed “the existence of political implications to the Syrian list rooted in [Masrour Barzani's] involvement in the Syrian situation.” Haj cited Article 7 of the 2005 Iraqi Constitution: “The state shall undertake to combat terrorism in all its forms, and shall work to protect its territories from being a base, pathway or field for terrorist activities.” He also cited Article 8, which says, “Iraq shall observe the principles of good neighborliness, adhere to the principle of noninterference in the internal affairs of other states.”

“Masrour Barzani should adhere to Iraq’s Constitution and laws,” Haj said, adding, “[He should also] not take any position in support of any religious or ethnic group in another state, because this is prohibited according to the law.

Haj said, “Iraqi Kurdistan should inquire as to the reason why [Masrour Barzani's] name was put on Syria’s list for terrorist entities through the Iraqi Ministry of Foreign Affairs and move forward by sticking to legal measure mechanisms through formal channels.” But it seems that the central government, judging from the response by Baghdad and Iraq’s Ministry of Foreign Affairs, remains unconcerned by the Syrian list. Meanwhile, the Iraqi Kurdistan government has limited its response to the one statement made to the media and merely a handful of condemnations.