It took Iraqis months to select a prime minister, and now a similar battle has arisen over the governor's office in embattled Basra. 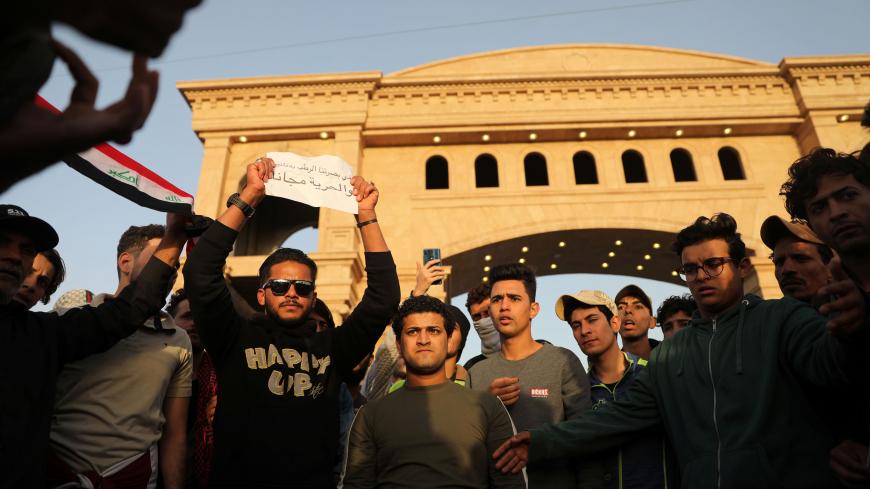 A group of Iraqi youth take part in a peaceful protest in front of the Basra governorate council in Basra, Iraq, Dec. 21, 2018. - REUTERS/Abdullah Dhiaa al-Deen

Amid ongoing protests in the southern Iraqi province of Basra, where citizens have been facing poverty and a critical lack of basic services, another dispute is emerging, this one over the governor’s position. This new controversy threatens to escalate the ongoing discord between political blocs there as the Basra provincial council feels pressure from outside sources seeking to sway its members' votes.

Political blocs realize that winning governors' positions locally could pay off later in national elections. Some observers say this competition has become an even more difficult struggle than the prolonged fight over selecting the country's prime minister. The blocs are worried this extended struggle for governor could inflame protests over the already hot topic of public services.

Ammar al-Hakim, leader of the Hikma bloc (National Wisdom Movement), a Shiite party with 19 seats in parliament, is competing for the position. He talks about “business deals and interests-based agreements behind the scenes.” He also stresses the need to “get rid of foreign interventions that affect the choice of governor.”

Commenting on Hakim’s allegations, a political source close to the government in Basra told Al-Monitor about an unprecedented level of Iranian pressure to assign this position to a member of the State of Law Coalition led by Nouri al-Maliki or the Fatah Alliance led by Hadi al-Amiri.

“Meanwhile, Muqtada al-Sadr's Sairoon Alliance and the Hikma bloc led by Hakim have another say,” said the source, who spoke on condition of anonymity. “The Iranian Consulate in Basra leads the negotiations on behalf of some political blocs. The consulate also interferes in all negotiations, contacts candidates and tries to win them over to its side. This intervention is different from all previous Iranian interventions. This time, Iran is getting into details and disbursing funds to some members of the provincial council to win their vote.”

The current governor of Basra, Asaad al-Eidani, said in an interview, “There are parties from outside the province of Basra who are seeking to replace me, although this is illegitimate.”

Eidani, who won a seat in the Iraqi parliament for the Victory Alliance led by Haider al-Abadi, has not been sworn in to that position so far. Neither has he given up his post as governor of Basra. Eidani said that he will stay in office and waive his parliamentary seat. He further underlined the need for a governor who hails from Basra, saying, “The position of the governor is not exclusive to the Hikma bloc led by Ammar al-Hakim.”

Fadi al-Shammari, a Hikma bloc leader, told Al-Monitor, “If Eidani remains a governor, he will be questioned before the provincial council, and perhaps he will be dismissed. If he chooses to go to parliament as a winner of a parliamentary seat, a new governor will be chosen. The Hikma bloc supports the demands and desires of the Basra residents, who are longing for an independent governor who meets their ambitions and can be close to them.”

He added, “We heard about bribes and purchasing of votes of some of the members of the Basra provincial council in favor of a particular candidate. We also heard about the interventions of other countries. This attests to the seriousness of the situation in the province and how it can affect the life of citizens and deepen the crisis there.”

Al-Monitor also spoke to Thawra al-Halafi, a parliamentarian for the Victory Alliance, who confirmed that political contention over the governor's position is getting worse. “Some countries are intervening to impose their choice of governor in Basra. I don't want to name these countries. At the internal level, the Hikma bloc believes it is entitled to this position, while other blocs also believe they have the right to fill it. This is how competition over this position turned into a fierce struggle that will keep getting worse."

Halafi added, “The current struggle behind the scene is much bigger than what is being shown in the media. We fear this could affect people's lives in Basra and their situation will get worse.”

This wrestling among political blocs follows a smaller battle for the position of governor of Baghdad, where the matter was resolved quickly with little media hype. This implies that the struggle in Basra is even more economic than political.

Abdul Amir al-Mayahi, a parliament member for the Fatah Alliance, described the rivalry for the governor's position as being for the funds recently allocated to the province, rather than a competition for the provision of services. He also noted that the struggle in Basra intensifies whenever development projects increase and the Iraqi government makes new financial allocations.

The battle is mainly between two camps: The first combines the Hikma bloc and Sadr's Sairoon Alliance, and the second is the State of Law Coalition with and the Badr Organization led by Amiri. When a member of the Fatah Alliance won Baghdad governor's election, this took the dispute between Sadr and Maliki to a higher level. Sadr saw the appointment of a governor for Baghdad from outside Sairoon as a blow to him.

This is why the Sairoon Alliance and the Hikma bloc see the position of Basra governor as the last opportunity, and they must seize it.

The struggle over the position could lead to major problems in the province, which has been witnessing popular movements and tension since July when the protests flared up. The political situation there could escalate to dangerous levels, compromising security and worsening the sad state of public services.