Will nature reserves law finally see the light in Egypt?

The Egyptian parliament is set to discuss and approve a draft law on the Economic Commission of Nature Reserves in a bid to encourage tourism and manage investments in such reserves. 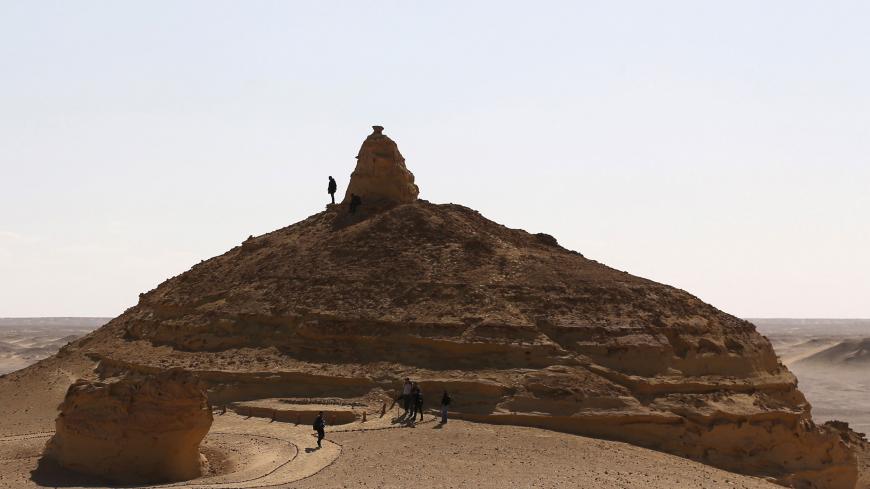 People walk around the natural reserve area of Wadi al-Hitan, or the "Valley of the Whales," in the desert of al-Fayoum governorate, southwest of Cairo, Egypt, Jan. 14, 2016. - REUTERS/Mohamed Abd El Ghany

CAIRO — While the draft law on the Economic Commission of Nature Reserves has been failing to pass in Egypt since June 2015, Minister of Environment Yasmin Fouad announced Jan. 4 that parliament will soon adopt it. This gave rise to rumors whereby the Ministry of Environment and the Cabinet intend to pass the draft law in a bid to privatize nature reserves. Both Fouad and the government’s Media Center denied such rumors on Jan. 11-12.

The draft law, previously named the General Authority of Nature Reserves, was prepared by the Legislative Reform Committee, a government committee that was formed in 2015 to prepare and submit important laws to the president, who took over the legislative power until a parliament was elected and its first session was held in January 2016.

The committee submitted the draft on June 27, 2015, to the Cabinet for approval and referral to the president. However, the draft was not approved at the time for reasons that are yet to be revealed.

Subsequently, the parliamentary Energy and Environment committees prepared another draft of the same law in December 2017 under the title of the Economic Commission of Nature Reserves.

While the head of the Nature Conservation Sector at the Ministry of Environment, Ahmed Salama, announced in February 2018 that parliament would approve the draft within 3 months, the bill was never approved for reasons that are yet to be identified.

In this vein, Fouad brought back the draft law to the surface Jan. 4 and said that parliament would tackle it as soon as possible, along with two other environment-related draft laws.

A well-informed source at the Ministry of Environment told Al-Monitor on condition of anonymity that the adoption of the draft law was delayed from 2015 to 2019 because of the economic crisis that Egypt is facing and that needs resolving first.

Egypt’s economic crisis started in 2011 when tourism and foreign investments dropped to low levels due to the January 25 Revolution. In 2016, Egypt almost declared bankruptcy.

The source pointed out that as the crisis fades and foreign investments return, state bodies, most notably the Ministry of Environment, are seeking to achieve sustainable development. Nature reserves, he added, cover 17% of ​​Egypt’s surface and are the most important tool of sustainable development in the field of tourism, economy and biodiversity.

“There are a lot of tourists who have been to Egyptian monuments and beaches more than once, so the only way to lure them to return to Egypt is by promoting new sites such as nature reserves. Egypt is working on including such reserves in international encyclopedias and online tourism pages,” he noted.

He said, “To prepare for the reception of tourists in nature reserves, the Ministry of Environment is planning on contracting specialized companies that would manage such reserves under its own supervision, just like the Ministry of State for Antiquities granted Orascom Investment Holding the right to manage the pyramids area. These companies would be tasked with developing the reserves and establishing huge investments that the state is probably unable to afford. In return, the companies would get a profit percentage. But to organize the documenting, marketing and management processes, the bill needs to pass.”

The source stressed that granting administration rights is one thing and privatizing or granting usufruct rights is another. He explained that privatization is an operation whereby the state does not recover what it sells. Privatization, he said, “is illegal and unconstitutional when it comes to nature reserves that are part of Egypt's wealth, just like antiquities.”

He pointed out that granting administration rights infers that an Egyptian or international company manages the nature reserves under the supervision of the Ministry of Environment in return for a profit percentage.

The law, he added, is necessary because it sets new mechanisms to punish owners of administration rights in the event they inflict any damage to the reserves. The law also sets the entrance fees to the reserves.

Hegazy said that the draft law of the Economic Commission of Natural Reserves does not abolish Law No. 102, which prohibits privatization and usufruct. It rather aims to get rid of some of its shortcomings by imposing heavier penalties against any damage or attempted damage to nature reserves.

He noted that the draft law sets entrance fees for Egyptians and foreigners, investment controls and rules relating to the touristic exploitation of nature reserves and the exploitation of the areas surrounding the reserves.

“Establishing villages and hotels at close distances from the reserves may harm the soil, plants or livestock in the reserve, and all of the previously mentioned controls show how the Economic Commission of Nature Reserves will be supervising the activity of tourists and investors, all the while enforcing the stipulated sanctions in the event of damage to nature reserves,” Hegazy added.

Ahmed Amer, a researcher specializing in the field of archaeology and tourism activation, told Al-Monitor that in the wake of the security chaos that followed the 2011 revolution and led to many looting operations that affected nature reserves, the draft law guarantees the protection of such reserves against any encroachment.

The bill, he noted, ensures the economic and touristic exploitation of nature reserves and protects them against any negative effects that may arise from the investors’ or tourists’ exploitation thereof.

Amer pointed out that “allowing investments both in and around nature reserves ensures their worldwide promotion at a time when the state has been unable to promote nature reserves over several decades.”