Egypt hopes US PR firm can brighten its dismal image

To attract investments, Egypt is counting on a US public relations firm to improve its international reputation. 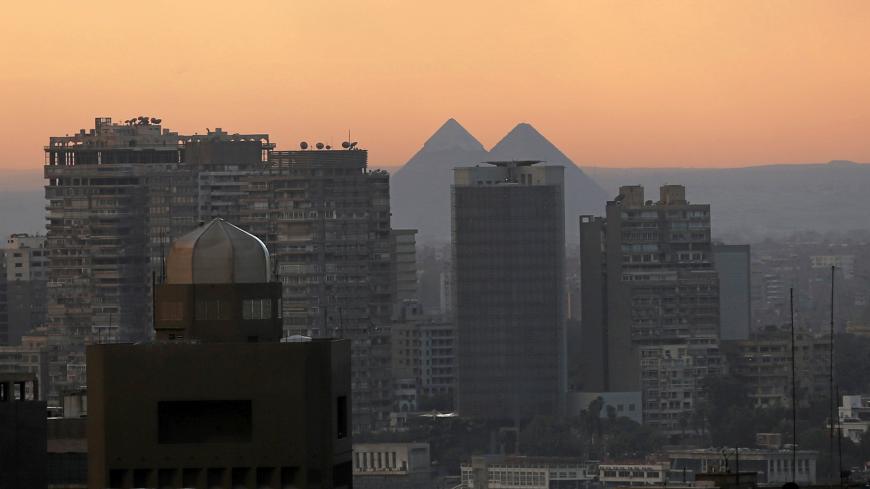 The Giza Pyramids are pictured behind the River Nile, houses and hotels on a cold day around in Cairo, Egypt, Dec. 5, 2016. - REUTERS/Amr Abdallah Dalsh

CAIRO — Egypt has hired an undisclosed US public relations firm to counter negative reports about the country and boost its image abroad. Government officials expect the effort to improve investment in Egypt, while activists see it as an attempt to cover up or gloss over economic hardship and human rights violations. The Dec. 23 announcement ignited social media reactions against the government.

Yet as recently as this week President Abdel Fattah al-Sisi denied on "60 Minutes" a Human Rights Watch report that Egypt is holding 60,000 political prisoners.

Egyptian Minister of Investment and International Cooperation Sahar Nasr said Dec. 23 at a meeting with the parliamentary Economic Affairs Committee that her ministry has contracted an American public relations firm, though she did not reveal the firm’s name or the contract’s duration and cost.

During the meeting, which focused on Egypt’s investment strategy from July 2018 to 2022, Nasr said the contract is designed to help counter "evil people who circulate political, economic and security reports against Egypt and the regime." She was referring to the Muslim Brotherhood's Sunni Islamist political movement outlawed in Egypt.

She added, according to Sawt al-Omma news site, that the PR firm will enable Egypt to “publish articles indicating that [Sisi’s] policies have managed to bring about security in the country … shedding light on the investment environment and promoting investment opportunities."

The company isn't being hired to lobby the United States, she said, but will coordinate Egyptian officials’ visits abroad.

Since it agreed to a $12 billion, three-year loan through the International Monetary Fund in November 2016, the Egyptian government has been working to prepare a favorable environment to entice foreign companies to invest in the Egyptian market. Cairo seeks to boost the economy, create new jobs and subsequently reduce the budget deficit and public debt.

Under the loan deal, the government has implemented economic reform, imposing a value-added tax of 14% and other taxes on commodities and cellphones. The government has also sharply increased electricity and oil prices, floated the Egyptian pound, adopted austerity measures and passed laws and amendments to create a pro-investment environment.

Nevertheless, such measures have yet to bear fruit. Foreign direct investment, or FDI, has declined significantly in the past two years; in the second quarter of 2018, FDI hit its lowest level since the austerity plan was put in place. Reuters reported Oct. 4, “The country attracted $600 million in non-oil FDI in the second quarter, down from $956 million in the first quarter and $1.51 billion in the last quarter of 2017.”

Observers believe that insecurity and human rights indicators are behind the decline. Yet the government blames the Muslim Brotherhood's campaigns to tarnish Egypt's image internationally.

Commenting on whether a PR campaign could attract foreign investment, economist Adel Abou Latif told Arabi 21 on Dec. 26, “The decision to invest is subject to multiple genuine factors that are examined meticulously and in depth. These include the economic indexes, political and security situations, exchange rates, taxes and customs duty rates, cash transfers, corruption and bureaucracy. This decision is not based on media articles and reports.”

He added, “An unstable situation has prevailed over Egypt in past years that caused foreign investment to be mostly centered on government bonds, and oil and gas exploration. Yet, during this period, no projects or factories designed to bring new technologies to the country or to employ thousands of unemployed youths were seen."

Hisham Kassem, a media figure and publisher, told Al-Monitor the PR firm's role is limited to providing media services, without mediating any developments or agreements made with the United States. The company will coordinate Egyptian officials’ meetings with members of Congress and other US officials and give them an opportunity to communicate with the press and media figures in the United States, he added.

He doesn't think this measure will improve Egypt’s image abroad, because of the many international human rights reports criticizing declining freedoms, incarceration of journalists, and the surging number of inmates and instances of torture.

The Office of the United Nations High Commissioner for Human Rights indicated in a June 2018 report, “A spate of arrests, interrogations and detentions of activists, bloggers and journalists in Egypt over the last few weeks appears to indicate a significant escalation in the crackdown against the rights to freedom of expression, association and assembly in the country.”

Kassem called on state agencies to employ new strategies to handle negative reports so as to enjoy US aid, and not to rely solely on the enhanced relations between the current regime and White House. "This is true particularly since the US is a state of institutions, and US President Donald Trump alone can neither halt nor increase aid to Egypt" without congressional consent, he added.

Reuters reported Aug. 22, 2017 that the Trump administration decided to withhold $291 million in aid to Egypt for falling short of making strides toward respecting human rights and democratic standards.

On May 31, 2017, Republican Sens. John McCain and Lindsey Graham issued a statement after Sisi signed a law regulating the work of civil society organizations. They stated, “President al-Sisi's decision to ratify the draconian legislation passed through Parliament last November that regulates the work of nongovernmental organizations is the latest sign of a growing crackdown on human rights and peaceful dissent in Egypt.”

In parallel, and in order to enhance its image in the eyes of the world, the government in November formed a committee to amend the laws regulating NGOs, in response to the call Sisi made Nov. 6 at the World Youth Forum. “I would like to tell everyone inside and outside of Egypt that we are keen to keep the law balanced so it achieves what is required in terms of properly organizing the work of NGOs,” Sisi said.

Moreover, Egypt said Sept. 1 that it is determined to ratify a law requiring insurance for tourists. This is added to the publicity campaign on the tight security measures at Egyptian airports to tell the world Egypt is a safe country.