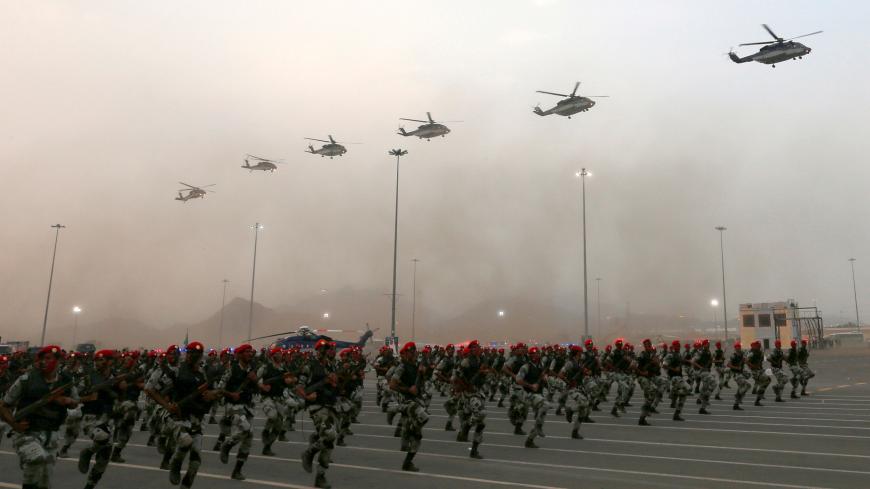 Members of Saudi security forces take part in a military parade in preparation for the annual hajj pilgrimage in the holy city of Mecca, Sept. 5, 2016. - REUTERS/Ahmed Jadallah

Saudi Arabia could soon be on the hook for millions of dollars in US military training in the latest example of bipartisan anger at the kingdom.

The Republican-held Senate and Democratic-controlled House passed dueling spending bills this week that differ on border security and immigration policy. But both bills contain a provision that cuts Saudi Arabia off from a key military training program that enables Riyadh to save up to $30 million per year.

The Senate failed to secure the 60 votes needed to advance its spending bill by 50-47 today, while the House passed its rival bill 234-180 on Wednesday. Still, the fact that lawmakers in both parties have at least agreed to a compromise on foreign aid provisions serves as a strong indication that the anti-Saudi language contained in both bills will eventually become law after the shutdown ends.

Sen. Patrick Leahy, D-Vt., the top Democrat on the Senate Appropriations Committee, has long advocated for ending Saudi Arabia’s discounted military training costs, but had faced resistance from his colleagues in previous years.

“He objects to American taxpayers subsidizing an oil-rich country and believes they should pay the full amount for the military training they receive,” Tim Rieser, a foreign policy aide to Leahy, told Al-Monitor. “He also objects to providing this favorable treatment to a country whose government engages in a consistent pattern of gross violations of human rights.”

“There’s been a lot of discussion about their responsibility, the actions of Saudi Arabia, and I know that many committees are involved in hearings,” House Appropriations Chairwoman Nita Lowey, D-N.Y., told Al-Monitor.

Saudi Arabia typically only receives about $10,000 in IMET assistance every year — far less than the 10 other Middle Eastern and North African countries that participate. But even that symbolic amount makes Riyadh eligible for reduced rates on other military training necessary to operate the kingdom's US-made military arsenal.

“If the Saudis want [military training], they can pay for it,” said Rieser. “The Saudis can buy military training from whomever will sell it to them, but they use US equipment and it would not be in their interest for their longstanding partnership with the United States to deteriorate. The question is whether they will respond to the outrage over the murder of Khashoggi and the mayhem they have caused in Yemen.”

Leahy’s office estimates that the token IMET funding saves Riyadh anywhere from $20 million to $30 million in training costs per year.

Still, the training discounts amount to pennies in Saudi Arabia’s $295 billion budget for 2019. If the Saudis are forced to pay the full cost of the training, Rieser said that some of that money could go to fund the Defense Department’s educational institutions such as the Army War College.

“An example of that would be the $750 million package that they purchased a couple of years ago for targeting purposes,” said Seth Binder, an advocacy officer for the Project on Middle East Democracy, which has pushed Congress to end IMET funding for Riyadh. “That package would have been discounted because of IMET aid.”

While Congress is set to ban IMET assistance for Saudi Arabia, the State Department notably did not propose any IMET funding for Riyadh in its 2019 budget request, which it drafted months before Khashoggi’s murder.

Some lawmakers want to go even further and kick Saudi Arabia out of all US military training programs entirely until Khashoggi’s killers are punished. Many lawmakers on both sides of the aisle believe Crown Prince Mohammed bin Salman ordered his execution.

“We need to curtail bilateral military assistance programs until the Saudis account for themselves and bring to justice all who are involved in the reprehensible murder of an American resident,” Rep. Gerry Connolly, D-Va., told Al-Monitor. Khashoggi had lived in exile in Connolly’s district.

Already, Rep. James McGovern, D-Mass., who controls the House floor as chairman of the Rules Committee, has introduced a bill banning Saudi Arabia from US arms sales, training and defense cooperation.