Turkey is closing out 2018 without taking a breather from its oppressive tactics for stifling dissent. 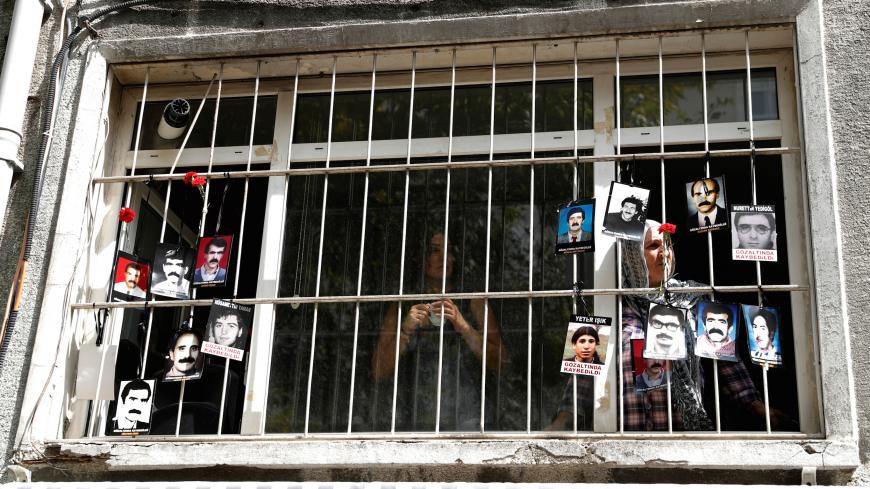 A member of the Saturday Mothers looks out of the window of Human Rights Association after they were prevented by the security forces to march to Galatasaray Square, where they hold a vigil every week, sitting in silence and holding pictures of relatives who went missing in police detention, in Istanbul, Turkey, Sept. 8, 2018. - REUTERS/Murad Sezer

Even as the West looks back over Turkey's blighted human rights record for 2018, President Recep Tayyip Erdogan is warning the United States of pending military interventions against Kurds in northern Syria.

On Dec. 14, during his speech at an Islamic Cooperation Organization conference in Istanbul, Erdogan said Turkish fighters will enter Manbij unless the United States removes the Kurdish People's Protection Units (YPG) from the area. The United States and the YPG have fought together against the Islamic State in Syria. Turkey considers the YPG to be affiliated with a terrorist group.

Before that threat, he had announced Dec. 12 that a Turkish military operation against Kurdish groups (which he called "separatist terrorists") in northern Syria, east of the Euphrates River, is imminent. He specifically said, however, that his forces would not target US forces there.

According to some observers, these pronouncements should be seen as a ploy by Erdogan to influence local elections scheduled for March 31. It’s no secret that Turkey’s financial indicators for the first quarter of 2019 don’t seem promising. Therefore, Erdogan needs to divert the public's attention to foreign policy and rally the citizens around security issues by mobilizing nationalist feelings.

It's too early to predict how 2019 will treat Erdogan, but it's clear his track record of democracy and human rights must improve. Several recent examples drive this home.

Despite the November ruling of the European Court of Human Rights (ECHR) that the government has unlawfully imprisoned Selahattin Demirtas — Turkey's top Kurdish leader and former co-chair of the pro-Kurdish Peoples’ Democratic Party (HDP) — he has been in jail more than two years.

The EU’s Turkey rapporteur, Kati Piri, authored the report in which she acknowledged that some of the blame in the Demirtas case lies with the EU for failing to press the Turkish government more forcefully on his case and the issue of jailed parliamentarians. She tweeted Dec. 11: “He is jailed, denied his freedom of expression and right to politics. For what? For representing millions of people in Turkey who want peace and equal rights.” At the end of her tweet she saluted the Kurdish leader in his mother tongue and said “Selahattin, you are not alone!”

The European Parliament and the institutions of Europe seem to follow Demirtas’ case closely compared with other rights violations in Turkey. EU foreign policy chief Federica Mogherini made an unusual appearance Dec. 11 at Parliament’s podium to address the subject.

“The fate of Selahattin Demirtas is an issue that I believe lies close to the hearts of many of us. He has been for long years an interlocutor for many, and a key figure in Turkey's democratic debate. Today we discuss not just the fate of a human being, which is probably the most important thing a hemicycle can discuss, but also the state of Turkey's democracy; we discuss the individual and collective rights of all Turkish citizens,” she said.

“The independence of Turkey's judiciary is being undermined. Fundamental rights, such as the presumption of innocence, are often ignored and violated. … I believe that it is not only Turkey's responsibility, but also [in] Turkey's interest to immediately follow up on rulings by the European Court of Human Rights,” she concluded.

Neither Mogherini’s speech, nor Piri’s tweets calling Demirtas’ trial “bogus,” found any space in the Turkish media — most of which is strictly controlled by the government.

This isn't surprising. There is no freedom of the press in Turkey, in a very real sense.

As a recent report from the Committee to Protect Journalists (CPJ) said, “China, Egypt and Saudi Arabia imprisoned more journalists than [they did] last year, and [still] Turkey remained the world’s worst jailer." It added, "Even as Turkish President Recep Tayyip Erdogan has been the fiercest critic of Saudi Arabia for the murder of [Washington Post columnist Jamal] Khashoggi, his government continued to jail more journalists than any other on the planet. CPJ found at least 68 journalists jailed for their work in Turkey."

Equally noteworthy is Turkey’s rank among countries whose citizens sought asylum in Europe. According to a report published Dec. 11 by the European Asylum Support Office, “Iran and Turkey have both been amongst the top five countries of origin over the past few months. In October, Iran was the fourth-largest country of origin of applications for international protection in the EU+ [EU member states plus Norway, Switzerland, Iceland and Liechtenstein], (up from 10th in October 2017), followed by Turkey, (up from seventh in October 2017).”

The report added, “October 2018 also marked the highest number of applications (2,880) lodged by Turkish citizens on record, with an increase of 9% over the previous month. Based on available data, the majority of Turkish applicants is likely to have recently arrived in the EU+. The increase in applications, not paralleled by an increase in decisions, has led to higher numbers of those awaiting a first-instance decision, with around 17,300 Turkish first-instance cases open at the end of October. This number of pending applications of Turkish nationals is [also] the highest on record."

The statistics show that most of those who seek asylum in Europe are young professionals with university degrees. That indicates Turkey faces a severe brain drain.

That may not sound surprising, given the Turkish government's continuous repression and persecution of its people.

For example, 79-year old professor Gencay Gursoy, a renowned neurologist who had been chairing the highest professional medical association of Turkey, was sentenced Dec. 11 to two years and three months in prison for initiating a signature campaign. The campaign showed solidarity with Turkish academics who were expelled from their universities for signing a Peace Declaration in January 2016 and condemned a military crackdown in Kurdish-majority cities and towns.

Gursoy, a human rights advocate, is accused of “propagandizing for an armed terrorist organization.” He wasn't granted any reduction in his sentence, the court said, "considering his negative attitude and behavior in the hearing and the conviction that he does not feel any remorse." Gursoy is a well-known, respected, lifetime pacifist.

The week before the Gursoy ruling, Sirri Sureyya Onder, a former HDP member of parliament and a well-known peace advocate involved in the negotiations between the government and Kurdish militants, went behind bars Dec. 6 to serve his sentence of three years and six months. There wasn’t much fanfare, as the public is getting used to these controversial sentences. Like Gursoy, Onder was also was accused of supporting “a terrorist organization,” because of a speech he made in 2013. All that he said was, “We will transform Turkey into a rose garden,” but the indictment misquoted him as saying, “We will transform Turkey into a graveyard.” Neither the prosecutor nor judges bothered to correct the indictment and instead built their verdict on this false information.

On the same day as Onder’s verdict, Dec. 4, an appeals court condemned Demirtas to spend four years and eight months in prison. The verdict was given in haste to bypass the ECHR's ruling and make Demirtas’ release impossible. According to the international court’s ruling, Demirtas’ lengthy pre-sentence "detention" was based “on grounds that could not be regarded as ‘sufficient’ to justify its duration.”

All these developments send a clear message to all peace activists and to civil society: Dissent will not be allowed in Turkey and will be punished severely.

There's no question Turkey is closing 2018 with a dismal track record, given its deepening democracy deficit. Next year doesn’t seem promising either. One can only expect more trouble.