Gregory Buchakjian photographed abandoned buildings in Beirut to document the political and economic crises that have shaped the city and the rest of Lebanon. He is currently presenting what he discovered in an exhibition, book, and film. 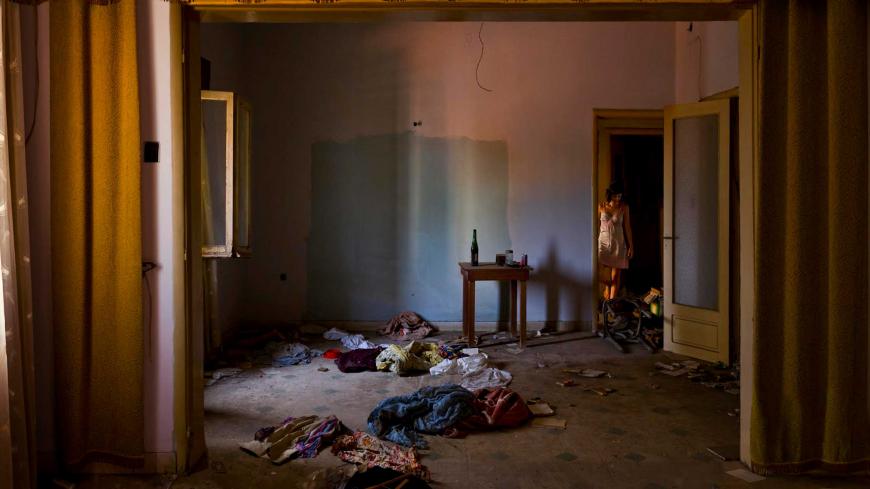 In Beirut's Achrafieh district stands a dilapidated house, its chipped paint obscured by an overgrown garden. The only way in is through a roofless room on the side of the abandoned structure. This is just one of 700 deserted buildings explored and photographed by Gregory Buchakjian in “Abandoned Dwellings: A History of Beirut,” a new book culminating a nearly decade-long documentary project.

Buchakjian launched the book on Nov. 29 at the Sursock Museum in Beirut in tandem with a photography exhibition, “Abandoned Dwellings: Display of Systems,” which runs Nov. 8 through Feb. 11, 2019, and also features a short film. A Beirut native, Buchakjian is an art historian, multidisciplinary visual artist and director of the School of Visual Arts at Alba, the Lebanese Academy of Fine Arts.

In 2009, the old buildings that Buchakjian had grown up exploring began to be demolished and replaced. “There was a feeling that these houses where disappearing, that the whole city was disappearing,” Buchakjian told Al-Monitor. “The city was transforming at such a fast pace, I needed to use a camera to capture something before it disappeared completely.”

For Buchakjian and his team, this approach slowly evolved into taking photographs of models in the buildings. “I realized that I needed someone to occupy the space,” he said. “It was a way for us to say we were taking back the houses.”

When Buchakjian began the project, he did not know where it would lead or how his artistic and historical interests would interact.

“At some point we found ourselves with a multitude of processes,” Buchakjian explained, “one taking pictures of people inhabiting the space, one consisting of mapping and surveying, and one consisting of retrieving objects. All these processes were accumulating.”

By 2012, Buchakjian was in possession of a large amount of documentation and pictures revolving around stories, objects, places and buildings. “It was totally chaotic, and I had no idea what to do with this,” he said.

Valérie Cachard, a writer and artist, who modeled for some of Buchakjian's photographs and edited “Abandoned Dwellings.” She explained to Al-Monitor how the project was divided into parts: the exhibition explores the artistic side, focusing on the photographs; the short film provides a platform to those who used to live in the houses; and the book, of a historical nature, provides a structure for the data collected.

Buchakjian and Cachard used the book to tell the story of Lebanon's social and political crises through the deserted buildings of Beirut. While the Lebanese civil war (1975-1990) is a prominent theme, the book covers the 19th century to today, documenting how abandoned buildings served as military outposts, prisons and informal quarters for criminals and for refugees fleeing war.

“During the civil war, it was very common to see people occupying a better space or a bigger space [than they do now],” Mona Fawaz, an associate professor of urban planning at the American University of Beirut, told Al-Monitor. She noted that the different militias and political factions would often move their supporters into neighborhoods under their control, citing as an example the Palestinian Liberation Organization, which moved its constituents from Naba’a in West Beirut to informal settlements in south Beirut.

The militias would also occupy strategic buildings, such as skyscrapers, hotels and houses overlooking the Green Line, the wartime demarcation between East and West Beirut. Many of these buildings remain rundown, abandoned and scarred by gunfire and shrapnel.

A different kind of reminder of the war confronted Buchakjian when he entered an abandoned first floor apartment in October 2015 to find a young man sleeping there. He claimed to be defending the “House of Sheikh Pierre,” referring to the late Pierre Gemayel, founder of the Christian Kataeb Party and father of Lebanese Forces founder and assassinated President-elect Bashir Gemayel, who lived on the third floor of the building in the 1970s.

Forty years after the war, some of the buildings once occupied by militias have been renovated. Among them, the Barakat Building, which Christian militias seized for its view over a major combat zone, is now the Beit Beirut cultural center. Buchakjian found archival pictures of the now-converted buildings and no shortage of deserted houses, the latter situation ironically now being exacerbated by postwar reconstruction.

“This is a city that is growing and has grown historically through a lot of informality and violations of the law,” Fawaz explained. “A lot of the buildings are abandoned because their actual owners are not here. They have either been bought up by a developer waiting for the right opportunity to [sell] or because of some kind of conflict over ownership …, which complicates demolition.”

Fawaz noted that Lebanon is currently experiencing a real estate bubble, with people buying houses and apartments as investments. “You have multistory apartment buildings where you have two apartments that are full, [but the rest of the] building is empty. Every dark apartment is a bank account."

This has led to many vacant buildings, which criminal organizations sometimes use to set up shop. Buchakjian ran into one such situation in 2011 in the Bachoura district. While exploring an abandoned apartment, he encountered a young man who demanded that he leave. Later Buchakjian heard that a gang employed by political factions operated from the building.

With the book, exhibition and film complete, Buchakjian found time to make public data cards for the 700 buildings he explored. They contain information on the location, size, history and current status of each structure. Buchakjian hopes others will build on his work.

“We did our job. Now that this is here, everyone is free to do what they want with it,” he said. “I really wanted to share all the information.… It’s here. It’s available.”