Feeling that their chances of returning to their hometowns in Syria are dropping, Aleppo’s displaced are seeking stability by preserving their old social ties in a new place. 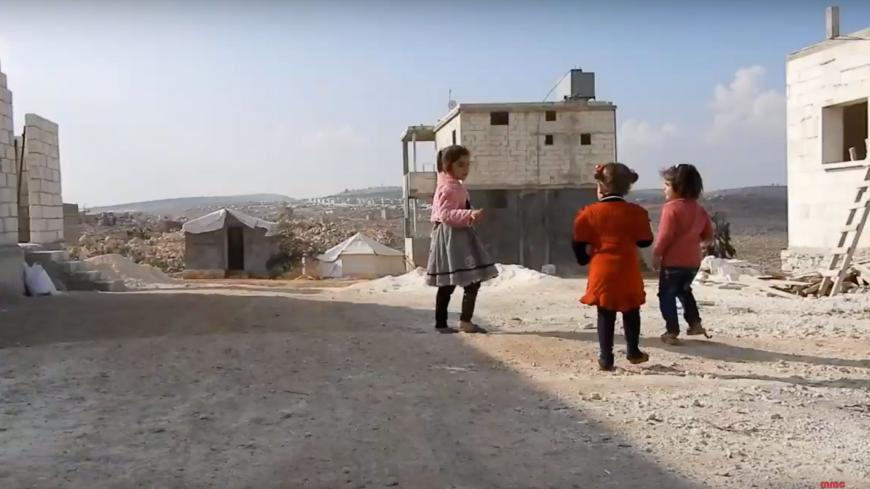 IDLIB, Syria — Mohammad Issa puts down the tiles he's been carrying on his shoulders, then begins stacking the bricks, placing layers of cement in between to build the foundation for an additional room to widen his small house.

Issa is a construction worker who has been living for two months with his wife and four children in this house. Once he completes his work, the house will have two rooms in addition to a kitchen and bath.

New Ratyan village, about 3 kilometers (2 miles) north of al-Dana city in Idlib governorate, is his home now. Displaced people originally from the town of Ratyan in northern Aleppo province have established their new village and named it New Ratyan to remind them of the place they were forced to leave in February 2016 after Syrian regime forces and allied militias seized control.

Cement spots stain Issa’s worn-out clothes. As he takes a short break, he tells Al-Monitor, “Since our displacement from Ratyan in the Aleppo countryside three years ago, we started moving from camp to camp close to the Turkish borders. We had a rough time, and we suffered a lot. The tents neither protected us from the summer heat nor the winter cold.”

Leaning against a cement bag, he adds, “We lived in the Deir Hassan camp complex nearby until we [the inhabitants] decided to share a piece of land that is 2,000 square meters [about 21,500 square feet] to create a smaller version of our original town."

The UN High Commissioner for Refugees (UNHCR) estimates the number of displaced in Syria — those who left their homes but not the country — at 6.6 million.

Internal displacement in Syria has always been considered temporary. The displaced or migrants often rent houses or live in camps in the hope of returning home soon. But with this feeling dwindling, the situation has changed. The displaced are trying to settle down and find an alternative home.

Issa said, “As long as our town is under the regime’s control, we can't return. We're afraid of retaliation or arrest, and in the best-case scenario, we might be dragged into conscription within the regime ranks.”

New Ratyan, where construction started in March, has expanded beyond the initial parcel of land. It includes a mosque and a small school and accommodates 500 people. All of these residents were displaced from Ratyan in Aleppo, according to Ahmad Tahan, head of the village council.

Tahan told Al-Monitor that low land prices encouraged them to proceed with the project. The initial parcel of land cost $4,000, an amount collected through inhabitants’ donations. The money was paid to the Deir Hassan council.

Although the houses they built are modest and small, covering no more than 50 square meters (not quite 540 square feet), and have limited services, their inhabitants find that this is their best option, compared with the tough living in tents, especially in winter.

In a quest to improve their living conditions and face the weather changes, the inhabitants spent their savings on these houses, feeling their temporary abodes were turning into permanent residences.

Kawj sells food products in one of the rooms of his house overlooking the street. Sitting in a chair waiting for customers, he said, “I spent everything I own to build this house. Still, I hope to return to my hometown. ... It's where I was raised. But to be honest, returning seems unlikely," at least for many years.

While New Ratyan is growing amid the influx of new displaced people, it is a slow process due to financial impediments. These people are building homes close to those of their old neighbors and friends. Wherever you look among the small houses, you find New Ratyan written on the walls. It is a constant reminder that old Ratyan is their hometown and that they have the right to return to it.

Preserving social ties constitutes a priority for the displaced, especially those who live in rural areas, as it makes them feel safe and stable.

Kawj says he is proud of the ethics of the people of his town. “The people of our town are known for their goodness, and we help each other all the time in everything. We shared construction material and experience, each according to their capacity. I am happy because we managed to build a smaller version of our town, and even happier when a new family builds here.”

Can the New Ratyan story happen elsewhere, as Syrians continue to be displaced from their hometowns to settle in others? Would that promote the demographic change policy President Bashar al-Assad’s regime is accused of in coordination with Tehran? Assad is said to be dismissing opponents, mostly Sunnis, from critical locations, especially Homs (in the country's center), on the coast and in the areas surrounding Damascus.

Idlib, which is still under the control of opposition factions, has turned into a shelter for refugees and the displaced following the advance of regime forces in central and south Syria. With the regime forces taking control of those regions, the displaced residents are trying to stick together in their new destinations to preserve their habits and norms.

Feeling that their chances to return to their hometowns in Syria are dropping, the displaced are seeking stability while preserving their old social ties.