Ambassador Khalid bin Salman, who has faced scrutiny over his public handling of the Jamal Khashoggi affair, has left Washington for the second time since the journalist’s killing. 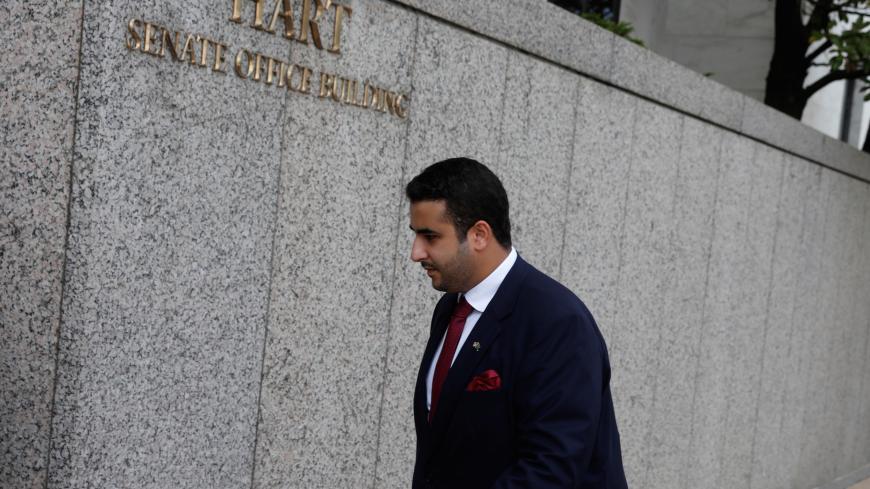 Saudi Ambassador to the United States Khalid bin Salman, who has faced withering criticism for his handling of the death of journalist Jamal Khashoggi, has left Washington for the second time since the killing.

News of his departure comes as the Financial Times reported Wednesday that Prince Khalid is next in line to become national security adviser, fueling speculation across Washington that he may have left his post for good.

The ambassador “is attending Formula E taking place just outside Riyadh and plans to be back afterwards,” an embassy spokeswoman told Al-Monitor via email.

The ambassador previously departed Washington in October under a fog of criticism after a Saudi prosecutor confirmed Riyadh’s role in the killing. Prince Khalid returned in late November to attend the funeral of former US President George H.W. Bush.

The ambassador stirred controversy by denying Riyadh’s role even as a steady drip of Turkish and US intelligence leaks began to link Saudi Crown Prince Mohammed bin Salman directly to Khashoggi’s Oct. 2 slaying. The CIA concluded in November that Prince Mohammed ordered the killing, according to press reports.

But the long-planned move was delayed by the fallout surrounding Khashoggi’s death, which entangled the young ambassador, who drew on false promises of evidence from Riyadh about the killing, the sources said.

“They told him, look, nothing happened, and we’ve got pictures, and that’s what he said, and it turned out they didn’t have pictures,” a former US official told Al-Monitor. “He was as miffed and embarrassed about it as anyone else.”

In private meetings, top lawmakers told reporters they did not accept that explanation. Senate Foreign Relations Chairman Bob Corker, R-Tenn., accused Prince Khalid of lying when the Saudi royal failed to provide video evidence of the journalist’s killing. Corker introduced a resolution that passed on Thursday to formally condemn Saudi Arabia for Khashoggi’s death, adding pressure on the Trump administration to respond.

The Washington Post reported that Prince Khalid told Khashoggi he would be safe to travel to the Saudi Consulate in Istanbul to obtain documents he needed to marry a Turkish woman, according to sources familiar with the intelligence intercepts.

Though the Donald Trump administration signaled this week that Riyadh will face no further punishment for Khashoggi’s death, Washington has become increasingly hostile territory for the Saudis. Sen. Dick Durbin, D-Ill., has called on the State Department to expel the young prince from the United States.

Separately, the Senate has asked the US administration to decide whether to sanction Prince Mohammed for his role in Khashoggi’s death. The Senate voted today to end US involvement in Yemen, which includes intelligence support to the Saudi-backed coalition fighting Houthi rebels in the country, though Republicans in the House have blocked legislators in the lower chamber from considering the bill.

Update: Dec. 13, 2018. This article has been updated with a comment from the Saudi Embassy in Washington.