Senior Ramallah Palestinians warn Israel that its efforts to weaken President Mahmoud Abbas would end up with Hamas taking over the West Bank and Palestinian leadership. 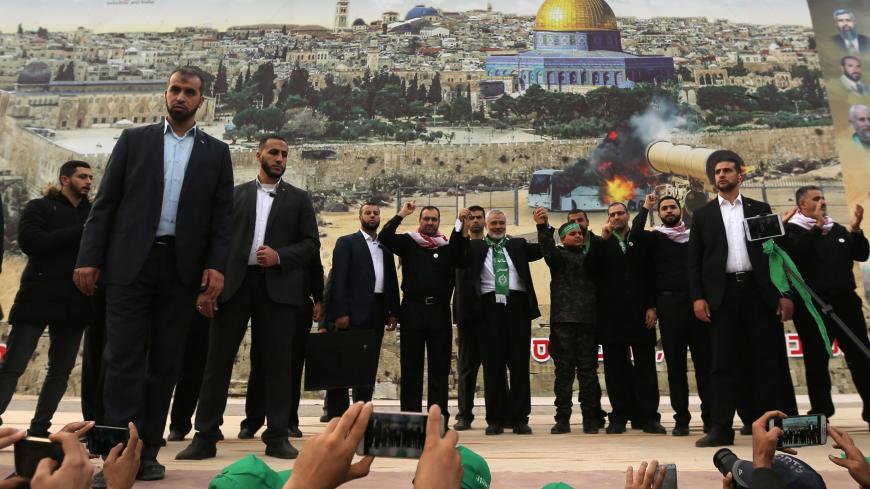 On Dec. 17, Palestinian Minister of Civil Affairs Hussein al-Sheikh met with top Civil Administration officials in Jerusalem to give them an overview of the miserable state of affairs in the Palestinian Authority (PA). After news of the meeting became public, Sheikh told the Palestinian Ma'an News Agency that Egypt and Jordan had asked him to warn Israel that if it continues its policy of opposing Palestinian President Mahmoud Abbas and the PA, it would have to “bear the consequences.”

Israel maintains an open channel of communications with Egypt over the situation in Gaza and is also in contact with Jordan. So it is doubtful that either of those countries pressured Sheikh to meet with the Israelis. It is far more likely that this was Sheikh’s way to justify the meeting. Given the current situation in the PA, any contact it initiates with Israel could be interpreted as collaboration with “the enemy.”

Ever since he was first appointed president in November 2004, Abbas has never been as weak. In contrast, Hamas is on the rise, not only in Gaza but also in the West Bank. Sheikh is seen by the Israeli colleagues as someone whose assessments are trustworthy. When someone like him warns Israel that it will have to “bear the consequences” for its actions, what he is actually saying is that if Israel continues behaving toward Abbas as it does now, it will find that Hamas has replaced him and is now sitting along its fences in the West Bank, just as happened in Gaza in 2007.

In January 2006, Hamas won the election to the Palestinian parliament with 74 seats to Fatah’s 45 seats. It is worth noting that Abbas was forced by President George W. Bush to call these elections to signal that he was upholding democracy in the PA In the time between his announcement of elections and the date that they were held, Israel withdrew from the Gaza Strip during what became known as the “Disengagement” in the summer of 2005. As far as the Palestinians were concerned, the Disengagement was seen as a Hamas victory over the Zionists. They succeeded where Abbas and his predecessor, PLO leader Yasser Arafat, had failed.

“What did the Palestinian public learn from Israel’s disengagement from Gaza?” I was asked at the time by Sufian Abu Zaida, a senior Fatah official who lived in Gaza (and who was quoted in my book "Getting to Know Hamas"). He answered: “The only thing the Israelis understand is force.”

About a year and a half after seizing control of the Palestinian parliament, Hamas’ military wing staged a coup in Gaza and took control of the local institutions of government in June 2007. One of the reasons that Abbas’ Fatah forces were subdued with such intolerable ease was that then-Prime Minister Ehud Olmert decided to impose sanctions on the PA in February 2006 in response to the Hamas election victory. The result was that Hamas got stronger thanks to money and arms it received from Iran, while people working for the PA did not get their salaries because Israel placed a freeze on the transfer of tax money to the PA. At the time, Mohammed Dahlan, then a Fatah senior, pleaded with Israel to allow the transfer of arms, ammunition and military equipment to the PA so that it could prepare for an armed conflict with Hamas. Olmert said no.

So, while Hamas had access to up-to-date military equipment, the PA’s security forces, including the Palestinian Preventive Security forces, were armed with old rifles and a limited number of bullets. But what caused more harm than anything to the PA and contributed to the humiliating defeat in Gaza was low morale. The Palestinian security forces were hungry and hopeless. That’s how Israel got Hamas on its border with Gaza. The rest is history.

Has Israel learned its lesson? As it turns out, it has not. To paraphrase Abu Zaida’s remarks 13 years ago, all anyone can do is wonder what the Palestinians could conclude from the Israeli government’s current attitude toward Hamas when compared to its attitude toward the Palestinian Authority and West Bank residents. Once again, the answer seems to be that the only thing Israel understands is force.

Israel had authorized the transfer of suitcases full of cash to Hamas so that it could pay salaries, practiced almost complete self-restraint when facing hundreds of rockets fired into its territory, and continues to avoid for weeks now escalation that would lead to an armed conflict with Hamas' military. At the same time, the Israel Defense Forces conduct arrests in the West Bank on a daily basis and target people suspected of planning and carrying out acts of terror. Similarly, Israel allows the demolition of homes in the West Bank like it would never dare allow in Gaza, and it humiliates Palestinian Abbas day after day. All the while, Abbas declares that he is opposed to armed conflict with Israel and even engages in security coordination “with the enemy.” And yet he is still accused by Prime Minister Benjamin Netanyahu and his ministers of inciting terrorism. “I think it is too much to expect condemnation from the [PA],” Netanyahu said at a meeting of the Likud after the attack at the entrance to Ofra on Dec. 10. “They only contribute to incitement here,” he added.

At a meeting of the PLO Central Committee Dec. 13 in Ramallah, senior Fatah officials claimed that extremist Jewish organizations supported by the Israeli government are calling for the assassination of Abbas. Senior officials in the Central Committee went on to warn that Israel would bear full responsibility for the results of its incitement.

Meanwhile, Abbas and the PA are considered pariahs by the Israeli government. There is no dialogue with them about what the future holds in store, nor does it look like there will be dialogue with them anytime soon. The consequences of this are as would be expected.

On Dec. 16, Khalil Shikaki’s Palestinian Center for Policy and Survey Research released the results of a comprehensive poll, which found that if elections were held now in the PA, Hamas Chief Ismail Haniyeh would defeat Abbas by 7 points (49% to 42%). Furthermore, some 75% of the respondents want Abbas to resign. It is the highest percentage opposed to Abbas since he took office in 2004. The mood on the ground is one of disappointment with the PA’s rule, largely because of the weak behavior of its leadership when dealing with Israel as compared to the Hamas leadership in Gaza. Hamas has managed to force Israel’s hand and set red lines.

It was against this background that Sheikh met with his Israeli colleagues to warn them about the consequences of their attitude toward Abbas and the PA. He told his counterparts that if Israel does not stop incitement against Abbas and limit military activities in the West Bank, including collective punishments, they should not come crying later when they get Ismail Haniyeh instead of Mahmoud Abbas

Netanyahu has enabled far-right HaBayit HaYehudi to promote populist decisions against Palestinians in the West Bank in the Cabinet and the Knesset. The expected consequences of such decisions or of the Israeli policy will not necessarily force him into action, and it is not likely that he would try curbing them. As past experience shows, Israel will continue to bolster Hamas and weaken the PA, only to claim later that it had no one to talk to.