Netanyahu's stab at premier for life

Ahead of Israel's next elections, Prime Minister Benjamin Netanyahu is pushing a bill that would limit the task of forming a coalition to a party leader. 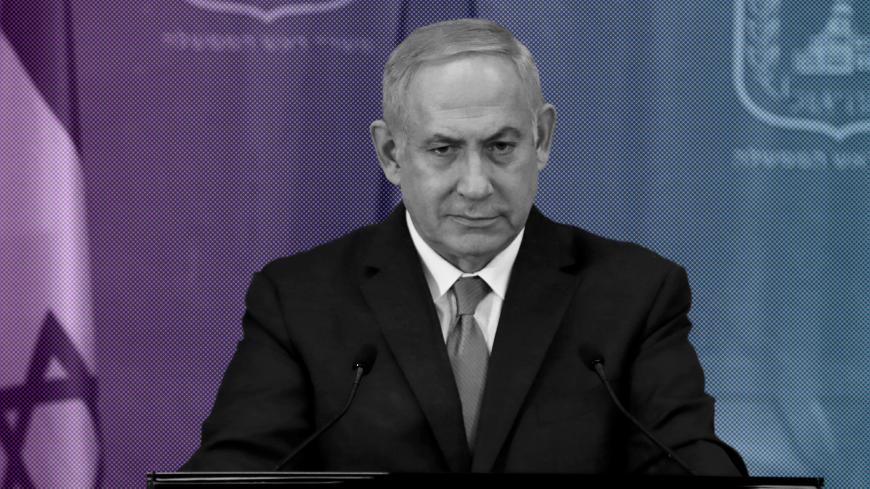 The public indifference to the Dec. 2 police recommendations to indict Prime Minister Benjamin Netanyahu on charges of bribery and his continued strong standing in the polls bring to mind a statement presidential candidate Donald Trump made in January 2016: “I could stand at the middle of Fifth Avenue and shoot somebody, and I wouldn’t lose any voters.” Benjamin Netanyahu can lash out at police, grant seals of approval to European anti-Semites, incite against human right activists, insult a social activist from the border town of Kiryat Shmona, send his wife on a diplomatic mission to Guatemala, and still not lose voters. The recurrent mantra in Israeli discussions on the matter goes like this: “True, he is corrupt, but do you have anyone better?” The answer is usually a nod of agreement.

While President Trump’s opponents can pray that the findings of special counsel Robert Mueller and his team will hasten the end of his presidency, Netanyahu need not rush to apply for unemployment benefits. Also, although the Democratic Party, which represents an alternative to Trump administration policies, has succeeded in taking over the House of Representatives, the left-wing parties in Israel are not really threatening the ruling coalition of the right wing and the ultra-Orthodox. Each corruption scandal seems to further strengthen Netanyahu’s support. He has broken all records in the democratic world in terms of the number of criminal cases he faces and the number of government portfolios he holds, all at the same time.

Absurd as it sounds, if indicted, Netanyahu would only have to give up his jobs as minister of defense, foreign affairs, health and immigrant absorption. By law — and some would say by virtue of a ludicrous loophole — a prime minister is the only public servant who can split his time between his government desk and a defendant’s table.

Netanyahu is not worried about the impact of his legal woes when it comes to Likud voters. So what if in 2008 Netanyahu said that there was concern about “a prime minister up to his neck in investigations making decisions based on his personal interest of political survival and not on the national interest.” He was talking about a prime minister named Ehud Olmert, his predecessor, not about himself. When it comes to Netanyahu, the national interest is for the Netanyahu family to live forever at the prime minister's official residence in Jerusalem, even if a court — which, “everyone knows” is controlled by a bunch of leftists, as Netanyahu’s associates claim — rules that it is a crime family.

Nonetheless, Netanyahu is concerned about the risk of Reuven Rivlin refusing to go down in history as the first president who tasked a man with so many skeletons in his closet with forming a government, the next occasion likely being after elections in 2019. Traditionally, the president has handed the task of putting together a government to the head of the party with the largest number of Knesset seats. Current law, however, does not oblige the president to adhere to that criterion. He can actually task any Knesset member who according to the president’s estimation has the best chances of succeeding at forming a coalition.

Netanyahu believes the Likud will do well in the next elections. To forestall the possibility of the president assigning another member of the Likud leadership to form the government, Netanyahu spread a rumor in October that a “former Likud minister” was plotting against him along with others in the party. He was referring to former Education Minister Gideon Saar, a popular figure in the Likud, claiming that his cabal would wait for Netanyahu to win a sweeping victory for the Likud and “then make sure that I am no longer prime minister.”

To plug the appointment “loophole,” as Netanyahu called it — or as others see it, to limit the president’s authority in the matter — Netanyahu on Dec. 9 rushed a proposed bill through the government’s Committee on Legislation requiring the president to assign the task of government formation to the head of one of the parties contesting the elections. This is a safe bet given the Likud's ongoing, strong lead in the polls. The preamble to the proposed law explains that the existing law could result in an absurd situation whereby a Knesset member who is not head of a party would be named to form the next government even though he or she did not run at the head of the party list as its candidate for the premiership.

The new law could, however, present all kinds of difficulties. For instance, what will the president do if the head of the biggest party is forced to step down in the period between the elections and the formation of the next government, due, for example, to a legal or medical problem? According to Deputy Attorney General Raz Nizri, who touched on such a scenario during the discussion by the Committee on Legislation, it could result in another round of balloting.

Despite such substantive difficulties, on Dec. 12 the Knesset approved the initial version of the bill. Sixty members of the ruling coalition parties voted in favor, while 55 opposition lawmakers voted against. The head of the left-wing Meretz, Tamar Zandberg, accused the “spineless” supporters of the bill of providing Netanyahu with a human safety net. The practical significance of the law can be summed up by a biblical quote, from Samson: “Let me die with the Philistines” (Book of Judges 16:30). In other words, “If I’m going down, I’m taking everyone with me.”

Netanyahu will turn 70 in October 2019, but shows no signs of planning to retire. During his first term in office, more than 20 years ago, he said that he would do what needs to be done in his first or second term. “One doesn’t need more than that,” he remarked. “Do the things, and go home — politically speaking.” On that same occasion in 1997, he also boasted about being one of the authors of a proposed bill limiting the prime minister to two terms in office. Since then, however, he has won three additional terms, and more could be in the offing. In January, his Knesset coalition rejected an amendment proposed by Yesh Atid Chair Yair Lapid and Knesset member Merav Michaeli of the Zionist Camp that would have limited the prime minister to two terms beginning with the next Knesset elections.

A position paper issued at the time by the Israel Democracy Institute rejected the idea of a term limit, citing among other considerations the “safety valves” of Israeli law that enable the replacement of prime ministers and serve as sufficient guarantees against the dangers of over centralization and corruption. The institute’s fellows cited the “coalition pressures that led Olmert to step down over suspicions of his involvement in corruption scandals.” Members of the current coalition, however, are competing with each other like courtesans in the emperor’s court to see who can glorify the Netanyahu family the most.

The number of rules designed to perpetuate the rule of a premier who is “up to his neck” in corruption scandals is troubling. They suggest that the defensive mechanisms of Israeli society tasked with safeguarding the democracy are failing.