Creating hipster culture in an old tobacco factory in Sulaimaniyah 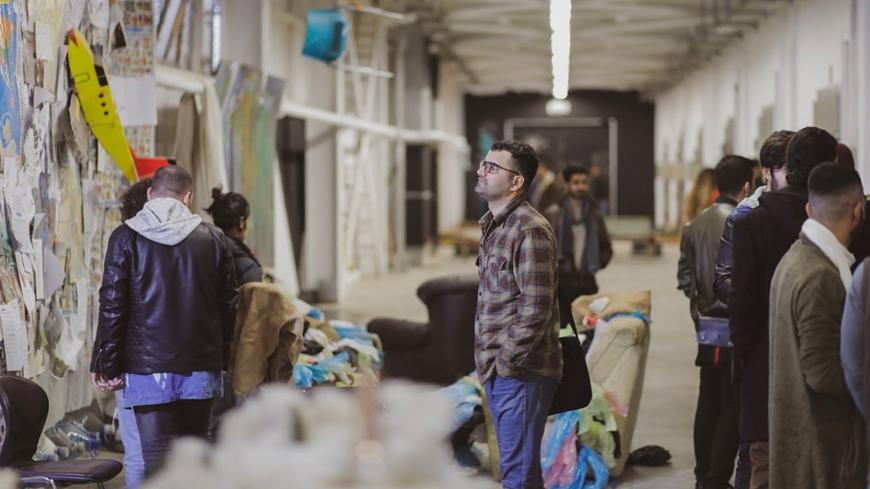 In mathematics, a function is a relation that takes element X and produces value Y. These outputs, whether similar or different, can all be mapped back to the initial input. XLine, a youth group of Iraq’s diverse culturati, is an explicit reference to this mathematical process as they, too, combine each member’s individual inputs to produce a collective, creative economy that they hope will transform the country.

Over the next month, XLine members are celebrating their organization’s second anniversary through a series of performances and exhibits to engage the wider public. Based in Sulaimaniyah’s cavernous — and now defunct — tobacco factory, XLine hopes that these events, which started in mid-December and will continue until the end of January, will inspire local communities to get involved in creative activities.

XLine’s founder, Shero Bahradar, told Al-Monitor that after holding workshops for artists, "we have opened our doors to the general public a year ago. Iraqi youths now can enter our space, get inspiration from our projects and experiment themselves.”

He moves physically and verbally from one subject or room to another, mercurial in his thoughts and words. Bahradar explained that he got the motivation for XLine because his fellow artists and creatives were idly waiting by for a “bolt of lightning” to hit them. XLine, according to Bahradar, provides that dynamic. Iraqi youths in Sulaimaniyah now can come and exchange ideas and debate, pick up their pens and brushes and work on their projects.

The launch of this youth initiative was a feat in its own right. Shirwan Can, a lecturer at the Sulaimaniyah Institute of Fine Arts and an adviser to the group, told Al-Monitor, “These young artists have managed to create a hipster sub-culture that isn’t Kurdish or Arab,” transcending the identity politics plaguing Iraq and much of the world.

Can continued, “XLine may be the first self-organized youth community in Iraq. Typically, youth groups here are affiliated with a political party or, at least, an NGO. But XLine has been able to be independent and manage themselves.”

The group currently has around 40 active members, with projects ranging from the building of the city’s first (and only) skate park to the making of a design studio. Shatoo Gurji, an English-language instructor at Komar University with a desire to design, uses the studio to paint and decorate denim jackets. She told Al-Monitor, “XLine has had a monumental impact on me. It has given me an opportunity to develop my raw talent. It sheltered me from [Iraq’s] chaotic society so that I can simultaneously fail and grow.”

Artistic communities can often come across as insular and elitist. Recognizing the pitfall of becoming an insulated bubble, XLine is fighting this notion by trying to be accessible to all youths. The current series of events encourages greater participation by the public. The opening event on Dec. 7 was a cultural smorgasbord, featuring an acoustic string concert, a photo exhibit, a pop-up cafe with a discussion on the solar system and even a sparring match.

Aland Ali, part of XLine’s media team, told Al-Monitor, “We are trying to disrupt old ways of thinking to help Iraq grow.” Someone at the event told Al-Monitor how grateful he was for XLine’s invitation; even though Sulaimaniyah is considered the capital of culture in Iraqi Kurdistan, it was the first art exhibit he had ever attended.

These open events provide the public a way to engage with the artists of XLine, which may lead to meaningful dialogue to create a more tangible connection and bring the various initiatives alive.

XLine may be the first experiment of its kind in Iraq. Members meet regularly to discuss and collaborate on projects. XLine acts as the hub with several facets. For example, Aland spends his time with the Andromeda Team, a subgroup of photographers, videographers and designers who make short videos. Their latest film, “Lobotomy,” was shot entirely on the grounds of the tobacco factory and will be screened in coming weeks. Mohammed Aouda does graphic design for the team, making posters, logos and graphics to highlight members’ work and increase XLine’s overall visibility on social media. He excitedly spoke about the critical approach he has taken to the group. He told Al-Monitor, “We encourage each other to take open, even fantastical, approaches to solve problems, even to the smallest issues in our community,” before he drifted off to discuss French salon culture and the subjectivity of time.

Iraq has seen a menagerie of war and revolt for most of its modern history, leaving a population still reeling in fear. One XLine member, who asked not to be named, told Al-Monitor, “Still to this day, my father makes sure his car’s gas tank is completely full each night, just in case we have to flee.”

During the first exhibition on Dec. 7, various members of XLine hurried around, showing off their paintings and jewelry designed inside their workshops. In stark contrast to the fatalism of their parents' generation, the young members of XLine are filled with an effervescent optimism. They are excited to take risks, even if they are not exactly sure where it will take them. But, perhaps, even just the chance to contemplate and create is worthwhile enough for these Iraqi youths.