US President Donald Trump's surprise visit to Iraq was met with great offense and criticism with wide regional implications. 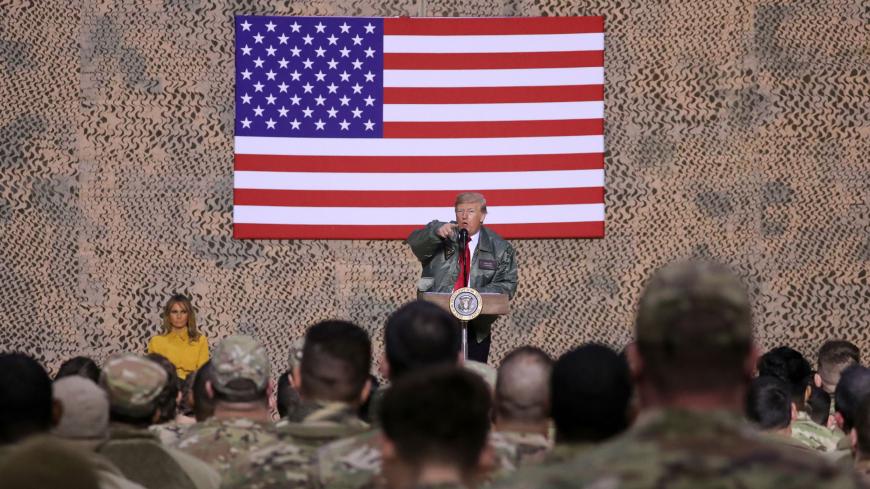 US President Donald Trump's surprise visit to Iraq on Dec. 26 — and his break with protocol by not meeting his Iraqi counterpart — has caused an uproar among politicians in Baghdad, with parliamentarians demanding the expulsion of US troops.

The US president landed directly at al-Asad US military base in Iraq's Anbar province to meet troops for the Christmas holiday. He did not, however, visit Baghdad nor meet any Iraqi officials.

Trump's first visit to Iraq comes after he faced criticism at home from the public and some in the US military for not visiting American troops in conflict zones since taking office in January 2017. This visit was brief, with Trump spending only a little over three hours at the base, and he visited no other sites in the country.

Iraqi Prime Minister Adel Abdul Mahdi was the only Iraqi official to spoke with Trump during the visit, in a phone conversation at the end of his trip. The two had planned to meet, but the meeting was canceled due to disagreement over the location. Trump wanted Abdul Mahdi to meet him at the US base, while the Iraqi premier insisted Trump come to Baghdad.

During various trips to Iraq between 2003 and 2008, former US President George W. Bush met with the former Iraqi President Jalal Talabani and former Prime Minister Nouri al-Maliki at the Ain al-Asad military base. But as the country's security situation and political stability improved, Iraqi officials have pushed for visiting US officials to meet in Baghdad instead of at American military bases.

According to a source in Abdul Mahdi's office who spoke to Al-Monitor in the condition of anonymity, Abdul Mahdi expressed his discontent over Trump's not visiting Baghdad. Trump expressed regret at not being able to visit Baghdad due to security concerns and invited Abdul Mahdi to visit the White House.

The pro-Iran military faction in the Popular Mobilization Units, Asa'ib Ahl al-Haq, praised Abdul Mahdi's refusal to meet with Trump at the base. The head of the group, Qais al-Khazali, slammed the US president for “breaching Iraqi sovereignty" and said his bloc will work in the parliament on a plan to eject US troops from Iraq. He added that his military forces know how to kick the US troops out through "other means" if US refused to do so.

A day after Trump's visit, a number of rockets were fired on the Green Zone close to the US Embassy in Baghdad. There were no causalities.

Trump has stated that the United States has no plans to withdraw from Iraq despite his recent decision to pull all troops from Syria.

Prominent Sadrist Movement leader Hakim al-Zameli also demanded that the Iraqi government and parliament work on constraining the government's relationship with US troops and formulate a plan to eject them from Iraq.

The Bina Coalition that formed the current government in alliance with Muqtada al-Sadr's Sairoon alliance also asked the government to summon the US ambassador to express Iraq's rejection of Trump's visit. It also called for a complaint to the UN about the visit not being organized with the Iraqi government, though Abdul Mahdi claimed in a statement that Trump's visit had in fact been organized with his government.

Former Prime Minister Haider al-Abadi was among the Iraqi officials who spoke out against the way the US president conducted the visited, saying that Trump's trip “does not fit with diplomatic norms" and that it harmed US-Iraqi relations.

Maliki's State of Law Coalition citicized Abdul Mahdi's weak position against the Trump visit and demanding that the Iraqi government eject US troops, as Maliki did in 2011.

Trump's unorthodox conduct in his visit to Iraq, coupled with his indifference toward Middle East developments, could well weaken the US position in the region and as a result empower US rivals.